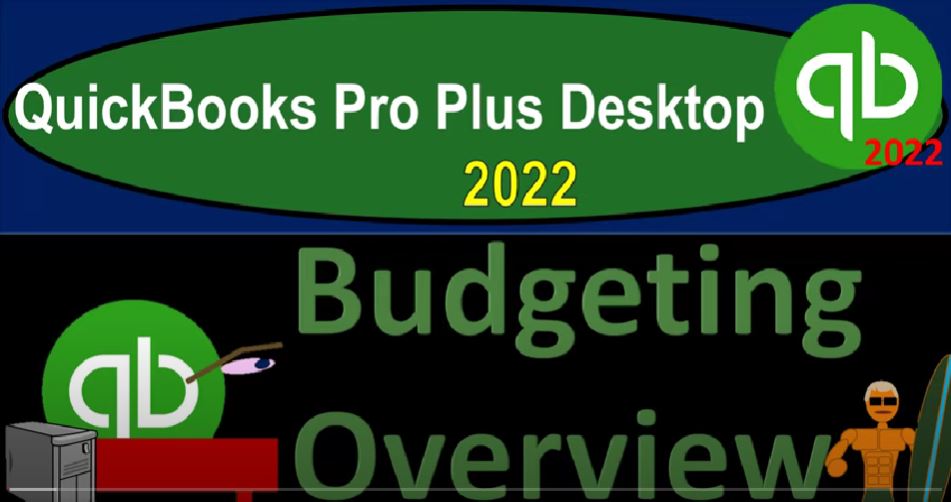 QuickBooks Pro Plus desktop 2022 budgeting overview. Get ready because we bookkeeping pros are moving up the hilltop with QuickBooks Pro Plus desktop 2022. And we are in our get great guitars practice file going through the setup process with the view drop down the open windows list on the left hand side company drop down homepage in the middle maximizing it to the gray area.

We’re going to the reports drop down company and financial looking at that balance sheet standard customizing it up top with a range change from Oh 1012 to 2002 20 822. Then go into our fonts and numbers changing the font size bringing it up to 14. Okay, yes, please. Okay, reports drop down again company and financial this time profit and loss with a range change from a 101 to 222202 28. Do two, then we will customize the report up top fonts and numbers changing the font size on up to 14.

And okay. Now we’re going to be discussing the overview of the budgeting process. Note that these reports that we’re putting together were constructed from past data, that being the primary function of accounting software such as QuickBooks, when we’re thinking about budgeting, we’re thinking about projections into the future. So we can use QuickBooks in order to help us with the budgeting process.

So that means that the actual construction of the budget is something that oftentimes would be done externally outside of QuickBooks, we might use something like Excel, it’s going to be a good tool to be creating the budget information. How would we and then once we have that budget constructed, then we can take that information and put it back into the QuickBooks which is the data input of that data, allowing QuickBooks then to do what QuickBooks does well, which is generate reports.

we can enter the budget by going to the company drop down, and then we go to the planning and budgeting and then you could set up the budget. Now we’ll set up the budget in future presentations, but just real quickly, in thinking about setting up the budget, you do want to keep it kind of separate from what the accounting data input normally is the accounting process is the is the process of taking current data and past data data as it happens, putting it into the financial system, so that the system can create the financial statements ultimately from it, from which Once created,

we can make decisions on them. So that means that the budgeting process is usually a process that you know, management is going to be taking taking the past data and then projecting out into the future based on both past data and any changes that they think are going to be made in the environment in the future and so on.

So, the idea of the concept of actually constructing a budget is something that you can get more into theory and that theory crosses over the kind of overlap between the fields of accounting, the accounting process, which is basically recording data usually thought to be recorded past data, and what you can think about as managerial accounting, it could be sometimes be called, or possibly finance or corporate finance,

which is more future driven. Those are those are using the financial data in order to make future decisions. future decisions, like marketing decisions, like you know what, how much machinery they’re going to be purchasing one year or the other increasing or decreasing resources in order to project what they want to do in the future based on the conditions in the future. So that means that from a data input standpoint, we would basically get the past data and then use it to project out into the future and then try to take that from from like an accounting standpoint.

Take those projections, put them into the software so that we can then do what we do will with regards to the software, which is those comparative reports. Now, when you think about a budget, we have our main two financial statements, we’ve got the profit and loss, and we’ve got the balance sheet.

So usually, when you start the budget, you’re going to look into the past, possibly for the full year into the past, if you’re doing a year’s budget. So a budget process often happening after the year has closed or towards the end of the year, so that you could project basically 12 months out, and then possibly make adjustments to that budget. at a future point, we’re not going to get into a lot of detail on, you know,

the theory of budget making, because this is the data input side, but we’ll get into a little bit about how the budget might be constructed. And then of course, the first thing that you would do then is look at past data. That’s the starting point. And then so you might export, for example, the profit and loss or the trial balance to excel as your starting point. And then make projections as to what you think’s going to be different. Going forward with your performance from the prior year or prior month.

So if you’re starting, if you’re starting at this point in time, at the end of February, then of course, we’re thinking performance wise, what are we going to do income statement. And if we have this starting point, and then the income statement performance numbers happened, that will put us at an Indian Point, which will be our ending balance in general. So that’s, you know, the concept of the balance sheet.

you might not really spend a lot of time kind of thinking about the balance sheet, you might just be trying to figure what you think your revenue is going to be in trying to maximize revenue and minimize costs, right. And then once you get more more in complex on your budgeting, more precise than you might be budgeting, of course, and then thinking about what your balance sheet would be, you do have the capacity once again to enter the balance sheet budget in information into the QuickBooks system.

But like the income statement, it’s one of those things that you probably do the actual budgeting process to projections outside of QuickBooks, possibly in Excel or something like that, once the protections have been made, then possibly put them into the budgets within the QuickBooks system. So QuickBooks can do what it does good, which is to run reports, run reports, such as the budget versus actual report.

So in future presentations, we’ve only got two months of data in here. So notice that when you’re starting a new company, then the budgeting process might even be more difficult oftentimes, because you don’t have a whole lot of past data to project into the future. But you still want to make projections, because that’s going to get that’s going to help you to focus where your target will be.

So we’ll take our two months of data, what kind of project into the future and think about what we expect to happen. And then as time passes, we’ll basically be comparing and contrasting for the first purposes of this practice problem, we’re going to imagine that we set up a budget before these two months have passed for the entire year for a 12 month time period.

So that’s the basic outline of what we’ll do in the future with and because we don’t have any data prior to these two months, we’re probably going to start with this two months worth of data and kind of imagine that was the prior two months right in the prior period, and then project that forward. So we’ll go into more detail about how that’s going to be constructed and future presentations.