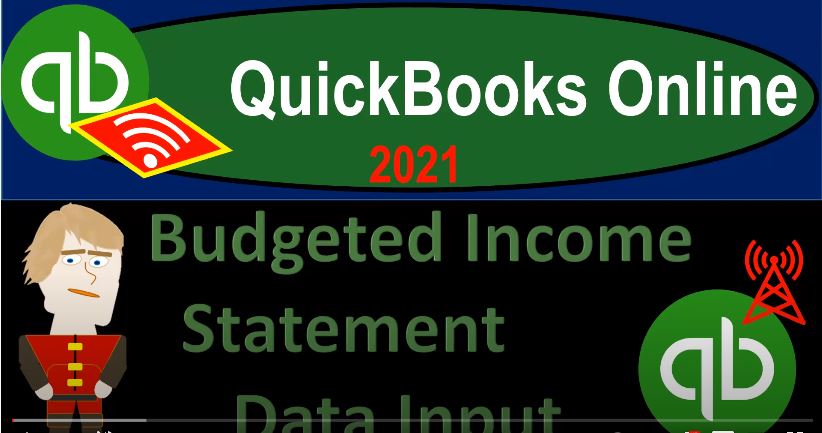 QuickBooks Online 2021 budgeted income statement data input, let’s get into it with Intuit QuickBooks Online 2021. Here we are in our great guitars practice file, we’re going to do the data input for the budget. Let’s first start off by opening up the profit and loss in another tab by duplicating the tab up top right clicking on the tab up top, duplicating the tab up top, we’re going to be opening up the P and L Profit and Loss income statement by going to the reports on the bottom left hand side.

And then we’ve got our P and L will do the good old range to the change up top internet oh two to eight to one, running that report, closing the hamburger holding control scrolling down just scrolling up bit to get to that one to 5%. So this is the starting point that we basically took, we took it in a trial balance format, we export it, then to excel over here, so that we can actually project out what we believe our budget should be.

It’s going to be a monthly budget as opposed to quarterly or yearly. And we’re not going to pre fill any data because we don’t have anything for the prior year. And we’re not going to do any subdividing action here we’re going to keep the default as don’t sub divide, then in essence, we have our income statement line items, that’s grouped in the subgroups down below. And we’re just going to go right through and enter our data. Now if you have two screens, it would be a lot easier to do so. So you can like put this on one side and the other one on the other side.

But we only have one screen. So we’ll do this one at a time, I’ll try to like kind of greenify, the top ones, it’ll be a little bit more difficult for these top lines, because of course those are changing here. Whereas when we get to the expense line items, those are all the same for the most part. And so those will be like easy. So let’s do these top ones up top. And let’s make that green greenify. That one. So we’re in the guitar sales, we’re looking at guitar sales.

Now notice some of these income line items we might not be using, we’ve got all these income line items we’re not using, we could go into Excel and delete some of the accounts that are in excess. Notice we entered a bunch of data already, if if QuickBooks gave us some accounts that we don’t really need, we might want to go in and clean them out, make them inactive, for example, so that they don’t populate here or in other places, you know, get in our way and have us accidentally record to them or something like that. So we’ve got this information, I’m going to go I have to go next before I can do the data inputs, I’m going to say next.

This time, I’ll just greenify what we’re looking at, which is right here are greenify those, so don’t mess up the formatting anywhere else. And then we’re going to be picking up I could also hide these cells. So maybe I just gonna hide these two cells. So I can see the more columns, right click and hide do our data input. And so now we’ve got then the rental income, the 750, same kind of issue. So I’m going to sit down right now I got the rental. So I’m going to start 750 and then again, if it was all the same, I could copy it across but it’s not.

Here, let’s ungratified this and go to the next one, which should be much easier because it’s the same all the way across. So I could just do the copying there, there’s the service item doesn’t change. So let’s go and do that one. That’s the 3345 for the service. So I’m going to say service one is going to be the 345. And that when I could just copy across, and there it is go into the 40,001 40. So I’m going to make this a little smaller. So I could see it on one page 40,001 40, there’s that one cost of goods sold, that one’s going to change because it’s going to change in relation to the sales.

So this is the last one where I think we got this kind of weirdness that we have to do. So I’m going to go cost of goods sold. And notice that the kind of screen change changes they’re trying to help you out. I think when it does that, but it’s a little annoying that it does that I’m looking for the cost of goods sold here, other income cost of goods sold, this is the one we want, I’m going to be picking up then the 1603 eight, so we got 16038, tab tab, and then that one changes then to the 16 838. So then we got the 16838, and so on and so forth.

So there we have it we’re at and notice I changed the last couple to a seven just to the because the rounding doesn’t throw us off or so with a 245 251. And then that totals up to the 245 251 for the cost of the goods that are sold. And then we’ve got the bank service charge, everything else should be much more easy down here. So we’ve got the bank service charge. So let’s scroll down. See if we could find that there it is. And that’s going to be simply the 18. And we could just copy that across 18 copied across these ones are more fun, because we can just copy them across.

So we got the 363 copied across notice all these other kind of cells that we’re not using. these are these are accounts that were haven’t really put anything to we might want to go in and make them inactive because they were given to us by QuickBooks when we set up the account. So you can see how they they make a make it a little bit difficult to do some things. utilities are a little bit more burdensome 634 for the utilities. So here’s the utilities 634 copy it across. And then next one we got is the in the interest, the 326.

I’m okay with that. I’m okay with that. It’s a budget. Okay, it’s a budget doesn’t need to be exact, because that’s the point we don’t budget. So let’s go ahead and save that. Save it. So the budget one has been saved. Alright, let’s save it and close it then. And so there we have it. So then we’ve got our budget here. And now we can generate, of course, reports on the budget. If we want to edit it, then we can edit the budget over here as well.

So now that we have it in place, we can now compare what we have in the budget side of things to what actually happens over time. Obviously, we are imagining in this case that we put the data input before 2021. And now two months of 2021 have passed that being January and February. So we can kind of do a comparison of what we think should have happened to compare to what actually happened and that’s one of the major components or uses of putting this budget information into the QuickBooks system.