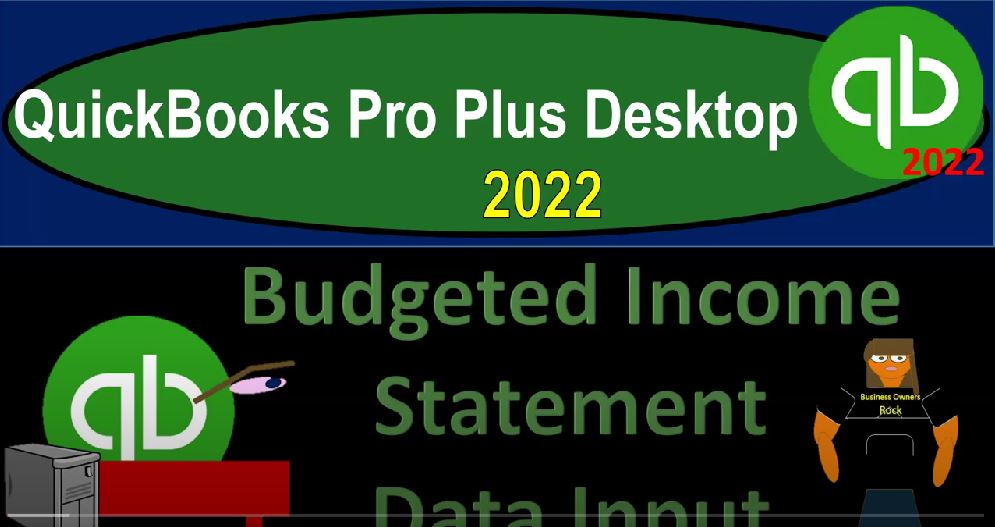 QuickBooks Pro Plus desktop 2022 budgeted income statement data input, get ready because we bookkeeping pros are moving up the hill top with QuickBooks Pro Plus desktop 2022. Here we are in our get great guitars practice file going through the setup process with a view drop down the open windows list on the left hand side company drop down homepage in the middle maximizing that home page to the gray area reports drop down we’re going on down to the profit and loss to start out with profit and loss standard. That is, let’s do a range change. We’re gonna say we’re picking this up from

And we’re going to use that we then did use that to construct a budget over the 12 month time period. So now we’ve got our budget that has been constructed. And now we’re going to take this information and put it back into the QuickBooks system. Just note as well, as we constructed the budget, we kind of assumed that these were the two months period prior to January as if it was like November and December of the prior month so that we had some data to work with.

And then we projected that out for the 12 month time frame. And now we are going to take this information, put it back into the QuickBooks system so that we can have QuickBooks do what it does well, which is to generate reports once the data has been input. So again, notice that this is over and above the normal kind of bookkeeping process, the accounting department isn’t really responsible generally, for the projections that would be made into the future that would take the managerial accounting,

and, you know, possibly finance and whatnot to think about in project into the future. And then once we have that data, of course, we would want to then track it. And that is where the QuickBooks comes back into play as as a shining point. So we’re gonna hit the company drop down, and we’re going to go to the planning and budgeting, planning and budgeting, set up the budgets, and we’re gonna have a 2022 We’re looking at the profit and loss, that looks good.

So we’re gonna say next and says additional profit and loss budget criteria jobs, no, keeping it there, create the budget, this option lets you manually enter amounts, or you can, this option will take the automatically enters the monthly totals from last year, for each account in this budget, that would give you like the starting point, if you had a year’s worth of data, it can take last year’s information and kind of give you that starting point,

which of course you would want to adjust from there, based on the current conditions, we’re gonna keep it up top and just create this whole thing from scratch from what we put into the Excel sheet. Let’s close the caret on the left hand side. Here we have our accounts, we’ve got the same kind of icons here as kind of like Excel. So I can widen the sales with these three dots. And so now we’ve got January, February on out to December.

And then as we enter this data into these items, it will then populate the total, which they give you up front, which is kind of nice, because that’ll be the total number that we can compare to. So now we’re just going to go back and forth and enter this data into the system. So January, we started with the 1130. So let’s go back on over and say we got the 11301130. And then we have the items down here. If I go back on to it, I could copy it across, or I can adjust the row amounts,

we want to this time adjust the row amounts. And we have here the one month currently selected month. So I’m going to take the currently selected month. And then it says I have to increase each remaining monthly amount in this row by this dollar amount, or percent. So I could put $1 or percent here for the increase, I could do the same for a decrease, decrease each remaining month amount in this row by this dollar or percent and enable compounding.

So what I would like to do is put our percent increase which in our worksheet was here we started with a 105%, which I think here it says we want to increase each remaining by just the 5% 5% and you need a percent sign to make sure it’s a percent otherwise it’ll be $1 amount and so it’s going to increase by the 5%. And we want to enable the compounding so that means it’s going to compound on on itself and instead of putting the 1.5% so I’m going to say okay

So there we have it, it should total out to the 17 986. If we matched it out here, so we got the total on the right in our format 17 986. So that looks like it did what we would expect. Let’s check that off making it green. Let’s make it green. That means we’re done with that one. That one’s done. Dishes are done, that one’s done. And then we’re on the sales item. So sales is our next one. So sales, January, was 29, two to six.

It goes up by 10%, I believe. So we’re gonna say cost of goods sold is here to 2977. These other items are items that are that weren’t, we didn’t utilize, but they’re on the income statement. If you’re not utilizing you could go there on the chart of accounts, you could go to the chart of accounts and remove any accounts that you think are not necessary cleaning this up making it a little bit easier.

We can then say I’m going to adjust this one we’re going to copy it, we’re going to say it’s going to be 10% increase across the board just like the sales item. Okay, that’s at the 491 347. Is that what we have over here? Let’s make this Greenify 491 347. I believe that is the same or approximately so. And then the all the expenses meant much of them are just going to be the same all the way across. So 18 on the bank service charges, bank service charges. Where’s that? Right there?

January 1236, copy it across, copy it across comes out to the 14 832 14 832 that we got here. Pretty darn close, darn close. It’s not just close, it’s darn close, which is like a magnitude of 10 times closer than just close. So then this is going to be then on the insurance we said in February 6000 6000 In February insurance, and then we jumped we took a big leap like a frog, we frog leaped out here to September instead of this another 6000 As if it was like a cash basis thing. So that would be 12,000 total.

And we’ll copy that across same kind of tricky business happened in here. tricky business, then in this is the same month, July 76827682. In July, July, July 768, to copy it across copy 87990, apa check figure, check it out. Double check poor five or 87990. I think that’s the same I can’t remember because I was speaking Spanish. I don’t know how it takes a lot of cognitive resources. So telephone, then is that the 385385 is going to be down here. 385 on telephone, we’re going to copy that across giving us a total of 46204620.

We’ll copy this across, copy that Roger out, copy Roger out. Greenify it, there it goes. And that’s the check figure 4620 I think that’s right, pretty sure. And then utilities, utilities, or 385385 on the utilities 385385. And we’ll copy that across 4620, I’m not going to check it anymore, because I’m like, totally confident in myself.

And then down here, we’ve got the internet, it’s the interest expense at the 334334 Internet, or interest expense 334. And that one actually went down. We’re gonna say it’s gonna go down by 95%. Alright, so that’s a little different little new new of new nuance, a new nuance has happened. So I’m going to say currently selected, we’ll make this one decrease by 95%. Now we’ll make a decrease by 5%.

Because it’s 95% of so it’s going to decrease by 5%. Think that’s the same enable the compound in, check it out. 7070. Is that right? Is that right? Let’s Greenify these 27070 Pretty close. I’m okay with that. All right. So then, then, of course, we can generate the report. So I’m going to say okay, we’re going to say,

And then we got our totals, you can kind of check your totals down here. So they went to eight, seven, and 1137013 January 1287 versus the 1370 Something looks something looks a little different. So if something’s different, we could go back in and fix it. So I’m going to put try to do a side by side thing, but it’s making it difficult.

And this is how you do that. You go to the company drop down. And then you can go back into the budget, anytime you want. Setting up the budget, going down to utilities, and we’re going to change this to a different number 634634634. And then we’ll copy that across, copy that across, and save it. Okay. Now, now, what are we talking about? This time? So now we’re at the 31037 looks pretty darn close if you ask me. So the next one’s going to be the two three to 63449863318242.

And let’s go on this side, can I do that? Second, a mess anything up. And then here, this one is 10 to 40, and then 11. And then 13. I should just check the total, right? That’s what I should be doing. This is tedious. This is all working good. It makes me feel good, that they’re all pretty. They’re all working. So that’s good.

As long as it 125 966. So everything looks pretty close, because this should be 125975 about this minus this $9 It’s a budget budget $9. That’s like nothing for budget term in budget terms. So there were so there it is the next time we’ll analyze those budget reports, which we have the which we have this budget overview and then of course the budget versus actual which will have for those first two months worth of data