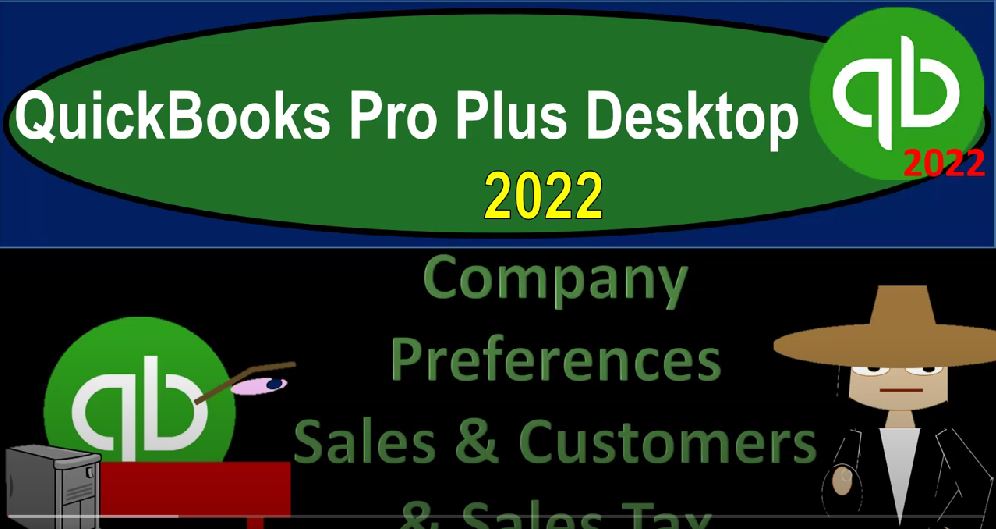 QuickBooks Pro Plus desktop 2022 company preferences sales and customers and sales tax and get ready because we bookkeeping pros are moving up to hilltop with QuickBooks Pro Plus desktop 2022. Here we are in our get great guitars practice file going through the setup process with the view drop down the open windows list left hand side company drop down home page in the middle maximize on that home page. Go in then to the Edit drop down to get down to the bottom with those preferences we’ve been looking at.

We’re looking at the sales and customers and then the sales tax to tabs up top my preferences first item add available time slash cost to invoice for this selected job options prompt to do so don’t add any or ask what to do, we will keep the default. I’m going to close this out for a second, noting that if you were to run this timesheet down below and enter time basically like a time clock for employees or for the work that has been done. You can also add that or prompt it to add that to an invoice when you create the invoice.

Also, if you were to enter a check or a bill and assign it to a customer or job, then you can prompt it to then be added then to the invoice as well we might go into that in more depth in a future point. But now we’re going to go to the Edit drop down Preferences again, we’re going to go to the company preferences this time sales forms. So we got to use the shipping method.

So you can select a shipping method to use usual FOB for the shipping terms warn about duplicate invoice numbers, we’ll keep the default on that’s a good internal control to have choose template for invoice packaging slips. So there’s another template that we could use, we’re going to be using the default here. So Intuit packing slips default. And we’ll keep that as his collection center enable collection center, we’ll keep the default off, custom pricing, no custom pricing, or enable price levels, we’ll add the price levels here or enable them.

And we’re not going to get into a lot of detail in this practice problems with those different price levels, we might look into that in a future section in of itself. But those are gonna be those options. Let’s go to the sales tax. Now. Sales tax, let’s start off with the first tab, my preferences, nothing in it, go into the company preferences, sales tax would have to be turned on if you are subject to sales tax in the United States, the sales tax is something that’s going to be on the state and local side as opposed to the federal side, which is in essence, generally an income tax.

If you’re in other countries, you might have some other usage tax, which is similar to the setup process for a sales tax. So we’re assuming here we’re in California, of the United States, we’re just going to assume in essence, the United States, and that will give us our blanket coverage and assume that somewhere we have a sales tax that sales tax rates could be different. But the general idea being being the same concept of this kind of usage tax, I’m going to turn it on, we’re going to say do you have sales tax, I’m going to say yes, then it says set up sales tax item, add a sales tax item for each county, district, parish, etc.

We’ll go back to this, I’m going to come back to this in a second and add those but before we do, let’s go to the rest of these items. Sales tax code, determine if the items you sell are taxable or non taxable. So the taxable item code is going to be just tax. Now the tax looks like it’s maybe not as descriptive as it could be because it doesn’t give you really the kind of tax but it’s nice in short, and when you see it in the context of where it will be used typically being an invoice or sales receipt, you know that the tax at the bottom of an invoice or sales receipt will be sales tax. So it’s usually a good reference to use in that instance. And then if it says if it’s not taxable, it’s going to be non in Oh in as a non taxable item.

So those are going to be the references on in essence, the invoice in the sales receipts. When do you owe sales tax as an invoice date or upon receipt of payment. So in other words, next thing you got to do is determine how the sales tax is going to be calculated. This might be something that will differ from state to state locality to locality. If it’s on an accrual basis, then you’re going to be incurring the sales tax. For example, when you create an invoice even though you haven’t yet created it received the cash, because that’s when in essence you did the work.

And that’s generally the document recording revenue at that point in time, even though cash has not been received. If on the other hand, it’s on a cash basis, then when you enter the invoice, you would think that you wouldn’t still owe the tax on it until you actually get paid. So in terms of the flowchart here, you’d be looking at the invoice making the sale versus the receiving of the payment.

Or if you have a create sales receipt, you get paid at the same time like a check register, like at a register situation, then obviously the sales tax would be received at the same time and it would didn’t really matter on those two options in that case, because you would be using a cash basis system, just by your normal accounting process, then the question is, what are the requirements to pay the sales tax, generally your sales will be going up, let’s get, for example, the the month of January,

and sales go up for the entire month of January, then you’d have to calculate what all the sales were and the sales tax on it, which would be increase in a liability account, as we’ll see, when we go through the practice problem, increasing the liability account. And then at some point after that period has ended, possibly by the end of February, if we were on a monthly basis, we would have to pay the sales tax that had accumulated in January to the government to the state and locale, generally, for the United States.

If on the other hand, we have less sales tax, usually, if you have less sales tax, that is oh, they might allow you to do a quarterly kind of calculation, in which case, we would be adding up the sales for the entire first three months. 12 divided by four is going to be three months, January, February, March, and that it would probably be due the month after that in April, we’d have to pay the sales tax that we had been collecting for the first quarter the first three months, or you might have an annual, we’re going to keep it on a monthly basis. For our purposes here, let’s add a sales tax item.

So we have a generic type of 5%, that we can charge to see how the sales tax will be applied, noting that the sales tax will differ from location to location. So let’s make this one 4%. The next one will be 1%. The agency then is going to be the vendor that we are paying. So we are in essence setting up another vendor. And I’m just going to call this California Sales Tax Department report meant that’s a generic name, of course, because this is just a generic sales tax, because it will differ from state to state.

So we might have California sales tax which you might also want in the name the city but we’re going to keep it at that. And then we’ll call it this description California sales tax. And then I’m going to select in the drop down here, the two taxes which will be the state tax, and then the city tax. So you can add it up, it adds up to then the 5% which is the amount we should see then on the invoices and the sales receipts that we will be collecting from customers, increasing the payable that will then have to pay and in theory to these two different tax collecting departments. So I’m going to say okay, and then we’ll say okay, let’s apply that out.

And so make all existing customers taxable. Notice that the sales tax is going to be applied generally to all customers, and it’s going to be driven by the items that we sell, whether they be taxable items or not usually inventory items more likely to be taxable, but there could be some customers not subject to tax, in which case we would have to mark them as not being taxed. We’ll talk more about that in a second. Make all existing non inventory Inventory ports taxable. So I’m going to keep that checked off. For now at this point, we don’t have any items set up at this point.

So it won’t, it will not really matter. But let me see what what the impact will be, we’re going to say, okay, and the QuickBooks must close all the windows, I’m going to say, OK, now the other two components, once you turn on the sales tax will be that we’re going to go to the lists drop down, and we want to like look at the item lists, we’ll set up more item lists later. But you can see here we got the tax item lists here with regards to the taxes, then we would have the inventory items and the service items, these would be if I said new item, I’m not going to create a new item, but just look at the creation of one, we would then have, say an inventory part versus a service part.

And then we can choose down here whether that inventory item would be taxable or not in the US, typically, the service items are more likely not to be taxable. And the inventory items are more likely to be taxable. If I set this item as a taxable item. And then I use it for example, to create I’m going to go to the company drop down homepage and look at an invoice if I was to create an invoice, then, for a customer with a taxable item on it, you can see at the bottom of the invoice, we have this option for it to be taxable or not with this drop down.

So here we have our tax, and we would be applying out the group tax which would be that 5% tax at the bottom of the invoice, applying it out here unless the customer was assigned not to be taxable. So now we’ve turned on the sales tax, the item would drive whether or not the customer would be sales tax applied to the sales tax or not. Unless the customer for whatever reason, we say isn’t subject to the tax. In that instance, we’d have to go to the Customer Center drop down and I add or see the new customer just to see where that would be by go to the new customer up top. And we look at the tax information sales tax setting,