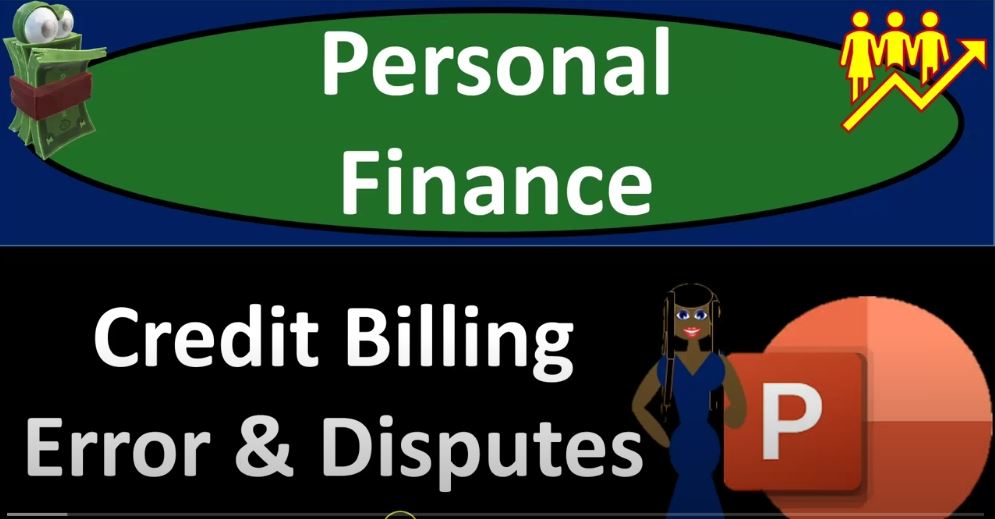 Personal Finance, presentation, credit, billing error and disputes, prepare to get financially fit by practicing personal finance, credit, billing error and disputes. So in other words, what do we do or what should the process be if we have a dispute if we think there’s an error of some kind, with our credit being processed possibly through the credit card, in other words, something’s being charged to us. And we think there’s an error with it process could be notify creditor of error in writing within 60 days.

So we want to notify the creditor, we want to have it in writing so that we can have a log of what we have done the steps we have taken in order to fix the problem so that if it doesn’t go smoothly, we can list out what we have done in order to solve the problem, pay the portion of the bill, not in dispute. So if we think there is a problem, and we have a disputed item, then we want to note what that disputed item is.

And we want to go ahead and pay the bill for the rest of the items to make sure that we don’t have other problems that could be caused from this. In other words, if we were to say, hey, on this credit card statement, for example, I think this one item is in dispute, and all the other items look correct. If I don’t pay the entire bill, or I don’t pay a portion of the bill that we think is correct, then that could hurt our credit in the future, because those are going to be legitimate charges.

So what we want to do then is identify the one that we think is incorrect, notify about it being incorrect, it should then be in processing for them to be taking a look at. And then we want to make sure that we’re still paying the bills as we think is appropriate for the items that are correct. So that we can separate those two types of items and and focus in on the item that needs to be fixed. While not messing up anything else within the process. The creditor needs to respond within 30 days.

Generally, credit card company generally has two billing periods, but no longer than 90 days to correct your account or tell you why they think the bill is correct. So they have to of course respond to it at that point of time, and be able to give you the one of two options that you would expect either we have solved the problem, we agree with you. And we have corrected it or notify you as to why they think it is what they have originally is correct.

And then and then you can go from there and continue to argue through the process at that point, credit billing errors and disputes. disputed items should not affect your credit rating while they are in dispute. So that’s going to be the point, you’re going to want to identify the item that’s in dispute, make sure that you’re still going forward with the payment that’s are not in dispute, that item should be identified by both you and your records as some item that you’ve taken action on and on the credit card side.

And therefore that item should not be an item that’s going to be messing up your credit because it’s going through the dispute process, and therefore is not going to be categorized as a late payment. However, if you were not to pay the rest of the items, which are legitimate charges, and you’re not having any argument about them, then you want to make sure that you’re still paying those items, you may withhold payment on damaged or bad goods or poor services. If purchased with a credit card, you must make a sincere attempt to resolve problems with the creditor protecting your credit rating.

So the next step is to say okay, well what if there’s a problem with my credit rating, of course, if there’s a problem with the credit, I want to make sure that the rating is okay. The creditor generally cannot not threaten your credit rating or do anything to damage your credit reputation while there is negotiating. So basically, again, it’s a go as it’s going through the process.

The goal here is to is to separate this item out so that it’s not going to be something that’s going to be a late payment where they’re going to say hey, you know I, I’m not even going to address your issue, I’m just going to threaten you that if you don’t pay it, then we’re going to have a problem with your credit rating and that and then just pay it anyways right while it’s in dispute, you want to make sure that you’re focusing in on the disputed item, and not just basically taken action to avoid having your credit be penalised. So it shouldn’t affect your credit during that process. creditor generally cannot take any action to collect until your complaint has been answered.

So obviously they shouldn’t be able to take basically collection action until you have answered the dispute defective goods and services. If a sincere effort to resolve a problem with an item purchased has been made, however, the store is not compliant. You may ask your credit card company to stop payment. So that’s going to be one option you have if you purchase something on a credit card, and that’s the item that you have in dispute that’s on the credit card, then you want to basically resolve that with the person who made the charge that’s the first place to go.

And if they’re unreasonable and they won’t work with you at that point. You may ask your credit card company to stop the payment on it and that can be another option that you can go to from their note more and more these days. I think this last option to go to the credit card company comes up when people have those subscription kind of things, you sign up to a subscription kind of thing and then sometimes you can’t even contact them back. You know, you can’t get ahold of them to stop the subscription and they keep on charging you on a monthly item. That’s when that kind of item I think is coming up. More and more