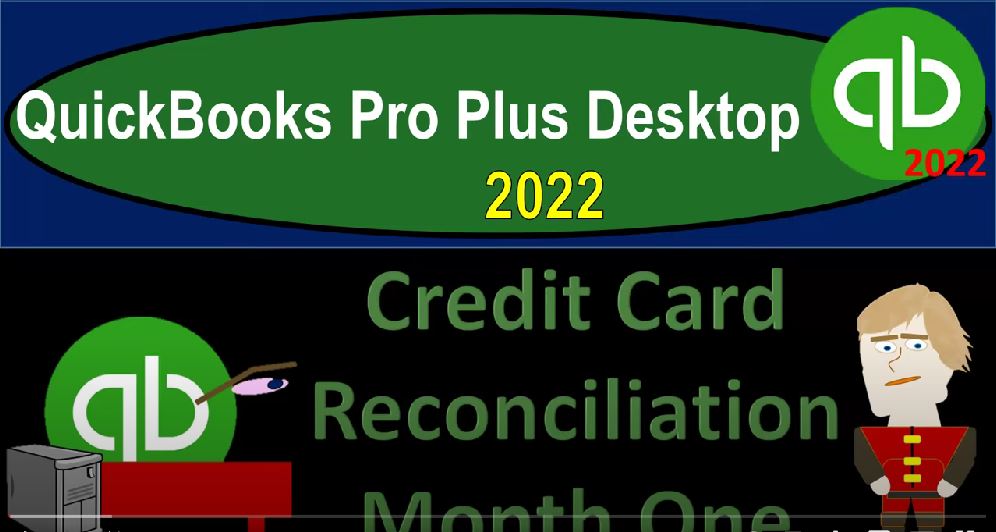 QuickBooks Pro Plus desktop 2022 credit card reconciliation month one, get ready because we bookkeeping pros are moving up the hill top with QuickBooks Pro Plus desktop 2022. Here we are in our bank feeds practice file going through the setup process with the view drop down the open windows list on the left hand side company drop down home page in the middle maximizing to the gray area reports drop down company and financial taking a look at the balance sheet standard.

Okay, yes, please. And okay, reports drop down again, go into the to the accounting and taxes this time with the trial balance and with the range change from a 101 to one to 212. Hold on a second. Oh 101 to one to 1231 to one, then customizing the report up top fonts and numbers, changing the font size bringing it up to 14. Okay, yes, please. And okay, then we want the bank feed center by going to the banking drop down bank feed center, opening that up. And we’re going to maximize that to the gray area, close the carrot on the left hand side,

If I go to the balance sheet, for example, and scroll down, we got the credit card down here that data has been entered. But we don’t have that beginning balance because it’s the first time we entered it. So we have this negative balance for the credit card. So we’re gonna do a reconciliation similar to what you might be familiar with, with a bank statement. This is what our mock credit card statement here.

just like we talked about, like in our normal practice problem, but I’m just going to enter this to get the beginning balance in place, just be aware that you’d like to be starting your new accounting system at the beginning of the year, you know, if possible, so that you can have your cut off starting at that point going forward, all in the same accounting system.

So it gives me a warning. I’m going to say okay, I want to hit retained earnings with it. So there we have it. So we have recorded the opening balance on 10 One and actually I shouldn’t have made it 10 When I should have made it. Let’s change that for a second. It should be the It should be eight 831. Right?

That’s what it should be. Let’s record that, change that. So it’s up top here, it should be up top right there. Okay. So then, if I go back to my trial balance. So now we’ve got, we’ve got the trial balance for the loan for the credit card, it’s at the 627. And so 627. And we’re going to do our our entries now.

So I’m going to the date, the end date is at 930, for our first statement. So let’s go back into the balance sheet and look at it here. Let’s do our customizing. And let’s take it from one one to 930 to one, and I can’t get the date, right oh, 930 to one. How about that? How about that? Does that work? It does. So as of that point in time, now we have the account the credit card at the 756 38.

And does that match what we have here? 756 38. It does. So the reconciliation should be fairly straightforward, you know, at this point in time. So let’s go to our banking drop down. And we’re going to go down to the reconcile banking and reconcile, we want to hit the drop down and reconciled now the credit card. So the credit card, and this is going to be as of Oh 930 to one, you got to make sure that you set that first date, the first starting date will then populate by itself in future reconciliation.

So it should be pretty straightforward. But in that first one, you got to make sure you got the right date. And then we’re going to say that the ending balance is the 75638. So we’re going to say this is seven, five 6.38. There we have that now notice that even though we put the beginning balance in place, it didn’t show up here, it should be that $1,000 that we put into the opening balance,

possibly not showing up because we didn’t do it like right when we started the account. But that’s okay. And that’s a common problem. What we’ll do is we’ll just check it off as we go forward in the first reconciliation, and then everything will be good from there for it. So I’m going to continue on that. And then we’ve got our data.

Now we might want to hide all the data that’s past the current timeframe, the current month that we’re looking at. So there we have it. Now look, there’s that 1000 Right there. And so we have to check, we could check it off, even though it’s not, it’s not in the beginning balance area.

So it’s usually I start here, and then I check everything off. In this case, I’m going to check this off as my starting point. So I’m going to highlight this and say, Okay, we found that, and then go over here and check it off. And then I’m going to go back on over just like we would with the with our bank statement, we generally want to go from the statement back to our books.

On this side, that puts us in balance on down below. And I know I’m not getting into a lot of detail on, you know, the all the formatting of the reconciliations, because we’ve seen that in prior presentations. But the credit card should be fairly straightforward. You don’t have the same kind of timing differences, typically, because it’s all electronic.

And then if I said I wanted to see the both of these bank reconciliations and display those, there, we have them. And we can increase the size. I can customize this thing and say we want to go to the fonts. For example. Let’s bring it up to 14 again. Okay, yes, please. And okay. So now we’ve got the the summary,

No, because there’s no timing differences that are currently in place. So therefore, that is the balance on the statement. And that’s the balance on our books. As we can see here, the 756 38, and the 756 38. These are the new transactions that are taking place. So we really don’t have any reconciling items in that there’s a difference between our books to the bank, we just basically confirmed that we added everything into into basically our system.

And obviously, there’s no reconciling items. Because we took we created in this case, our books from the bank feeds, it’s not like we recorded the items as we would do in a full service system. As we enter the items to the credit card, we enter them on our side, into the into the QuickBooks system, and then verified them to the bank.

Oftentimes, especially small businesses will not do that, you know, they’ll end up this just basically, depending on the bank feeds, clearing for the credit card, and then take that information from the credit cards to compile and create the financial statements. And therefore you’re not going to have those timing differences, the outstanding checks and payments.

Typically, in that instance, if you did, you’d have those reconciling items like you would for the bank statement. So fairly straightforward to reconcile on this case, this would be the more detailed version of the reconciliation as well remember that the reconciliation reports are not the same as the other type of reports, because they’re not something that is constructed as you do the data input.

And part of that is because you want the reconciliation to be printed static, as of the point in time that you do them. Because if someone messes something up by recording something in the past, deleting a transaction in a prior period, for example, then the reconciliation reports would get messed up. If they were just to change along with that kind of change, the reconciliation would be unreconciled at that point, so you have to have the static reconciliation.