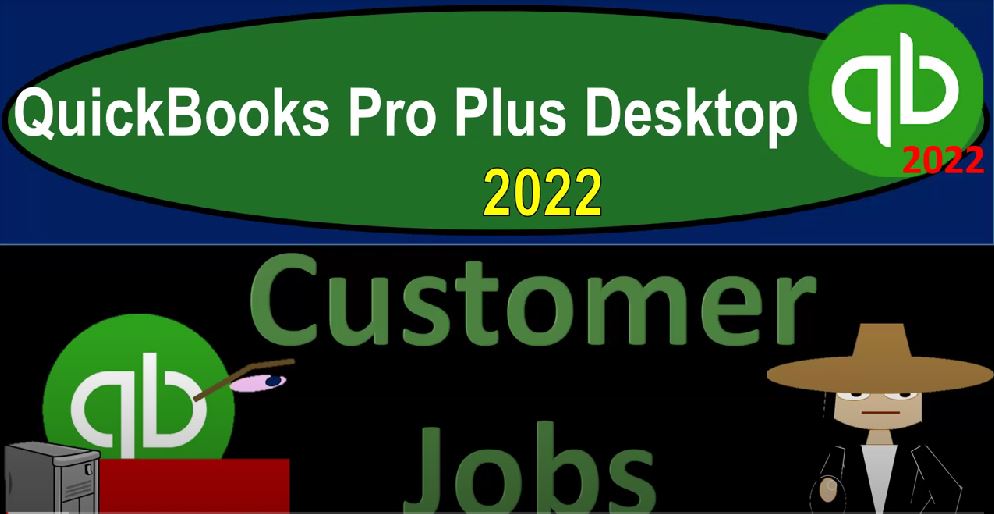 QuickBooks Pro Plus desktop 2020 to customer jobs get ready because we bookkeeping pros are moving up to hilltop with QuickBooks Pro Plus desktop 2022. Here we are in our get great guitars practice file going through the setup process with the view drop down the open windows list on the left hand side, that company dropped down the homepage in the middle maximizing that homepage to the gray area, we’re going to go to the Customer Center by going to the customer drop down and the customer center go into the tab on the left, which is going to be the customers and jobs closing these little caret.

So we can focus in here, we’ve been setting up customers starting out when we set up the company file with the beginning balance of accounts receivable and needing to add customers to apply that first beginning balance. We did that by going to the drop down here, adding new customers, we have also been adding customers after we have added invoices, sales, receipts, and even purchase orders. As we go as we do the data input those customers now listed here on the left hand side, we might have some instances where we need like a job to be set up, we’re going to get into a job cost system, we have a whole course in a job cost systems.

So it’s a specialty field in and of itself. But to get an idea of the difference between a customer and a job is what we’ll get into here, that customer is going to represent the person that we’re actually going to be billing to generally, but we could have a particular job or multiple jobs that we’re going to set up for one particular customer. When we think about a job, we’re often thinking about something that’s going to be for an extended period of time, we’re going to have an extended period of time, we’re going to possibly be billing through that time frame or accumulating the cost so we can determine what the bill will be for that particular job.

If you’re in like construction, that’s a classical kind of job cost type of system, especially if you’re in a long term kind of project system. If you’re going to build a building or something like that, you could see that that’s going to take a long time to do there’s a difference in terms of the revenue recognition process in order to do that, because usually, we get the job done before we recognize the revenue. But if the job is going to take multiple years, for example, then you might have a percentage of completed contract or completed contract kind of system for a job cost type of system. You also might see a similar type of thing, usually not with quite as long a jobs.

But a similar billing kind of process with services such as even bookkeeping, and CPA firms and legal services, where you’re going to be taking on particular jobs like making a tax return or doing some legal case, or something like that, or representing a client before the IRS where you might have a particular client where you have different kinds of engagements for that particular client. And you would like to bill based on the engagement, the jobs that you’re going to be in so the jobs or you could think of them as being subordinate to the customers so that you could track information to a particular job bill out based on a particular job and track in that kind of format.

So we’ll just basically practice setting up the jobs here. And we’ll apply out some expenses to them as we go and enter data in future presentations. So for example, what we could do here is we could put our cursor on the Jones guitars, and if I want to set up a job, which I’m just going to list as a number under Jones guitars, I’m going to hit the drop down thing and set up I want a new job, I’m gonna say add a job police. And then I’m just gonna name the job a number, so I’m just going to call it 3005. We might put more detail than that in it if we wanted more detail, but I’m just going to name it as a number here, I’m not going to put really anything else that company names is going to be the name that it’s going to be the subordinate to.

That’s why I clicked on Jones guitar first. And we’ll keep all the rest of the detail. In essence, the second note that you do have the Jobs tab down here and you could toggle through the job type that you’re gonna have commercial residential, we’ve got the status where it could be pending, awarded in progress or closed, meaning, you know, what’s the status of the project? Is it something that we’re having been pending, we’re trying to get the job possibly sending out estimates, it’s been awarded, if it was like a government job or something like that, we have now been given the job at that point in time.

And then it would be in progress, meaning it’s open, we’re working on it closed, meaning we have fun, we have completed the job at that point in time. So we’ll keep it here for now. I’m just going to close this out and say okay, on down below, and then we got our tabs. So now we’ve got the Jones guitars and the 305. Now if I was to build something if I was to go back on over to the home page, for example, and I was to create a bill so I’m going to create a a bill I’m not going to create an invoice.

We’re going to be billing the client, the invoice being us billing for work that we would be doing and receiving from the client so then we can then say, I’m going to create this invoice to the job you know posting it to the job if I was going to be charging it to a particular job, which you can see has the customer name, and then the job number, we can also see that if I was to close this back out and say I’m not going to record it, that if we were to enter checks, or if we were to enter bills, then we can also make them those billable type of items with this with this item over here.

So if I was to create some kind of transaction, and then I wanted to make it a billable item, let’s say it’s $100, I’m not going to $1,000, we’re not going to record it, then I can charge a customer to it, and then pick the job that we’re going to apply to, and then possibly make it a billable type of item as well tracking the information by job using this then to help us to create the invoice that we would create. So I’m not going to actually post this don’t actually post this, I’m going to close this back out and say no, we can also of course, track the time and apply it out to particular jobs, which would be quite common. If you were in a situation where you had a partnership,

for example, and you’re working at a CPA firm or you’re working at a law firm. And then they build out the staff, the staff then charging third time to particular clients in particular jobs and job costs type of system helping us then to track the time and bill or invoice to clients. Going back on over let’s do one more. And we’ll we’ll possibly record some charges to them in future presentation. So let’s put our cursor on Sam the guitar man and make another job under that customer by going to the new customer, new customer and jobs and new customer.

And we’re going to say this is going to be 4402402. And that’s all I’m going to call it, you do have the job information, I’m going to leave it as is for now however, I’m going to close this item up top now note that if something does go wrong, and it’s listed some other place other than where you want it to be meaning indented under Sam, the guitar man, you could grab this little icon right here and you can use that to pull or move these items. So that’s one way you can reposition it to be the sub account. And that’s why it’s going to be indented here from Sam the guitar man.

So now we’ve got these two jobs set up for the Jones guitars and Sam the guitar man. And we’ll probably set up a couple billable items to it just to practice with that. But note again, if you’re in like a job cost type of system, we do have a course that kind of focus in on a job cost kind of system because that is gonna have some specialty components related to that type of accounting.

And you might have some different record revenue recognition principles if you’re dealing with jobs that are going to be long term type of jobs. And you can also have a situation where you might be using like a class tracking type of situation in a job cost type of system as well class tracking being another component that we have a specialty courses on and they’re kind of specialty areas that can be useful under certain conditions.