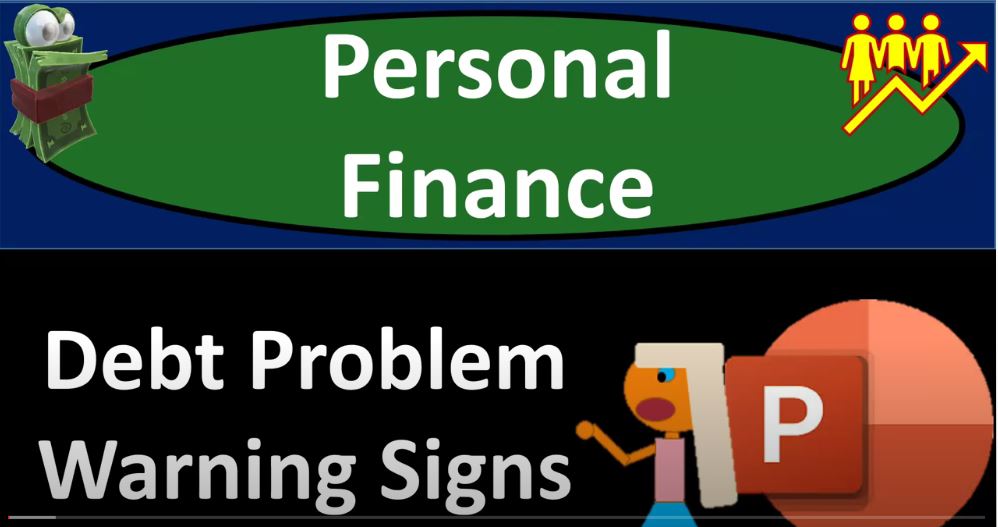 Personal Finance presentation, debt problem warning signs prepare to get financially fit by practicing personal finance, debt problem warning signs, we would like to be able to pick up the earlier warning signs with regards to debt problems so we can make changes and curb our actions before we get into bigger problems in the future. So for example, if you have a warning sign up, say the Repo Man coming and stealing your car in the middle of the night, in order to pay off a secured debt, that would be a later type of warning sign, we’d like to catch the earlier type ones, so that we can take actions to safeguard our credit, and have a better cash flow situation so that in the event that we need credit in the future, we have the ability to get it in the event of an emergency.

So one of the earlier kind of warning signs would be the paying only the minimum balance on say, your credit card type of payments. Now, you might do that from time to time, but you’d like to get to the point where you’re trying to basically pay down the credit card. In other words, if you’re just paying off the minimum balances, that credit card balances could then be increasing if you keep on spending on them. And compiling on top of that, the interest related to it, obviously, the interest charges can go up. And that could vary with regards to the terms of the credit card.

And that’s not really a plan to kind of pay it down. And that will restrict the amount of credit that you can get in the future. If your credit card balances are going up, you’re also restricting your cash flow in the event that you’re paying interest on the credit card, most likely at larger rates, if you continually pay off simply the minimum balance. Now note, oftentimes, it would be a good strategy in a perfect world, it would be nice if you can pay down the entire credit card balance at some point in time, because then you get that that use of the credit card for ease.

And you also get the small period of time of financing, possibly at no cost as you make the charges and then pay for the for the credit card service at the end of the month. And then basically extend that possibly you have a plan to have a larger balance outstanding on the credit card and are willing to pay off the interest on it, the cost of it, the rent of it in order to increase the credit, because sometimes actually having the liability out there could be good for your credit score.

So if you have an actual plan to do that, then that would be you know, an exception to the rule, if it’s some kind of, you know, within the big plan of increasing your credit or something like that, the total balance increases every month. So if you’re paying off the minimum balance, and you’re continuing to make payments, that will increase the balance, then of course, that’s going to be unsustainable at some point in time, that’s inevitably going to end up with a problem, because at some point, you’re no longer going to be able to pay off the minimum balances.

So clearly, what you’d like to be able to be doing is to be paying down their credit card balances and have some kind of plan to curb the standing either reduce the spending on it, and or increasing the payments that will be on it, missing loan payments or paying late. So this can be a more severe type of problem. Because if we don’t even pay off, say the minimum balance, or we miss the loan payments, either on a credit card or some other item, then we’re gonna we could have a problem with our credit later on.

So you want to make sure that we have good communications with our creditors in those events, to try to make sure that we’re negotiating whenever we can, and so that we can safeguard our relationship with them, as well as our relationship with our credit history and our credit score. So if we are in that situation, then we don’t want to like stop communication with the people, we’d like to basically increase communication with the people that were that we’re dealing with to try to take any steps we can at that point in time. So using savings to pay a necessities.

So if we’re dipping into our savings account, then of course, that’s going to be a problem because the savings account are in there for savings, especially if it’s a savings account that’s under the umbrella of a retirement plan, such as an IRA, or a 401k 403 b with the work or outside of the work. If we have to dip into those kinds of accounts, then we are possibly getting penalized on it because we’re taking money out of something that’s in our savings account.

So one, we don’t want to take it out of our savings account because that’s going to take out that’s going to reduce our overall budgeting strategy. If we’re taken out of our retirement account and we’re not you know, saving for retirement. And if we took the tax advantage of putting them into a retirement account, then if we take them out early, we can be penalised on and at that point, now if you need that money, then there possibly could be other options because you might be in a situation where you have to restructure things in order to do that.

Maybe you can find some kind of loan or something like that in order to against against, you know, a retirement plan or something like that. You might be able to use that to some degree to do what you have to do. But obviously that’s that’s a problem. That’s a warning sign that again, it’s not sustainable for a long period of time. You Problem warning signs continued getting second or third payment notices. So obviously, if you’re getting bills that are saying, Hey, you know what they look like they’re red, or pink. And they’re kind of like, Hey, you haven’t paid us for like a long time.

That’s why we sent you this bill, which is like bright red. This is supposed to indicate that there’s a problem emergency happening, that’s not good, because of, because of course, then you’re going to be paying penalties and interest on top of the bills, as well. And it’s just a growing problem. So borrowing money to pay off old debts. So clearly, if if you’re, if you have to do what you have to do, but I mean, it’s gonna be unsustainable, if you continually have to take out more loans in order to pay off prior debts, obviously, that’s going to be unsustainable, at some point, exceeding the credit limits on the credit cards. So the credit cards have the maximum amount of the credit limit.

And this could be an extension of just simply paying the minimum balances, and you’ll see those minimum balances increasing, as we have interest compiling up month to month. And as we make more charges over and above the amount of the minimum balance, that will typically increase, it could increase the amount of interest and so on, that would be charged, it’ll be unsustainable at some point. And one way that it’ll be unsustainable is it might hit the credit limit at some point, which again, that’s that could be a problem at that point. So denied credit due to a bad credit report.

So if you are, you know, trying to get credit somewhere and they say, hey, look, we looked at your credit report, and it’s not good, then, then that’s, you know, obviously, that’s going to be a problem as well. You want to you want to look into those problems as well. Now, obviously, once you if you see these warning signs, what can you do about it? Well, you can increase income, you could decrease the spending that’s going on, and you could try to refinance your debt situation to hopefully so that you can basically reduce the amount of expense you have with regards to the debt, meaning interest and penalties related to it.