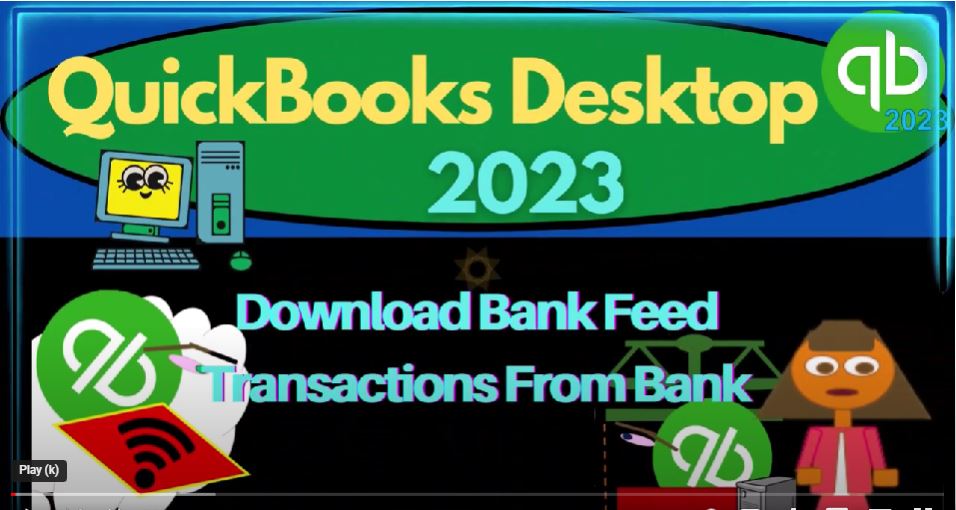 Last time, we talked about the different ways that we can get the information from the bank into our system, generally including two ways. One being the actual connection to the bank and downloading directly from the bank to QuickBooks to being downloading the data file from the bank.

And then importing that into the QuickBooks system. Either of those two methods, Once done, will basically put us in the same point where we’ve got the data in the system. And we can then use it to construct or verify the data in our accounting system.

And those are the ones that are going to be connecting to the bank feed. Note and remember that when you’re connecting directly to the bank, you want to make sure that it goes far enough back that you can get the data that you need.

So for example, the connection directly to the bank is usually the easiest thing to do. But sometimes there’s limitations in terms of how far back you can go for the data.

If you’re trying to construct an entire year or multiple years, for example, you want to make sure it goes far enough back to get the data you need. If it does not possibly, then you could go to the bank directly and try to download the file from the bank.

And then see if you can get more information or the information you need. That’s one reason why you might want to do the download from the bank rather than the direct connection. For the practice problem. It also works well for us here. So that’s what we will be doing.

Typically, you got your statements over here, which are usually going to give you your data in a big statement format, typically a PDF or a printout type of format. But that’s not formatted in such a way that you can upload to QuickBooks as easily as possible.

So usually, there’s some other way that you can download the transactions. So in this, for example, you’ve got the download account activity here. And then if this is an example of a web page of a bank, and then if you go into there, usually you’re going to have something like this,

for example, the range that you want the data, the range is going to be important, because for example, if you don’t have any, any data at all thus far, you can just start your QuickBooks when you started your company.

And that’s fine, you can just go forward from there. But if you have prior data in the system, then you want to make sure that you’re not duplicating data. So you want to set up the range to pick up the appropriate range.

And again, if you’re going way far back into the past, then there might be some restrictions in terms of how much data you can get how far back you can go. Now usually, you’re going to have some formats that you can download the data in the easiest format to upload to QuickBooks would be the QuickBooks format here.

Now, the other thing option this one has is the Quicken, don’t get those two mixed up. Quicken used to be owned by QuickBooks. But then I think it was purchased by somebody else.

It’s another program. So it’s not the same thing. So you’re not going to be able to easily upload a Quicken file to the QuickBooks make sure you got QuickBooks and not Quicken.

And then if you can’t get either of those, then you’ve got like this comma, comma delimited. And comma eliminated if you opened it up and like a Word document,

it’s again, it’s raw data that’s broken out by commas. But you could open it up in an Excel sheet, which is probably one of the more common ways to open it.

And it will look just like an A CDS file, you might hear it called, which is kind of like an Excel sheet without all the formatting involved in it. So this is another kind of raw data format, that many accounting software’s will allow you to upload into the system.

But QuickBooks Desktop for some reason is a little bit picky on that they want the actual QuickBooks file, not the comma eliminated. We might talk about that more in In the future, most banks do have a QuickBooks downloadable item, but some do not.

And so for example, something like a sometimes Pay Pal can be a problem, we might talk about Pay Pal later, where you where you can, you’ve got this comma eliminated situation, and then you’d have to convert it possibly into our QuickBooks type of file in order to upload it. So we might dive into that in a little bit more detail.

But the easiest file would be just a QuickBooks file, most financial institutions have that file available. Now just to see what the files would look like, if you were to download the file.

You can see it’s a dot QBO, which leads you to think that it’s like a, a data file. But but this is actually not the actual data file for your company file in QuickBooks Data from the Bank, which gets a little bit confusing. But anyway, so Oh, f x data QBO. And notice it says QBO, which you might think is an online thing.

And it is you can do the same thing for online. But it’s also the data file that you upload to you can upload to the desktop version, closing that out. Notice if I open up this file, you want to kind of get an idea of the raw data that’s going into QuickBooks, right.

So the raw data that’s going into QuickBooks is basically just like this, this isn’t the same data, but it’s just just like the bank statement, a mock bank statement has your increases and your decreases deposits and the checks.

But if you had electronic transactions, then again, those are the easiest ones typically to use, and the dates will be fairly relevant. And then you’ve got bank memo data over here, the bank memo data is useful,

So you got to make sure that you’re using the data that you have to create the vendors and customers. We’ll talk more about that when we get when we get back to uploading this.

But that’s the that’s the general theme. So now that we have this downloaded, next time, we will upload the data into the system.

So remember, the two ways that you can actually get the banking data in place, most of the time, you’re just going to set up and you’re going to connect directly to the bank.

But for a couple of different you might have multiple different reasons why you want to actually just download the data, possibly for the first time you’re entering the data to get more information or possibly in a practice situation. Maybe you don’t want to set up the bank feeds for whatever reason.

And then we’ll have to start manipulating that data so that it will create the financial statements and so that it will make future transactions future bank feeds, more automated each and each month we do this, the easier it should be because we should be able to automate more and more of the process. So we’ll talk more about that next time.