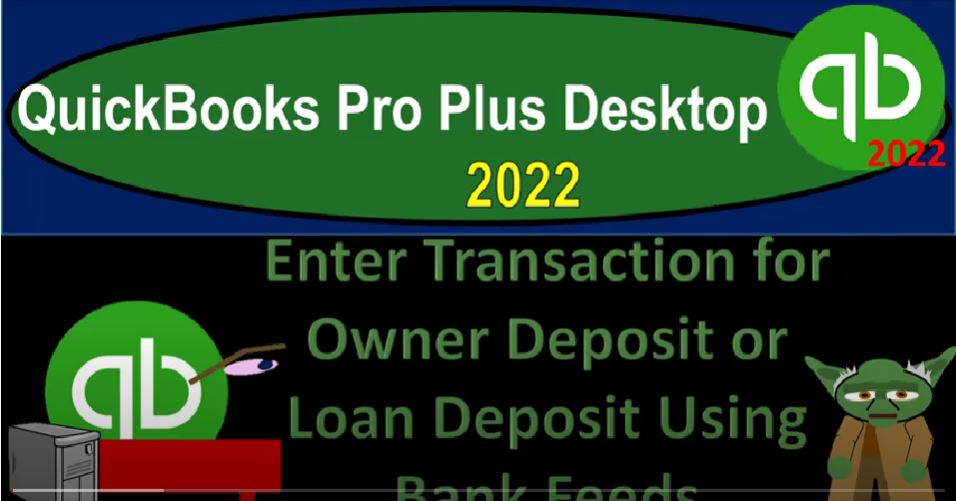 QuickBooks Pro Plus desktop 2020 to enter transaction for owner deposit or loan deposit using bank feeds Get ready because we bookkeeping pros are moving up the hilltop with QuickBooks Pro Plus desktop 2022. Here we are in our bank feed practice file going through the setup process with a view drop down the open windows list on the left hand side that company dropped down home page in the middle maximizing it to the gray area reports drop down company and financial taking a look at that balance sheet.

And we’re imagining the easiest kind of system that we could put together. If we have the type of business allowing us to do that like gig work where we’re getting paid from platform’s or something like that, we’re just going to wait till we get the deposits into our account and record them as revenue at that point in time. So the default strategy then would be every time I get a deposit, I’m just going to record it as revenue.

And so that’s going to be our default strategy. But what if we get deposits that are not revenue, the main two kinds of deposits of that kind being money that comes from the owner, and money comes from a loan. So let’s imagine those two types of instances, let’s go to the balance sheet.

So we saw that on the on the decrease side of things, money coming out of the checking account, the other side not being an expense, but rather being put here two draws similar kind of situation where you’ve got the money that’s coming into the business from the owner, if the owner is putting money in,

you want to increase the deposit on this side, but you want to be able to recognize that it’s not income, and rather put it to some kind of equity account of that being either owner’s equity or possibly making another account like a owner investment type of account similar to the draws. If you were to put it on the income statement, you have a similar kind of situation that like with if you put the draws on the income statement,

it will distort your income statement. In other words, if I go to the profit and loss, and I said, Okay, I got a deposit, and I accidentally just grouped it into income, possibly we were looking at a system in that case where we’re not as detailed with our income, possibly we’re just taking deposits and assuming they are income into one income accounts, then we would record it as income when it was really from the owner. And that would mean that our net income would be overstated.

Now, that could have some problems, because that means that you might even be paying taxes on income from the owners money, right? Because your income would be going up we have an income tax could result in you paying taxes on the income from the owner, it distorts the income statement, and it makes the company look maybe like better than it would so you want to make sure to pick those those out.

The other one is a loan, same kind of thing. If we go up to the balance sheet, and we said okay, we’re going to finance the company, either because it’s a startup company or we’re growing with a loan from the bank. You want to make sure that that’s going to go into the bank as a deposit most likely if you get an A cash loan, the other side again, you want to be able to pick up and say it’s not going into the the income statement as income but rather that would be a liability down here as a loan.

So that’s going to be the idea for Logistics standpoint, then if I go over to the bank feeds, the question is, how am I going to recognize these deposits as deposits from actual customers, I’m going to close the icon up top, and deposits from myself. Now, sometimes it’ll be pretty straightforward. If you’re, if most of your transactions are electronic transactions, then you’re typically going to have the information.

And if you’re tracking the information, oftentimes, it’ll say something in the like the memo or bank info, that will give you a reference to who the customer will be. But if you’re talking about other deposits, like you’re just Depositing cash into the system, then it’s going to be more difficult, you won’t have this added information. And it’ll be a little bit more difficult to pick that out.

So whatever your method is, you want to make sure that you’re able to distinguish a deposit that comes from you or a loan, and deposits that come from the bank. So that you can make sure that you can, you can record the deposits properly. For those instances where you have a loan, and you have the owner putting money in those instances not happening too often, usually, because they would only happen periodically.

So so we’re gonna go down here and just pick a deposit, and pretend it’s a loan. So I’m going to go down and say, we got this one, let’s pick up this one here. And say that this was the owner putting money in. Now, like I said, normally, if the owner put money in, you’ll probably be able to recognize it as an electronic transfer from one bank account to another. That’s one way of course, that you can kind of recognize it,

but you want to keep an eye out. So that you could you could see those and pick those up, especially in a system when they’re not going to be happening all the time, they’re going to be more rare transactions, typically. So we’ll deposit this in, we’re going to say the payee would be like the owner. So I’ll just say owner.

And then I’m going to say that the account is not going to go to income, this is the big major takeaway here, it’s instead going to go to an equity account, which you could put into the equity here, owner’s equity or possibly make another account, I’ll make another account to make it very transparent, hitting the drop down, we want this to be an equity type of account. And I’m going to call it owner, owner owner invest meant owner investment, that’s what we’ll call it. That’s what we’ll call it.

And then we’re gonna say, Okay, that’s good. And then if I add more detail, hit in the drop down, you could see the detail of it. And we see that the date and so on the account the memo, and then down below, we could create a rule for it. But this one doesn’t have as much to a rule that we can create with it. If we were putting money in from our like a transfer, then you might have a good amount of detail a good amount of data to create a rule with it, we’re not going to do so here,

I’m just going to save it and close it. And that will move it into the added transaction. There it is, let’s open up the carrot and see what happened here by going to then our balance sheet. If I go up top to the checking account and double click on the checking account, we should have the deposit that was put in place, I think we have the deposit down here, see up top here 922. So there’s the there’s the deposit, if I double click on it, it’s using that deposit form.

So this is the actual form that is going to be used to input that closing that back out the other side is also on let’s close this back out. The other side is also on the balance sheet. And it’s going to be in the loan amount. I mean, I’m sorry, it’s in the equity down here. So we created another equity account for the owner investment, double clicking on that there is our transaction there as well closing it back out, there’s no impact on the profit and loss or income statement here.

And that’s going to be you know, the point it was not included in income. Let’s do the same thing in imagine we have a loan, we have a similar kind of thing, we’d go back to the bank feeds. And let’s imagine go back to our uncategorised stuff. And say that we had a loan, let’s imagine this one was a loan, this deposit. And so we’re going to say this is from the bank, bank.

And this would not be a transaction that would be really reoccurring as well. So you might not have any kind of memorizing the transaction there because you’re not going to be taking out loans all the time, it would be something that would happen just periodically, most likely. So let’s go ahead and just add it then adding that adds it over here. There is our loan. Let’s go back up to the to the balance sheet.

And then if I go into the cash and double click on the cash, which is actually positive now that’s nice. That’s a good Do on 922 I think that was it right there. Closing that back out the other side went into a liability account for the loan payable loan payable. There it is, right there closing it back out.

And there’s no impact then on the profit and loss, and that’s going to be the point. So if you build it, the point is if you’re building your transactions, your financial statements from the bank feeds, and you’re just assuming that all deposits are going to be cash, you could do that. But just make sure that you have the safeguard in place that those deposits which don’t happen all the time, and therefore they can, they can, because they don’t happen all the time.

Be a little bit difficult to set up. If you’re not ready to set them up those deposits that aren’t revenue, you want to make sure that you can weed those those out and not be including them in revenue, which could distort your financial statements, but rather be putting them to the appropriate balance sheet account, which if it was from the owner would be some kind of equity account, if it was from a loan would be some kind of liability account.