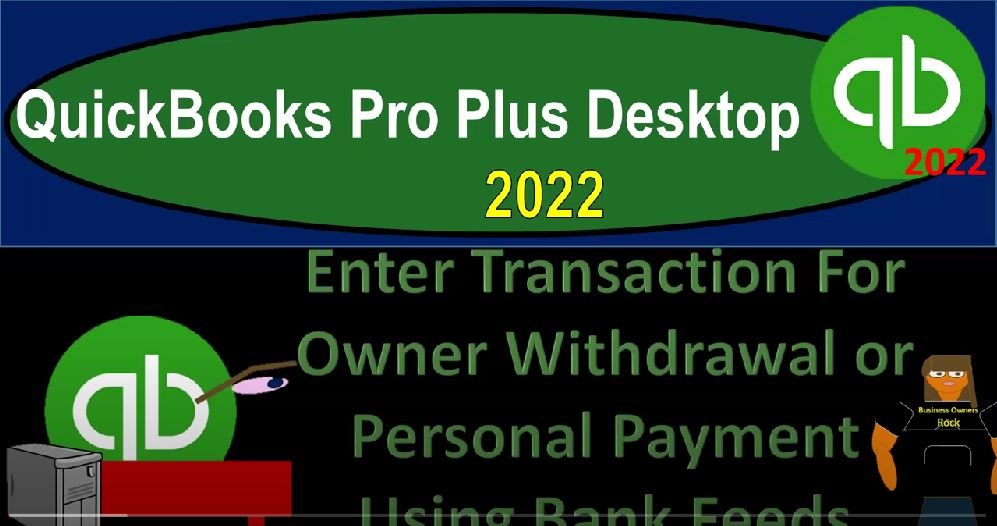 QuickBooks Pro Plus desktop 2020 to enter transaction for owner withdrawal or personal payment using bank feeds Get ready because we bookkeeping pros are moving up the hilltop with QuickBooks Pro Plus desktop 2022. We are in our big fee practice file going through the setup process with the view drop down the open windows list on the left hand side then the company dropped down the home page in the middle maximising the home page to the gray area.

Reports drop down, go into the company and financial then on down to that balance sheet standard. We’re going to customize that report up top and change the range from a one a one to one to 1231 to one, then go to the fonts and numbers changing the font size, bring it on up to 14, then we’ll say okay, yes, please.

Trial Balance range change from a 101 to one to 1231 to one, customizing that report with the fonts and numbers changing the font, bringing it up to 14. Okay, yes, please. And okay, now opening up the bank feeds by going to the banking drop down bank feeds, bank feeds Center, which you only have if they’re turned on, going to maximize this item. We’re looking for the unrecognized over here.

So we’re unrecognized transactions. So before we record anything, let’s go back to the balance sheet and run our scenario. So if we go to the balance sheet, we’re looking for those items that are going to be like draws. Now, this is going to be something you want to consider for your personal side of things. And possibly, you might want to consider if you’re doing bookkeeping, basically, for somebody else, how can you set up the draws as easily as possible?

And therefore you can easily see that the other side or the it’s a business related activity will then result in a business related expense. If it’s a personal thing, you want to come out of your personal account, so that you don’t mingle those things together. Because it’s easiest to determine whether or not you’re meeting your goals.

And the goals of the two things are different from the business and the personal side of things if you can separate those two things out. But some people are not as good at doing that. So some people might have some commingling going on are quite a bit commingling going on stuff that’s business and personal that’s coming out of one checking account.

Well, you could still do the same thing. Let’s let’s say that they basically spent some money on a restaurant, and it wasn’t for business, but it was for personal use. And now you see the money coming out of the checking account. When you record it on our side, we could say okay, the other side isn’t going to go to meals and entertainment or restaurant expense.

It’s just we’re just going to record it to draws and in that way we can still kind of recorded it would be like recording the same kind of transaction as if they the owner had taken the money out in the form of money coming out and then spent it on the restaurant expenses.

So we can’t do that it’s not the end of the world. If you’ve got that kind of commingling going on, you’re trying to get your books to be set up in a business like fashion. But it’s a little bit more difficult, because then you got to go in there and dig out the personal versus the business.

So if you’re a small sole proprietorship, or something like that, it’s possible that you have one account in one QuickBooks file, and you Use class tracking to separate these things out. And that will separate things out on the income statement, so that you can apply a class for the personal versus the business usage. And if you want to try doing that, you can go to the Edit, drop down preferences, and you can turn on the class tracking, which is in the accounting information up top and the company preferences.

And then you have the class tracking, which is right here. And that adds a little level of complexity in the data input. But it’s a way that you can you can kind of break out your personal and business.

And that way we have a whole course on that if you want to get involved in the class tracking, it’s a really good thing to learn about the class tracking can be can be used for different purposes as well, multiple different ways depending on what you’re doing with the bookkeeping, but we’re not going to do that here. We’re going to close that back out. And so let’s go back to our bank feeds.

That’s a straightforward transfer, or if there was a draw like an ATM draw. And we assume that anytime we take money out, that’s just cash, it’s for personal use. Otherwise, we’d have to have receipts or something like that. So if I can, if I can make the assumption that if I just draw money out that it’s for personal use, or if I transfer money to an account, that’s That’s a savings account, a personal account, then of course, that would be a draws.

And I can record those as draws. That’s the most straightforward way we can do it. And so we’ll record this here. And we can we can just call this as the owner, for example, that’s taking the money out owner, or W and er, and then I’m going to say set it up. And let’s just it’s going to be other because it’s not really an employee, customer or vendor, because it’s the owner that’s taken out, I’m going to say okay, and then the account is going to be some kind of equity account.

And generally QuickBooks will set you up with a draws account, if you set up as a sole proprietorship. So that’s gonna be a draw, it’s not going to go to an income account, the other account that you would expect it to go to would be like an expense accounts. And if you hit an expense account, it’s going to distort your income statement, because you have an expense that’s going to decrease net income, which should not be there. So we want to record it to the draws, and then the payment.

And then I can say, if I wanted to add more details, we can make this a rule. And if this was a reoccurring transfer, for example, if I had a business where I basically had a set amount that I took out of the business on a month by month basis or something like that, then the rule could be set up quite easily.

I’m not going to set up a rule here however, because it’s just going to be our practice problem, I’m going to save it to the register. And then if I go to the added to register, we see our transaction here, opening up the carrot that we closed in the past go into the balance sheet, then if I double click on the checking account, now we see this decrease for the draws which is right here, the 75 draws closing that back out and the other side is going to the equity account right here.

It’s a con it’s a contra equity account bringing the equity balance down, and it’s going here it’s not hitting in other words the income statement the profit and loss on this side. And that’s the key. That’s the most straightforward way now if you have other stuff like okay, now they we spent money on restaurants, we went to Disneyland or something like that, and we spent using the same thing checking account.

a separate class and try to do class tracking, which again, it’s a little bit more complicated. So we’re just going to record it as a draw. And so I’m going to say, All right, it’s a draw. And this is going to be prime America. And the account, the account, then is not going to be business insurance, or business meals and entertainment, or any other expense account, it’s just gonna go directly to the draws, which is an equity account, which we’re just going to call owner draws.

So let’s go ahead and add that I’m just going to add it this time. And then if I open up the caret on the left hand side, and we go to the balance sheet, if I double click on the checking account, we can see that transactions decreasing, of course, the checking account, and then closing this back out, the other side is going to the draws account.

depending on your perspective, for tax purposes, it could actually lower taxes, but it’s wrong. So if you get audited, then it could then they could get mad at you for doing things like that. Many people have stuff in there that they’ve included meals and entertainment, they’ve trips to Disneyland and Florida or something, you know, in there because they just hadn’t hadn’t weeded it out.

And they haven’t separated their account. So if you get off, you know, obviously, if you get automated or something like that, then you’ve got this huge amount in meals and entertainment, for example, that is not business related, then you know, that can of course cause a problem there.

And if it’s on the personal side, if you’re using the financial statements to try to get a loan or to get more investments or for an equity investment to try to get a partner or some kind of capital investment, then of course you want to look good. And so you don’t want to have expenses on the books that that are actually personal expenses. You want to record them typically at what they are as the draws