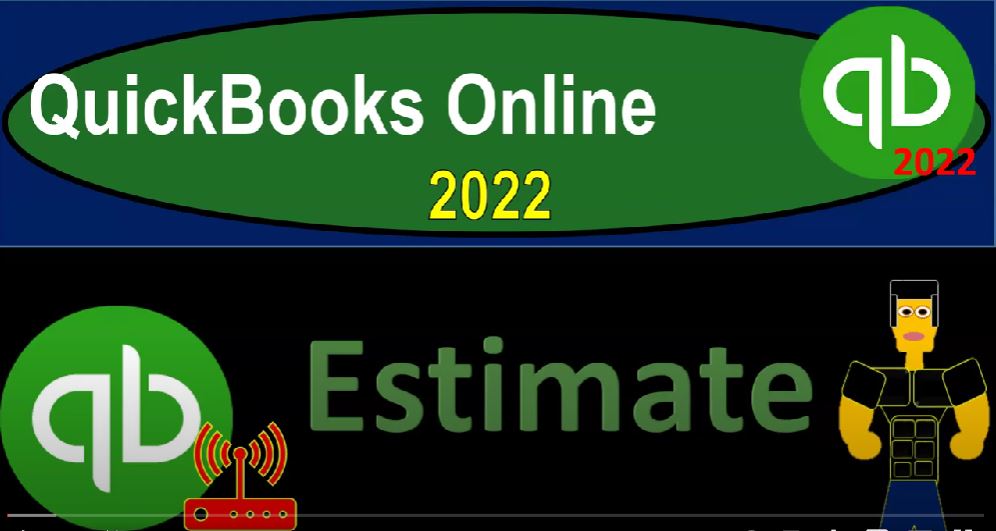 We’ll also have the online 30 day free trial version open, you might not have access to this, but we’ll just use it to look at that business view as opposed to the accounting view. We’ll look at it more in the second half of the course, going back to Craig’s design, and landscaping hit the drop down up top last time, we looked at the delayed charge, which we said could be used in a similar way as an estimate.

Now we’re going to be looking at the estimate. Now normally, when you think of an estimate, you’re usually thinking about a longer term job cost type of system, where you might have a system where an estimate has to be put in place upfront, possibly even bidding for a particular job, or estimating how much that job will cost. And then you’re going to be possibly using that estimate in order to populate the invoice. But you can also just think of the estimate as a shorter term type of thing as well.

For example, if you’re going to be having a sale that’s happening in the future, and someone calls in and wants to basically estimate what the price will be and possibly come in at a future time to make the purchase, then you don’t really want to do it in an invoice perhaps because you don’t want to actually record the invoice, you might want to put it into an estimate and say,

Okay, this is what it looks like, I’m going to put together these items lining up these items, I can apply out the sales tax at that point in time and see what the estimate will be I can save the estimate so that when you come in at a later point in time, we can use that estimate as a building point to then create the invoice from.

So let’s go into the estimate. If we go into the estimates, another report that is not going to actually have a transaction recorded on the financial statement, it’s going to be an internal report no impact on the financial statements, we’re trying to make an estimate about some kind of sale that’s going to be happening into the future. So let’s be creating our customer one again, customer. That’s not a customer, customer number one, we’re going to add that customer.

So I’m going to say add the customer. Notice here we have the status of the estimate. So if we go into that we have it pending, accepted, closed or rejected. These are kind of like the default statuses, I’m not going to get too much into the job cost system. But generally, if it’s going to be pending, basically, if you were to have a job, it hasn’t yet been accepted, then if they accept the estimate, then you’d say okay, it’s accepted. And then once the job is complete, you would close the job. If the job is rejected, then the estimate is not something that’s going to be used going forward, and you can mark it off, then as rejected.

Now you could have a fairly simple estimate, but you might have like a more complex estimate as well. So if you’re trying to figure out how much something would cost, and you’re putting together different line items on it, that’s when of course the invoice and the billing gets a little bit more complex.

And you could have quite extensive estimates and invoices. And that’s when it would be nice to be able to put the estimate together, of course, so we might have multiple items here, let’s be picking up a couple items. So we’ll just say concrete, we’re gonna say that’s going to be 50. And then I’ll add another item here, and we’re going to say, let’s say ours. And then let’s say we’ve got this as 100.

So you get you can get a quite complex type of estimate that would be put in place here. And then when you record this, it’s not actually going to record something. It looks like an invoice. It looks like there would be an impact on the financial statements, but no, because this is just an estimate, but we can use the estimate and in order to populate an invoice in the future. So if I save and close this, I’ll say save it and close it. We’re going to say that’s where we’re at right now to the customer. We could send that out you agree with that or not?

Should we move forward from now? At point in time, I’m going to duplicate the tab up top, right click on the tab up top, and duplicate this tab. Also note that we do have a course on like a job cost system. So we’re not going to get into a lot of detail on the job cost system, just really into the workings of what the estimate can do kind of in general. So then we’re going to go down to the reports.

And let’s just look at that trial balance. Again, let’s look at the trial balance. And we’re going to be in the current year, so 2020, to close in the hamburger holding CTRL down, no impact on the financial statements from that transactions, nothing’s in the income accounts. You can see down here, even though we’ve recorded the estimate, because it’s just an estimate, going back to the first tab, if we then go to the sales area into the Customer Center, and we go into the customers closing the hamburger up top, we can then go down to that customer number one again, if we go into customer number one, we have no balance in it.

So if they rejected it, for example, and they and they came back and said, Okay, we’re not going to do business with you, or whatever we don’t like we got an estimate from someone else that we’re going to accept that we think is better than you can say, we’re going to reject that item. And now you can see in the detail that the estimate was made, but it was rejected. So you know, you got you have more flexibility, of course with the estimate in this way, then if you created, for example, the delayed charge,

which is something that you would expect, if it was a delayed charge, it’s something that’s more definite that you’re basically going to pull over at some future point to the next billing cycle. That’s why I would typically think that delayed charge would be used for something that if you have a standard cycle of billing, that you’re going to be adding, you know, the delay charge to the standard cycle of billing, that’s pretty, pretty solid in nature, the estimate, you could have some more flexibility with and say, hey, look, I’m putting the estimate together, we’ll have it in the system, you can, you can save it or reject it at some future point.

And if you reject it, we’ll just mark it off as rejected. And we’ll see that it was there. And that it has been adjusted, we could then create another estimate, of course at that point in time, and then adjust the estimate. And we can see kind of the changes that we have made along the way to those estimates. So I’m going to update the status.

And I’m going to bring it back to let’s say let’s say it’s an accepted estimate, and say Okay, so now once again can create an invoice from the estimate at this point in time, you can also create the invoice by going up top and just adding an invoice. So we’re going to say let’s make another invoice here.

And we’re going to say this is going to be for customer one, customer one. And this invoice will then pull in this item on the right hand side said hey, there’s an estimate, I’m paraphrasing, hey, there’s an estimate out there that you have created, do you want to make this invoice from the estimate? And we could say yes, add that information, add in the information in. And then I’m going to make this on the second just to make it a different date. And so now we have basically the same kind of form. But now we pulled in the estimate to the invoice.

Obviously, if we make the invoice now we’ll have the transaction be recorded at this point in time. So I can then say save it, save it and close. My voice is going again, don’t go voice, I need you voice plays. I’ll be nice. So then if we go down, you’re Oh my god. Okay. So if we go down, we got the sales item down here.

So the estimate can be a great tool to to basically kind of work out what the invoice is going to be beforehand, whether you’re in a job cost system, or in any kind of situation where somebody is basically saying, you know, you have a complex set of things that you’re going to be purchasing even in what we’re going to do later selling guitars or something like that, or renting something, you can say, Okay, we’ll put together the estimate, we’ll put together all the stuff on it instead of doing it in an invoice and we’ll save that estimate. And we can use it then to populate the invoice.

And if you reject the estimate, and you don’t want to make the purchase, that’s fine. We have a track record of what we put together for you. And I can go back into my sales data and we can we can then see, you know, the requests that have been made and the estimates that have been put together in the past. So it’s a really nice tracking tool. But remember that the estimates are being tracked in like the sales area. They’re not actually being used to populate the financial statemen