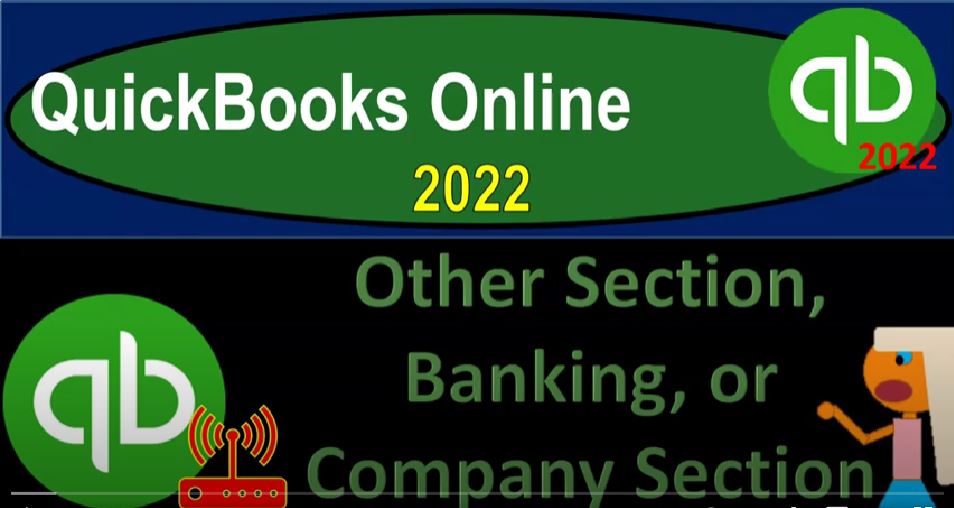 QuickBooks Online 2022 other section banking or company section, get ready because it’s go time with QuickBooks Online 2022. In our browser searching for QuickBooks Online test drive going into the Test Drive file, we’re going to be choosing the United States version and verifying that we’re not a robot. sample company Craig’s design and landscaping services holding CTRL down scrolling up just a bit to that one to 5%. We also have the 30 day free trial version open, you might not have access to this at this point. But we might jump over here just to look at that business layout as opposed to the accounting layout. Going back to the sample file, we’re going to be hitting the drop down button up top. In prior presentations,

we took a look at the cycles, including the customer cycle, the vendor cycle, we’ll look at the employee e cycle in the future. But first, we’re going to jump over to the other area, meaning there’s no cycle related to this item. But it’s still in this drop down because there’s still items in here that are going to be used often enough that they’re kind of thought of as normal data input forms. In other words, remember that these forms over here basically represent data input forms that we’re going to be using.

Often this drop down, then is the drop down that we’re usually going to be thinking of or one place we can go to find the normal kind of data input forms that are typically used to create the financial statements. So let’s take a look at the items in the other area, which didn’t really fall into a particular cycle. The first one is that deposit. Now we looked, we looked at the deposits earlier because we would hope the deposits are going to be pretty much connect to the customers area, if mainly meaning at the end of the day,

we’re hoping most of our deposits come from the customers however, they put the deposits over here and the other area possibly for a couple different reasons. One, we could have deposits that aren’t from customers, like we put money in as the owner, for example, or we had loans.

And two, they may be trying to emphasize that the deposit form is not the form that we want to use typically to record revenue, although we could. But it’s not the best form because there’s QuickBooks would like you to use either the invoice form or the Sales Receipt form to record revenue or income, the invoice form being done when you record revenue. And you’re billing the client for work that has been done that you’re going to get cash in the future and accrual method form, the sales receipt being used,

And you may well do this, especially if you’re in a type of business, where you’re going to get your money from like like gig work like a platform like Amazon, or from teaching revenue or something like that, where you just want to put it directly into revenue when you get the deposit. And and you might do that with bank feeds as well. So we’ll talk about this when we get to the bank feeds section.

And you could just use the deposit form to go directly into revenue. However, doing that does lose a bit of detail because you’ll lose a bit of detail with regards to the subsidiary reports which are typically broken out by customer and or by item that you’re selling the goods and services that you’re selling. So that’s the deposit form, then we have the transfer form, the transfer form is typically going to be used when you’re making a transfer usually from one checking account to another.

So it might be set up similar to a bank account. And again, you could have transfers that are going in and out of that account, possibly going facilitating the sales and then going transferring hopefully into the checking account after that point in time. Now note that transfer is a little bit strange of an account because if you think about it,

Because I could use kind of either one, it might be more clear in that instance to use a transfer form to indicate that this is going from one account to the other. Whereas if you’re using a cheque it kind of gives an indication as if you’re paying somewhere outside the company, or an expense form. And if you’re using a deposit that kind of gives an indication that you’re getting something from outside the company, the transfer gives you that added level that hey, this is going internal transaction here that we’re talking about. So then we have the journal entry.

This is the the form that you’re going to use if there’s no other data input form to enter into the system. And notice, if you have an accounting background, you might have learned how to enter everything with basically journal entries, which is actually a really good tool, because then that helps you to set up the invoices, set up the items, set up the bills, and whatnot, and know what the impact of these forms will be on the financial statements.

One, you want to set up the data input forms, so that you can hand off the job to somebody else. So they can do the data input form and not need to know what the journal entries are and to because the forms are set up to have some internal controls within them that are quite useful, like connecting the invoice to the receive payment.

So you can see the outstanding items that are on there connecting the estimate to the invoice connecting the sales receipt to the deposit connecting the bill to the expense form, these are going to be important kind of things that are helping the accounting process. So the general rule is, if you have a transaction you need to put into the system. See if there’s a form that you can use to do that first,

because that’s how QuickBooks is designed to facilitate normal transactions. If there’s not a form, then I would ask is cash affected? If it is, you could typically use an expense form a check form or the check register or a deposit. If cash is not impacted, then you might want to use the journal entry. And the journal entry will often be used for those year end or in period in month end or year end adjustments adjusting journal entries. So when we get to adjusting journal entries, we’ll talk about them.

And also you might have some transactions that don’t fall into any of those categories. Like if you purchase the equipment and you finance the entire thing. purchasing equipment doesn’t happen every day, because it’s large pieces of equipment. And if you finance it, cash isn’t affected, you could enter a bill. But that won’t quite work. Because interest accounts payable, what you want is a loan to be increased.

But you still need to do a physical count because there might be stolen islands, lost items spoilage, and when the physical count doesn’t match what’s in the system, then you need to do an adjustment. This will help you enter that transaction, then there’s a pay down the credit card. And that’s basically another transaction that you could use, you would think with an expense form or cheque form.

But if you want to make it specific that you’re paying down the credit card, it gives you another kind of little indication in the ledger, that it’s a pay down credit card form and that can give you a little bit more detail. So we’ll go into some of these forms in future presentations in more detail.