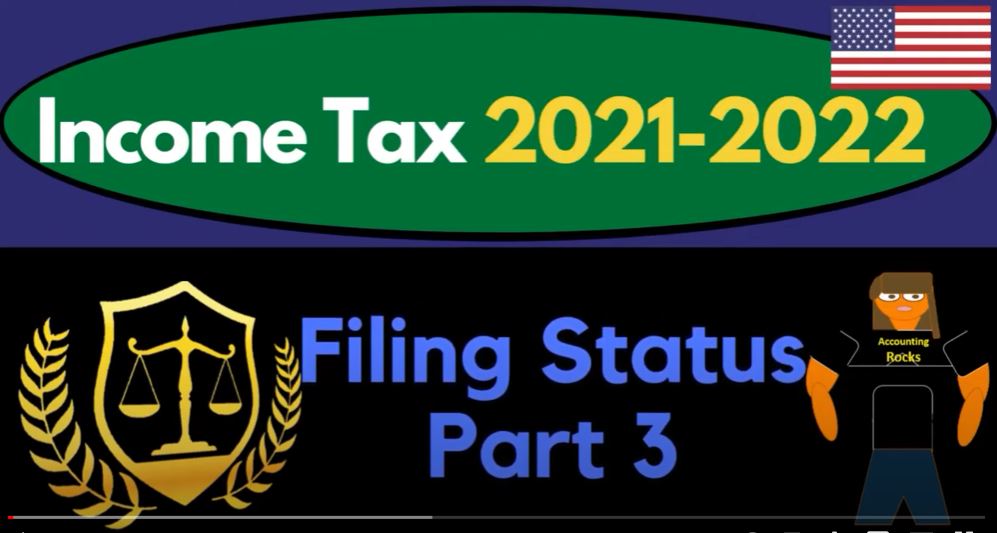 As we think about the differences in the filing status, we want to know what the impact will be on the taxes. Easiest way to do that to visualize it is using the tax equation or tax formula.

The major impacts will be on the standard deduction as we change filing statuses, and on the tax tables, the progressive tax rates that will be applied. There’s also other areas that will be impacted, like phase outs and so on, could be impacted as well.

But these are the major areas that you could basically envision as you’re thinking about changes to the filing status, and what’s going to be the impact on the actual tax return. Remember that the filing statuses are on the first page of the 1040.

So we have single, married filing jointly married filing separate MF s head of household, often abbreviated H O H and qualifying widow with a word Q w, you want to be able to basically understand the rules in general have a general idea of them,

and then be able to research those areas where there’s more complexity in them. Typically, the filing statuses are going to be fairly straightforward. But we can see those areas that are gray areas that can actually be somewhat complex when we’re trying to decide which filing status will apply.

And you’ll also want to be considering what the general rules will be in terms of the impact on the taxes and then dig into the more detail actually applying out the different filing statuses and look at the different impacts on the taxes, putting them into tax software and looking at the changes when you want to drill down into the detail, then you could first start up at the IRS website IRS dot govt form 1040 instructions.

Remember that as we entered the filing status sees the standard deductions, one of the major things that will be impacted. And you’ve got this little item on the left hand side of the actual tax form,

given you the different status standard deductions based on the filing statuses, which there are other changes that could be there based on age and whether or not someone is blind, for example.

But this will give you the general idea of the impact, there’s also going to be an impact as we talked about in the past to the actual brackets that will be calculated in terms of the different filing statuses.

So different progressive tax brackets for single filers, married filing jointly, married filing separately, head of household, so the filing statuses include then we’ve got single,

we took a look at the single filing status the head of household the married filing joint married filing separate now we’re looking at the qualified widow widow winner, which seems kind of self explanatory. But there actually are a few questions related to it in terms of when would it apply? And what are the benefits for it, for example.

So the general rule is that in the year of death, if you had a spouse that was married, a year of death happens in that year, you would typically still be filing married filing joint,

because you could possibly, for example, have two incomes from the two married individuals. And you would think married filing joint would be what you would need to file to pick up pick all that up and so on.

Then after that year, for two years after that, the question is would you then go to the to the qualifying widow widower, or would you revert back to say single after that point in time, and typically there’ll be a dependent requirement that will be qualifying to get a qualified widow widow worse status, which generally will have favorable tax rates, if applicable.

Okay, so you can check the qualified widow widow where box at the top of form 1040 or 1040 SSR, and use joint return tax rates for 2021 If all the following apply. So remember, we’re talking all the following

You can imagine it because of course when we went to sync from single to married, you got two incomes so you got more beneficial tax rates if you go back to in essence single or one income stream, then to have the married rates would be beneficial. Notice that we’re talking about all conditions here instead of just like any condition.

And then the following two years 2022 2023 would be the ones you’re going to question as to whether you’d be qualified widow widow, or single at that point, and you didn’t remarry before the end of 2021.

So generally, you’re talking about a child dependent here, except that even if they’re not a dependent, and these conditions apply, then you may still be able to qualify for qualified widow widow where this is kinda like the gray area, the child had gross income of 4300 or more.

So that’s one of the dependent requirements, or could be that the income was under this threshold. If that’s the only reason you couldn’t claim them as a dependent, then you might still be able to qualify for qualified widow or widower, even though they’re not a dependent, the child filed a joint return.

So if you yourself could be claimed as a dependent. So if the child isn’t claimed as your dependent, enter the child’s name in the in the entry space below the filing status checkbox.

So in the event that you file for qualified widow widower, and usually you’ll have a dependent so that that requirement will be on the first page have a tax return. But if it’s not, then you’re going to want to add that information.

They’re saying put that information in place. In those rare circumstances where you have this other this other person qualifying you, otherwise, it could cause you know delays in the tax return. So if you don’t enter that name, it will take us longer to process the return three, this child lived in your home for all of 2021 if the child didn’t live with you for the required time, you could see exceptions to time lived with you.

We’ll talk about that later. But the general rule they lived with you for you paid over half the cost of keeping your home. So you paid over the half the cost five, you could have filed a joint return with your spouse the year he or she died, even if you didn’t actually do so.

you can’t file as qualifying widow widow where instead see the instruction for married filing joint. So again, if they died in this tax year 2021 Then you’re not talking about qualified widow with a work your spot you’re most likely still going to be married at that point in time for taxes. So adopted child and adopted child is always treated as your own child and adopted child includes a child lawfully placed with you for legal adoption dependent to find out if someone is your dependency who qualifies as a dependent later we’ll talk about that later.

Temporary absences by you or the child for special circumstances. So this is what the time exception to time lived with you so they got to live with you for the full year. But there are these exceptions of course. So such as circumstances like school vacation, business, medical care, military service, or detention in juvenile facility,

count as time lived in the home also kidnapped children later under who qualifies as your dependent if applicable, a child is considered to have lived with you for all of 2021 if the child was born or died in 2021, and your home was the child’s home for the entire time he or she was alive.

The child is considered to have lived with you for all of 2021 if your main home was the child’s main home for the entire time, since he or she was adopted or placed with you in 2021. Keeping up a home what does it mean for keeping up on home to find out what is included in the cost of keeping up a home you can see publication 501.

Because it’s a fairly vague kind of wording there although you can see when it would generally apply but if if it’s going to be a gray area, you could take a look at publication 501 which you can find on the IRS website IRS dot govt irs.gov