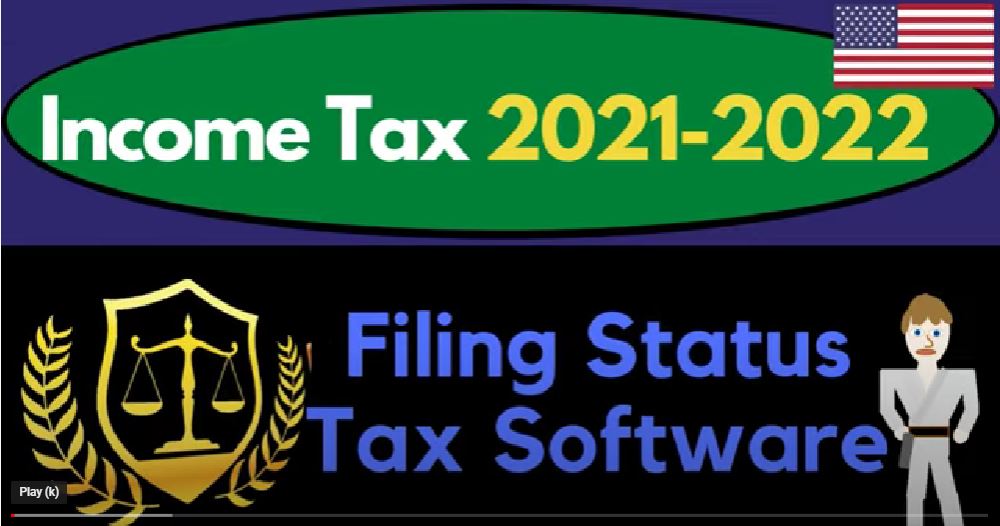 Income Tax 2021 2022 filing status tax software, get ready to get refunds to the max diving in to income tax 2021 2022. Here we are in our Lacerte tax software, it’s okay if you don’t have access to the cert tax software or any tax audits where you might want to look up the PDF files of the actual forms,

which you could find on the IRS website irs.gov. IRS. gov in that case, the tax software helping us to do the data input Jumping over to the forms a little bit more quickly. So we’re looking at the filing statuses which are up top here you can see on the form 1040, single, married filing jointly married filing separately,

Head of Household qualified widow widow, we’re gonna start off with the single filing status with our mock client here, Adam Smith, the tax payer living in Beverly Hills 90210, we’re going to say that they have 100,000 of income as our baseline.

which you can see on the left hand side, you kind of want to memorize these or have an idea of them, they will change from year to year with in inflation and so on 12,005 50 doubled when married 25,100. And then in the middle head of household 18 800 could also be infected affected by age as well as if someone’s blind or not.

So there’s the 12,005 50 pulling in for the standard deduction, you also want to think about that as the baseline as as to whether someone might be able to itemize or not, because they would need to be clear in that as we’ll talk later. And so that’s going to give us our taxable income 87 450, which we can check and like a worksheet, say income is going to go in let’s say this is w two income pulls over to line one,

we were not going to include anything for the adjustments to income at this point standard deduction being taken, pulling from our information down below bringing us to the taxable income 87 450, then we’re going to rely on the tax software to calculate the actual tax. So that’s going to be in accordance with the progressive tax system 1515 over here, so I’m going to put that in here when 5015, then the average tax is 17.2%.

And I won’t get into the payments down below. That’s where we’ll stop it here. So we could see that some of the impacts that would be involved with the standard with the standard deduction for the different filing statuses here, if I go to the tax summary, we can then see that we have the average rate 17 And the marginal rate at the 24. That’s those tables are going to be based in part on the status as well.

Same up top, you might say well, if they get married, it’s possible they get you know, more income, because you got two people that are possibly making income these days. And that’s why the standard deduction goes up, but maybe not at the same time. So we’re gonna keep it at the baseline of the 100,000.

which is now at the 25 100, which is pulled in from the table over here. If I was to mirror that on our worksheet, I’m just gonna say right that incomes the same standard deduction is now

at the 25 100 they would need itemized deductions greater that than that in order to benefit from the itemized deductions. And so then the taxable income 74 974 900 here that looks good, page two, calculating the tax 1005 93. Now, so this is going to be 8593.

Now this 8000 593 is a lot lower for multiple reasons. One is is that the standard deduction changed it so the taxable income is lower and two, because you got the tax brackets, which are going to be different as well for the married filing joint status.

but if you have other credits involve like an earned income tax credit. For example, child tax credits, sometimes those things can make it a disincentive still, to get married oftentimes in the lower income level of things because of those refundable things. But in any case, we’ll talk possibly more about that later.

but you could, you know, check that out. And sometimes it’s under some circumstances, that could be more beneficial. And some people just like to file married filing separate for just to manage the two things separately.

Now, we’re going to keep the same 100,000 Just for our baseline, we’re back down to the 12,550 for the standard deduction, which is pulled over from our table over here, which we can mirror in our formula, bringing this down, again, to the 12,005 50 number.

Remember, even though this this port is the same filing, filing, married, filing separate is not the same thing as filing single and you could have significant differences in terms of our Do you have access to refundable credits, like the Child Tax Credit, earned income tax credit, and so on and so forth.

So you might look at this and say, Well, look, they took it, they just took us back to as if we’re single. But remember, it’s not exactly the same thing as single when you when you file married filing separately. So just be aware of that.

We’re just looking at the standard deductions here, however, then let’s say they go back to single, possibly they separate get divorced, or we’re never married or something like that, then we’re going to go back to a single but maybe there’s a dependent. So the dependent would then qualify for the head of household. So we’d go back on over and say,

Okay, well, what if we’re back to single here, we’re going to say what if we’re single, but now we got to dependent, we’ll go to head of household, which would mean that we would need to add a dependent.

So now we’ve added a dependent and we’re at Head of Household now. So we’ve got bit living in Beverly Hills, 9021. And Sam Smith is the dependent. So now they’re single with a dependent, therefore a head of household is is what we could go up moving up from just the single status.

For the head of household tables, do I have them there they are head of household brackets, even though they’re going to get them from the tax table charts. But those are the tears for the progressive tax system 12 166. So now I’m at 12 166.

And so that’s a 15 average percent tax bracket, right? 15 average, if I go back to my tax summary worksheet, 15 is the effective average marginal rate highest rate at the 22%. So there we have that, let’s bring it back. Let’s bring it back to married now.

And then think about a situation where you have people that are older than then this age limit 65 I believe and or blind, which could have an impact as well. So I’m going to go back on over to the first one. And let’s go, let’s say dependent.

Let’s say let’s say let’s take the dependents off. We’re going to go back to married filing joint. So there we have it. So now we’re at the 100,000 the 25 one on the standard deduction based on this over here. So we’re going to stare at 25 125 one.

So now let’s say that that one of them is is older than the 65. So note, when you do that, then it might jump over to a 1040 s are at that point, or I think it’s still easier to look at the form 1040 to 1040. s are on page four, they’ve got these adjustments for the calculations in essence of the standard deduction.

now add the 8431. So now we’re at 8431. So we have that, we could have two of them that that are over that the age limit. So if I go back on over with Americans, you can see it gets fairly complex, you can say,

Okay, what if I had two of them over the limit. So now again, you can take a look, it’s going to take you to the form 1040 S, our page for you can look at married filing jointly, now your two of these conditions have met 27 800. If I jump back to the 1040, then I’m going to say okay,

so there’s the 27 800 in my normal kind of layout, which is different than anything in the standard deductions, because you got the two people that qualify for that added amount, I can base I can do that in my worksheet here. I could say okay, now I’m going to say this is going to be equal to this, plus two of these conditions are met this times two, that’s how it gets to the 27 827.

Well, what if the other condition is bet would be someone, one of them is blind, or both of them, right? We could go into here and say blind. Now if I go back to the forum forums and say, Okay, let’s go to the 1040.

And then of course, you could file married, you could file then, after two years after the death, the qualified widow with a worst status. So if we did that, lastly, and that would mean there was a death, not in 2021.

But possibly prior to that, you’d also need a dependent generally for that to be met. So then qualified widow widow were and so then then you generally would have a dependent let’s we got the 100,000. And now you’re at the 25,100

Even though you’re not married, but you’re basically picking up that married rate here. So we’d be back over here. I took I took away the age condition and the blind condition.

So those are going to be the some of the standard kind of conditions. I went through that fairly quickly. But just to give an idea of these different conditions and some of the major impacts that will be on the tax return, you know,

including the tables and the standard. There’s also a bunch of other factors that could be include influence, including phase outs of deductions, credits will talk more about those kinds of things in the future