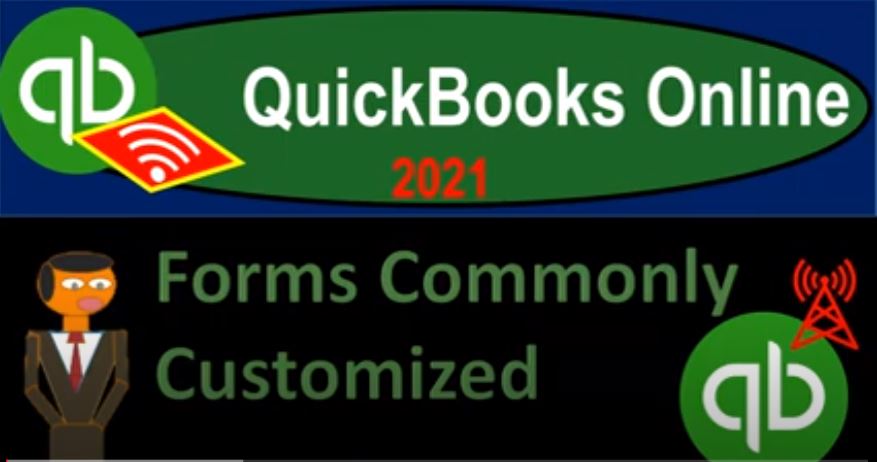 QuickBooks Online 2021 forms commonly customized, let’s get into it with Intuit QuickBooks Online 2021. Here we are in our practice file we set up in a prior presentation, we’re going to be thinking about the customization of certain forms. When thinking about customization of forms, we’re typically wanting to customize the forms that are going to be provided in some way, shape or form to people outside of the company typically being customers.

So one way to go to the Customize area is to go to the cog up top, and then go to the custom form styles into the custom form styles. Then we have the drop down in the upper right hand side, where we have the invoice estimate and the sales receipt. Now obviously, if you do not customize the forms, you could use the forms right out of what we would call the box, I guess, you know, right after downloading the QuickBooks system, and those would just be the standard type of forms.

But if you want to give a better special look to your forms, then you can use these customizations of the forms, which can be a nice touch as you then interact with your customers, because typically, you’ll be using these forms when interacting with the customers. So let’s just think about where these forms kind of lie in terms of the cycle, the accounting cycle, so we can see which ones we’re going to be customizing and why. So to do that, I’m going to go over to the desktop version, you don’t need the desktop version to follow along.

But I just want to show the flowchart, which is on the desktop version. So the flowchart is a nice tool to have. And we’re just thinking about the customizing of the forms and why we would want to because they give this nice pictorial format of the forms that will be generated. And there’ll be basically the same in QuickBooks Online. And we could think about which ones are going to be customizable. So normally up here in the vendor cycle, if you think about the standard process in the vendor cycle, we have the Enter bills type of form, that means it’s not the bill that we’re sending out, because when we send out the bill to the customer, we call that an invoice.

We’re talking here about the bills that are coming into us. And we don’t typically customize the bill forms because that’s kind of like an internal form, meaning we got a bill from somebody else like an invoice to somebody else with a bill to us, and we just entered it into our system, so that we can sort the bill, and then and then pay it. So there’s no real customization need here typically, because we’re not usually providing something to an external user.

Over here, we have the pay bill, which is basically a check, which is similar to just basically a check or an expense type of form, which again, normally is kind of like an internal form, we’re decreasing the checking account. With that form, we may have checks that we’re providing to other people. But typically, if we’re going to customize the checks, then we’re gonna have to customize them on the bank side of things. Even if we print the checks in internally, like through QuickBooks, we still get the customized checks that are pre printed basically from the bank.

So we don’t really customize the pay bills or the cheque or the expense type of form, typically, because once again, those being internal forums, if you didn’t go down to the customer cycle, that’s when you’re usually thinking, Okay, these might be customizable. The primary form that we would think about customizing is the invoice so the invoice is going to be the form, if you’re in the type of business where you basically did work, but you haven’t got paid on it yet. So many types of businesses are going to be set up in this way, depending on the industry that you are in.

So for example, if you’re a lawyer, or you’re an accountant, or something like that landscaper or something, you’re probably going to be doing the work first, you’re gonna have to count the hours, you’re gonna have to decide what it is you actually did come up with the invoice to build the client, and then you build a client with an invoice. So notice we call it an invoice down here for QuickBooks, if the person receiving it, we’ll call it a bill. So those two terms are kind of interchangeable, they’re just directionality type of terms within QuickBooks, they need to distinguish between the two in some way shape or form.

And that’s the kind of a decision that was made bill is the one we received the invoices us sending a bill to somebody else to build them. Now obviously, we’re sending this to somebody else, therefore it’s going to be received by a customer. And we want to make it look nice then. And we’re also asking for money at this point, because we did work and we want to get paid. So so you want to make it look nice here. And so that’s the one that we’re going to be primarily customizing. So once you send out the invoice that increases the accounts receivable, the other side goes to sale, then we expect to be paid on it in some way shape or form.

When we’re paid by the customer, we then typically use this form called a receive payment. Now normally the receive payment form is simply an internal document which is going to decrease the accounts receivable showing the fact that we received the payment. And then the other side is going to go to undeposited funds or cash and therefore once again, kind of like an internal form for the most part here. So typically, we don’t think about this form as being something that would be customizable. Although in the desktop version,

I believe it’s a new kind of thing where it is customized Hear I don’t think it’s customizable yet online. But and that’s kind of nice because you can kind of give a thank you letter, you can give one other touch to your to your customers, you can invoice them. And once they pay you, it’d be kind of nice if you had a form here that you can customize, saying like, thank you, you know, or something like that. But in any case, we don’t we normally think about this as an internal form, we will typically be focusing in on it being customized.

Now the other form that will commonly touch a client would be the sales receipt. Now the sales receipt is different from the invoice and you would typically customize this because once again, it might be provided to the client, typically in a situation where the work was done at the same point in time that that you got paid. So if you’d like a bookkeeper or a lawyer or something like that, or say you’re doing tax preparation, they and they actually come into the office and you’re sitting in the office, and you basically do the work with them at that point.

And then you build them at that point in time, which you can call invoicing them right or create, you know, charge them, then you if you have a cash register or think about it as a situation where you have to go make a cash register in front of you, you would be thinking about kind of creating a sales receipt. And you know, and then you can think about that as kind of like a cash register, that would generate a sales receipt, which would be recording the transaction that took place. Now obviously, this one may not need to be nice, quite as fancy.

Because unlike the invoice here, at this point, you’ve already got the payment, whereas the invoice, you want to make it look real nice saying would you pay me please, for the work we did, we’d kind of like to be paid, but they create sales receipts is happening at the same point of time. So it’s assuming that you’re already got paid. But again, it’s a it’s a form that you would think that you’re going to be given to the client, and therefore, you want it to look nice.

And then of course, we have the deposit form over here, which is basically at once again, an internal form, which is going to take the payments that we have already received, put them into the bank, therefore, it’s not really something that’s for external use, and therefore you don’t really need customization typically, on the deposit form. Also note that it could be nice to format some of these forms, because you might want to call them something other than, say an invoice or a sales receipt.

So for example, if you’re not for profit organization or something like that, and you’re using QuickBooks for that kind of system, then you might want to call something like thanks for the donation form or something like that, as opposed to a sales receipt form, you’re going to use terminology that’s going to be indicating that not for profit, you don’t want to be using for profit terminology in that in those cases, the other form that you would commonly be thinking about customizing with would be the estimates form which would only be applicable if you’re an industry that has estimates, typically one where you’re going to have a longer term type of job.

So if you’re like a law firm or CPA firm, where you’re taking on, say, an audit, or a long legal case, or something like that, you might create an estimate first, or of course, classically, the example would be a contractor where you’re taking on a longer portion of the job and you’re saying this is what I believe it will cost, I’m going to put together the estimate. And the estimate once again is going to be going to the client in an attempt oftentimes possibly to bid for a job against other individuals.

So you want the estimate not only to look attractive, but the form to look attractive because the look and feel of the actual form does have an impact on people at some level or another for the decision making process. Therefore, the estimate is another one that you want to make customizable, and make it look nice. And so those are the those are the three that we would typically think of estimates or invoice probably number one, and then maybe estimates number two depending on the on the industry and then the Create sales receipts because they’re going to be going to the customers