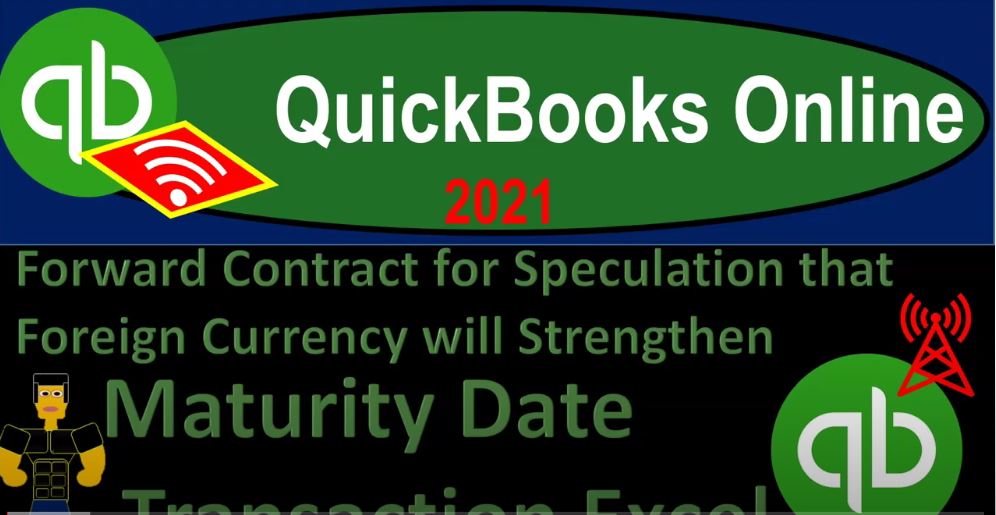 Let’s go ahead and open up our financial statements to start off with going to the tab up top to do so right clicking on it, duplicating it, then we’re going to go to that tab once again or the second tab, duplicate it by right clicking on it and duplicating it will then go to the reports on the left hand side, take a look at the P and L the profit and loss will look at the last years we’re looking at the last year and running that report, closing the hamburger hold down in control, scroll up just a bit to get that one to 5%.

Then we’re going to go to the tab to the left, go down to the reports, we want to open up the BS balance sheet report this time during the date range change up top for the last year last fiscal year. So we want the last year and run that report close up then the hamburger. So in prior presentations, we put on the books the foreign exchange contract, and then we made an adjustment for the end of the period. So now we’re going to say it’s in year two, now we’re in year two, and the forward contract will then become due when it becomes due, we’re going to be receiving the 100,000 foreign currency units, which we currently have reflected after 6261.

Two, we need to basically adjust this to to the actual amount that we will then be receiving. And then down here we have what we’re going to pay this is in current US or in US dollars. Based on the forward rate that we put on the books when we put the contract on the books, there’s nothing funny with this one, we can keep that on as is. Let’s jump on over to Excel. And let’s first do this in Excel. here then is where we stood as of the end of year one, here’s our year one numbers, let’s move on to tier two, which I’m going to represent down here in the trial balance down below. So we just basically pulled over the year one numbers.

So in other words, these numbers are coming from the year one numbers up top, those are Indian balance, those are now our beginning balance. And then the equity section down here adds up to the 103 100,300. That ties out down here to the 100,300. So we basically have a post closing trial balance, or our beginning trial balance. And now we can take a look at year two. So in year two, now we’re going to say that this thing has become due. So if I look at our scenario to the left hand side, we said all right, we had a foreign exchange contract, we’re betting that the Canadian dollar is going to do better as time passes.

So we put this on the books having a receivable represented what we’re going to get in foreign currency, and then the payable in US dollars. And then we’re hoping that the foreign currency gets stronger, because the receivable is the one that will then vary, it did do so then at the end of the year. And so we’re saying yes, this was good. This was a good, like play for us for our speculation. But now it’s become do so now we’re actually at the endpoint. So now it’s 331. And it’s become due at this point.

So now we have to pay off the payable, which is a straightforward transaction, because it’s just going to simply be in US dollars, and we got it we’re going to receive then the foreign currency units do 100,000 units in Australian dollars, which we have to deal with that exchange kind of issue at this point in time. So if we go back up top, then we got we’ve got to revalue then our receivable, that’s where kind of the problem will be, we have this receivable on the books at this point at the 61. Two, we got to revalue it to what it should be at this point in time. So how would we do that? A couple of ways we can think about it, we can say okay, well, we’re going to be getting 100,000 foreign currency units times.

Now, we’ve been using this forward rate the whole time here. But we’re not going to be using the notice there is no forward rate in our practice problem here as of 330 1x, to the expiration of the foreign contract, because the it’s not a speculation anymore, it is what it is. It is now the spot rate. We know what it is because now it’s today today is today. And we know what the rate is on the day, because that’s what’s called the spot rate. That’s the current exchange rate.

So now we’re going to use the spot rate. So we’re going to take this times the spot rate, which in our practice problem is point 602. So there we got the 60,200. What is currently on the books then is the 61 two, so minus the 61 two, that means we have $1,000 and this is actually a loss. So now the contract does not look as good anymore. So the other way we can kind of figure that the other way.

We’ll figure that which one Do nx sales, we could say, okay, what’s the new rate, which is point 602 minus what it was at the last point, which was this, our forward rate point 612. That’s what we use to value it as of 1231, the end of the year minus the point 612 times the 100,000. So there’s the 1000. So now we got it, we got to take this thing down, now the receivable needs to go down. So I’m going to basically credit the receivable or basically, that’s exactly what I’m going to do. It’s not basically, and then the debits going to be for a loss. Now now we’ve got a loss.

And I’m going to do that calculation again equals brackets, I’m going to take the larger of the two numbers we’re dealing with, which was the 1231, forward rate, minus the spot rate at this point in time into the contract times brackets, and then times the amount of the 100,000. So there’s our $1,000. And then if we make our adjustment over here, we’re going to say, all right, so that means we got a loss down here, of 1000. And then the receivable is going down by that 1000. Now we’re at the 60,200, which once again, is the amount of Australian dollars, we’re going to get 100,000 times the current spot rate, because we’re not using the forward rate, because we’re now now is now so there is no forward rate, because we’re in the present, so 60,200.

So there we have that. So now we could just complete this transaction. So basically, now we have a payable to the broker in essence in dollars as a 60,900. And we have a receivable from the broker that we’re going to get in foreign currency of, you know, the 100,000 units, which is an equivalent at this point using the current spot rate 60,200. So the dollar, let’s do the payable first, this one didn’t change, it’s the 60,900 60,900 for the payable. That’s what it was, when we first put it on the books, it hasn’t changed the whole time. It’s been up here because it’s in dollars.

So we’re just going to take that off the books by saying, All right, we’re going to debit that. And then we’re going to credit cash, because we’re just simply going to pay that with cash with US dollars, nothing fancy happening here, the calculation, I’ll just calculate it again. So we can see where we got it. It’s the 100,000 times the forward rate, when we first set up, the contract hasn’t changed since then. And there we have it. So now we’re just gonna pay that off.

And then I’m gonna, this one’s going to go down, I’m going to double click on this, go to the end of it and say plus, pick up that 60,200. And there we have it. So at the end of the day, we’ve got the cash now we’ve got the 60,200 in foreign currency units, which is really representing 100,000 Australian dollars foreign currency units. retained earnings is from the prior period, that rolled in was started at 100,000 in the 300. That was increased from a gain in the prior period. But now we have this $1,000 loss. So on the income statement, the key here is that we had to revalue it last time, so we should be recording actually again in the prior period.

And then in this period, we actually had to record a loss. So if you look at the total between the two, then of course we had a loss. Overall the full thing was not a good transaction of 700 but we need to break Get out in accordance with the time periods where it stood as at the end of last year, we had a gain of 300. And then this year, we were going to allocate the loss. So it kind of flipped back back and forth. And this allocation of the gain and loss across the cutoff period to put the proper amount of gain or loss in the proper period can of course be one of the confusing factors.

So next time, we’ll take this same concept, and we’ll do this within QuickBooks and you could just kind of imagine some of the issues you’ve got within QuickBooks, we’re gonna have to basically revalue the receivable accounts, we’re going to possibly have to set up a foreign currency bank account that will be holding basically the Australian dollars.

And then there’s a question as to whether we want to do like a reversing entry kind of process. Would that make it easier for the accounting department or just simply do a journal entry in a similar fashion as we did here? So those are some questions that we will address as we jump over to doing this in QuickBooks in the following presentation.