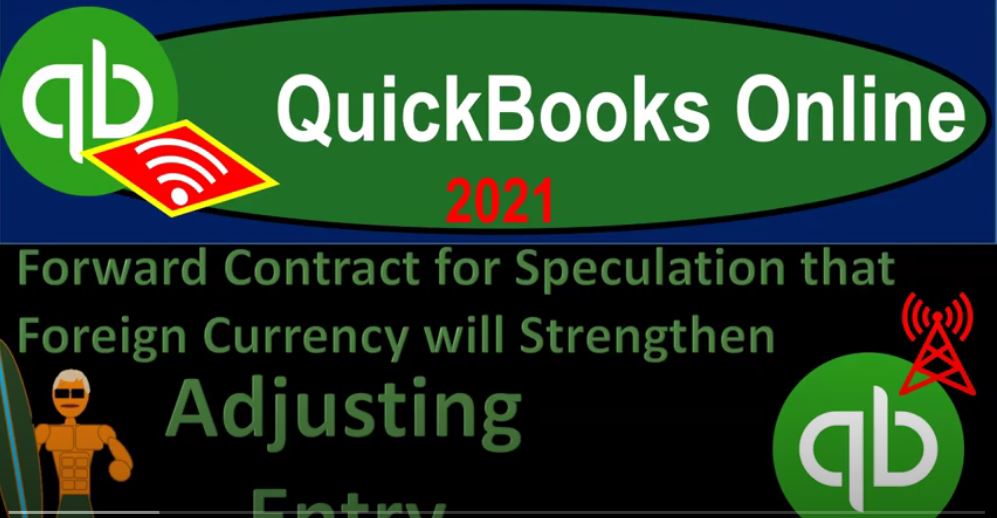 QuickBooks Online 2021 no forward contract for speculation that foreign currency will strengthen adjusting entry. Let’s get into it within two it’s QuickBooks Online 2021. Here we are in our QuickBooks Online not problem to multiple currencies a forward contract practice file and prior presentations, we set up a 30 day free trial and then turned on the multiple currencies, which once turned on can’t be turned back off. Now we’re going to be opening up our financial statements to continue from here to do so we’ll go to the tab up top, right click on it to duplicate it, and then duplicate the duplicated tab by right clicking on the duplicated tab to duplicate it.

I’m going to say last year for this one and run that close up the hamburger last time then we put on the books the forward exchange contract speculating that the Australian dollar would become stronger with relation to the US dollar therefore discussing with the foreign with the broker exchange broker saying hey look, we would like to receive foreign currency units in the future saying 100,000 foreign currency Australian dollars in the future. And we will pay you in the US equivalents given the current rate.

So we put them on the books, the receivable here that we’re going to be getting in foreign currency units, Australian dollars in the future valued at the current rate, not the spot rate, not the current exchange rate when we put it on the books here when we negotiated this transaction, but rather on the forward exchange rate, because that’s what the broker is going to allow us to put it on for which is a little bit different than if we were to do other normal type of transactions, such as purchases and sales for foreign currency units.

And then down here, we’ve got the payable that we put on the books for the same amount except for this amount we’re going to pay in the future in US dollars in the current negotiated exchange rate, that we put it on the books for which was that speculative type of rate. So now if we go back on over to Excel, the next thing we want to do is say okay, now it’s the end of the year, we’re going to pretend it’s the end of the year now. And we haven’t yet it’s not the due date, meaning we put this on the books at 12 1x. One, it’s going to become due on 330 1x.

Two, so but before that we’re going to have the financial statements as of the end of the year. And we want to do our our revaluation as of the end of the year to make our financial statements correct as of that point in time, so we need to reflect then this receivable using the proper amount for our financial reporting at that point in time. Now, there’s payable isn’t a problem, because it’s in US dollars. And that’s our measurement tool. So we need to adjust this receivable. So that’s going to be our plan. Let’s pull up the trusty calculator to do this.

and that’ll give us the 61. Two, if I subtract that minus the 6900, we have a difference or a change of $300. Now, if we think about this, we’re gonna say okay, you know, is that good or bad? Well, we could see this is point 609. That means for one Australian dollar before the forward rate would be speculated that they would get 1.609 US dollars. And now we’re speculating that one Australian dollars would get point six one to more US dollars or more of a fraction of a US dollar, therefore, the foreign currency got stronger. And so for us, that’s good, because we have a receivable and we’re going to get paid in foreign currency unit.

So at this point in time, it looks like our speculation is paying off is good, it was a good speculation. So we’ll do this, we’re going to save in this foreign currency receivable is going to be going up, we’re gonna have this, this gain here, which we’re going to call foreign currency gain. And then I’m going to do this calculation again. I’m going to do it a slightly different way, this time. I’m going to Take the current rate minus the prior rate, multiplied times the 100,000. Same kind of result, just different algebra. So we’re gonna say this is going to be equal to the point 1612 minus the point 609, brackets times the 100,000, that’s going to give us our $300.

So there’s going to be our 300, debit and credit. If I was to record this out and say a journal entry, I’m going to double click on this transaction, say plus, there’s the debit, increasing the 61, two, and then the gain is going to go down here, we’re going to put the gain in the in this year, in the year one, even though the contract is still on the books. So there we have it. So now we’re going to have to do that in QuickBooks. So let’s go ahead and do that in QuickBooks.

Now, because in QuickBooks, we set this receivable up not as a accounts receivable. In other words, if I go back on over to QuickBooks, this receivable that we’re going to get in foreign currencies in the future, we didn’t set up as an accounts receivable. So we’re not we’re not, we don’t have to deal with the same kind of possibly like an invoice or customer kind of issue related to it, we got to do it with just with a straight journal entry. So what we’re going to do in QuickBooks will mirror pretty much exactly what we did in Excel. So let’s go back to the first tab and simply just do a journal entry for it,

I’m going to hit the old drop down, we’re gonna say, let’s do a good old journal entry. As of the end of the year meanness, hold down Control, scroll down just a bit. And now I’m going to keep this one in US dollars, because I’m just going to do a straight kind of journal entry. And I in the exchange rate would not be helping me within QuickBooks to do that. In other words, if I was trying to use QuickBooks to help me out with a spot rate, I might, for example, you know, change it to the foreign currency. And then and then use the their, their calculation to determine what the what the rate should be.

I gain loss receivable broker exchange, gain loss. Now this is an account, they haven’t set up for us yet. Because sometimes when I when I do an automatic transaction, QuickBooks will basically add this account. But I’m going to add it here, I’m going to say that it’s going to be an expense, let’s make it an other expense. Therefore, it’ll be basically at the bottom of the financial statements, we’re going to then say that this is going to be an exchange gain or loss.

And therefore, I’m going to have it one account will flip between whether it is a gain or loss. In other words, gains and losses will net out in this account. So I’m going to save it and close it. And that looks good. Let’s save that. If it does what we would expect back on over to the QuickBooks, let’s run it, hold down Control, scroll up just a bit. So now we’re at the 62,000 61,200 by go back then to excel, does that match out what we have here, 61,200 looks good. And then the other side is going to go to the income statement go into the tab to the right.

Scrolling down, let’s go ahead and run this one. And so there we now have this $300 we put it at the bottom. So it’s not, you know, a part of normal operations. This is our exchange, gain and loss at the 300 down below, so that looks correct. Let’s go ahead and then look at our trial balance going up top and we’ll go to the hamburger reports. Open up the trusty trial balance, we can just check this stuff off as we go. Balancing trial trial balance, and then we’ll hit the date range we want to see last year last year and run it so There we have it.

At the point in time, we’re going to get paid or at least at this point in time, it’ll change in the future. And then we’ve got the retained earnings 100,300 gain. So we’ve got the 100,300 games, everything looks good. we’ll print out the trial balances as we go. So you can use those as a reference if you’re following along