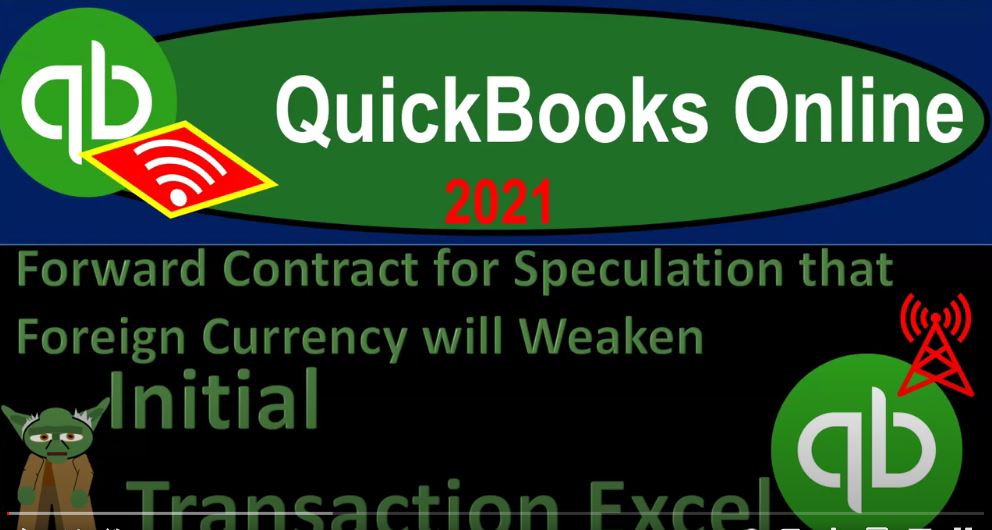 So it is good practice to practice with a practice file before turning it on in your own file or possibly before setting up your QuickBooks file that you will be using moving forward, we then turned it on by going to the cog up top and you can go to the account and settings. And then you want to go to the Advanced Settings, then turning on the currencies, our currency is going to be the US dollar as the home currency. Now we’re going to be thinking about the initial transaction that we’re going to be putting in place for a forward exchange contract. We’ll do that first with Excel because it’ll be more transparent to look at in Excel, and then consider what it would look like if we were then doing that same kind of activity over here in QuickBooks.

So if we go back on over to Excel, we’re thinking about this being our situation, we’re going to say we have a forward exchange contract that we’re going to put putting in place on 10 1x. One, we want to have a 180 days speculation forward contract, that we’re gonna have to make an adjustment for it at the end of the year, because there’s going to be an adjusting entry, and then it will be coming due for 180 days, from the point time that we put it on on the books, which is 10 1x.

One, which will be four 1x. Two, that being in then the following year, why would we do this, we’re basically making a speculation that in the future, there’s going to be a difference or change between the relative currencies, our currency and the foreign currency. In this case, we’re looking at the Mexican peso, and we’re assuming that the Mexican peso will weaken. So this is kind of a mirror opposite of what we did last time, we might do this specifically for speculation purposes.

So obviously over time, what we would expect to happen and what we’re hoping that happens is this amount right here which represents 5000 pesos, pesos that we will be paying in the future. This amount right here will actually weaken or go down over time so that when we pay off the payable will be less than the receivable the receivable will remain fixed. Because it’s going to be received in US dollars, the payable is representing foreign currency units 5000 pesos in this case currently valued at 3700. If the pesos weakened in value, and we paid in 180 days, something that was worth less than what we put it on the books for at this point in time, which was a 3700,

But just to get an idea of where it will be in the cog drop down, we go into currencies, we can set up the peso there, or we can set it up as we basically enter the transaction, we can oftentimes enter it at that point as well. When we go down to the accounting tab down below, we got to have a receivable and a payable for the exchange broker transactions. couple ways we could do that if I hit the New button up top, we could do that with a receivable account here, but then we got to track it in the sub ledger for the receivable. So normally, when you use an accounts receivable account, we would put the receivable on the books as well as basically like an invoice.

And then the payable would have to be on the books, that’s kind of like a bill. And we could set it up in that way and basically do two separate transactions invoice and a bill. And that could help us with the calculation of, of the exchange currency. So we might, you know, defer it up and check that out. What we did last time is we set it up with an other current asset and other current payable.

And you can then change the currency and or not change the currency down here and then track it. And when you do this kind of system, you’re using QuickBooks in a similar fashion as with the Excel worksheet over here with do things straight with straight up with a journal entry, for the most part. So that’s going to be what we’ll work on setting up next time.