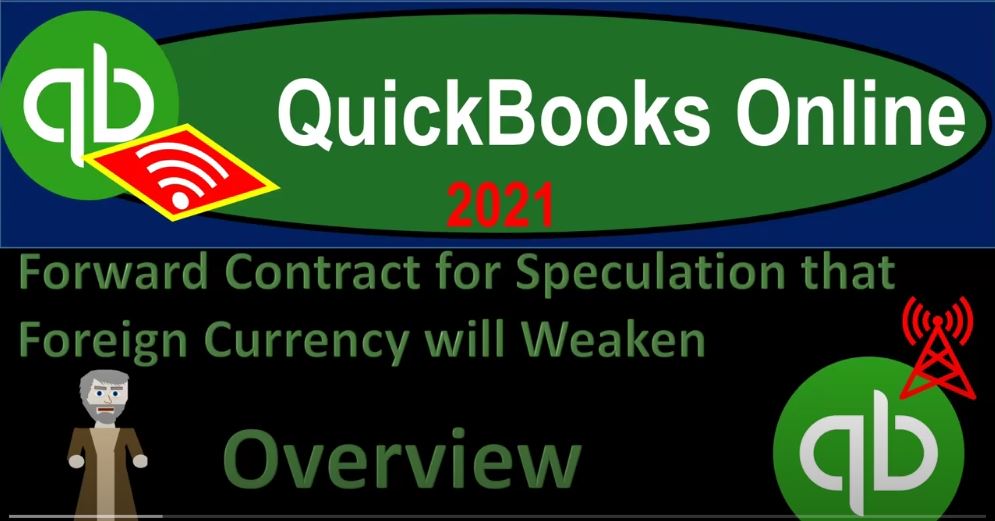 So I would recommend, if possible, possibly setting up the free 30 day trial to set up and test the practice problem or the multiple currencies and then add them to your current file or possibly look for a discount that you can get from a CPA or accountant or QuickBooks professional to purchase QuickBooks at that point, and then set up the multiple currencies. So I’m going to hit the cog drop down over here, we’re going to then go into the accounting and settings, this is going to be an advanced items.

Just reference that the home currency is whatever currency you are and the other currency has, has got to be in relation to the home currency. And this is the currency we’re going to be measuring. In other words, our financial statements in then we’re going to turn on the multiple currencies, we get the warning here. So it says the multi currency may be right for you, if you have financial transactions in more than one currency need help deciding about the multi currency, you can check out this link to see more help there. Once you turn on multiple multiple currencies, you can’t turn it off, you can’t change your home currency.

So once you set this home currency, in other words, in our case, US dollars, you can’t change that, typically, you wouldn’t want to, but make sure you got the right home currency or else that could cause you a problem. So extra fields, columns and more are added to QuickBooks that means that when we set up different types of transactions, and this is one of the reasons why you might want not want to have it on meaning that he got the right currency, and you got multiple, multiple currencies on probably won’t bother you too much for the most part, except for these exceptions, but you got this added field in there, you’re gonna have to be dealing with where QuickBooks is always trying to manage between the different currencies.

And then we have some features may no longer be available with the multiple currencies. So I understand. And I cannot undo the multi currency, we’re going to say yes, we understand. And we’re going to go forward anyways. So there it is. And then I’m going to hit I’m gonna hit done at the bottom, because we’re done with it multiple currencies now on so we can test it, we can check it out by going to the cog up top, go into the lists. And then let’s take a look at our currencies here, it should give us our list of our currencies, they give us by default, the Canadian and the Euro by default,

because they’re I guess, they’re assuming that we’re going to if it’s a US dollar doing, doing transactions with our neighbor over here, and so on, so but if you have some other currency you want to add and you can go up top, of course, and add all these other currencies whole lot of a whole lot of information that we can add, if you want to remove the currency, you can hit the drop down here and delete the currency that has been put in place by the default. Now if we go down to the chart of accounts down below in the accounting area, and we set up our chart of accounts, just remember the accounts that you’re really kind of focusing in on if I hit the drop down, and say new chart of accounts.

And just just to review them, we’re not going to add an account here, but obviously the bank account one account, because we might be holding foreign currencies that we want to make sure that we were being aware of with regards to multiple currencies, then the accounts receivable account, this one’s a little bit different than the desktop version, in that we’re not going to label it as a foreign currency. But when we create the vent the customer that’s what’s going to drive the account as far as a foreign currency type of thing and help us out with the transactions and then the accounts payable, similar kind of thing.

We’re not labor labeling it as foreign currency. But when we set up the vendor that’s going to help us to set this up. So let’s close this out. Let’s then go down to our Excel worksheet. So now we’re going to be considering our Excel worksheet. This is going to be our practice problem. We’re thinking about a foreign exchange contract. We’re thinking about it for speculation purposes here. But also note that once you have the concept down, you could use it to mitigate risk for normal type of transactions as well.

So if I have some normal transaction that results in an accounts receivable or accounts payable that I’m either going to be receiving or paying in foreign currency, then I’m exposed then to the risk of the currency values changing over Over time, I could mitigate that risk with something like a forward contract, the accounting of it may differ slightly. If it’s just a forward contract for speculation versus kind of like a hedge or something like that, for more detail on that information, you can take a look at our advanced financial accounting course. But this will be the general kind of concept with it, and how we can enter it into QuickBooks.

But well, we have a market that is speculating what the exchange rate will be. And that’s what we’re going to have to use. And that’s what’s going to be a little bit different, we’ll have to grab that forward rate, probably not from QuickBooks or not from QuickBooks, but in some other location, then we can put the receivable and the payable on the books using that forward rate.

And that’s what we’ll put it on the books for. And then the receivable in this case will be in dollars. So we expect them to receive $3,700 from the broker in the future. The payable then is going to be on the books in pesos. So we’re going to pay in the future in foreign currency for 3700, which is the equivalent of 5000 pesos. So we’re going to pay 5000 pesos which is the equivalent of $3,700. As of the point in time, we put it on the books not using the spot rate, however, but the forward exchange rate, that means that we’re going to be paying in pesos.

So this is basically betting that the there’s a weakening in the peso as compared to the US dollar. And so now note, we’re doing this at this point, just as a speculative a speculative bet. But also realize that you could see a situation where you could use this as as like a hedge or a mitigation of risk, meaning for example, if you did normal kind of transactions with Mexican company and say you have a receivable on the books, due to us selling goods, for example, and having a receivable on the books that we expect to be paid in foreign currency, the receivable would be exposing us to risk.

One way we can mitigate the risk is then do some kind of foreign exchange contract to basically net out the difference between the receivable and the payable. We might look at that a little bit more in a future future problem, but you could see what the concept would be here. So the difference, of course, would be when we put the receivable on the books, we would use the spot rate because that would be a normal kind of transaction. When we put the forward contract on the books, we got to use the speculative rate.

So it’s not a perfect mitigation of the risk, but it could still work as a mitigating factor of the risk. So that’s how we can use this in a practice. typical way for business purposes, although we’re looking at it now as kind of a speculative play, as we put it on the books, so that’s going to be the concept, we’ll put it on the books here, that will have to do an adjusting entry at the end of the year, that’s going to be adjusting the the foreign currency part, which is the payable to what it needs to be as of the end of the year.

And then we’re going to have it actually be paid off and we’ll look at the transactions in the following year with the foreign currency than the forward contract becoming do. So that’s going to be the idea. If we go back on over into QuickBooks, we’ll do that step by step. And then we’ll go into QuickBooks and add our information for it in a step by step process as well. First, adding the foreign currency and then thinking about how we’re going to record the initial transaction doing the adjusting entry, and then the maturity entries