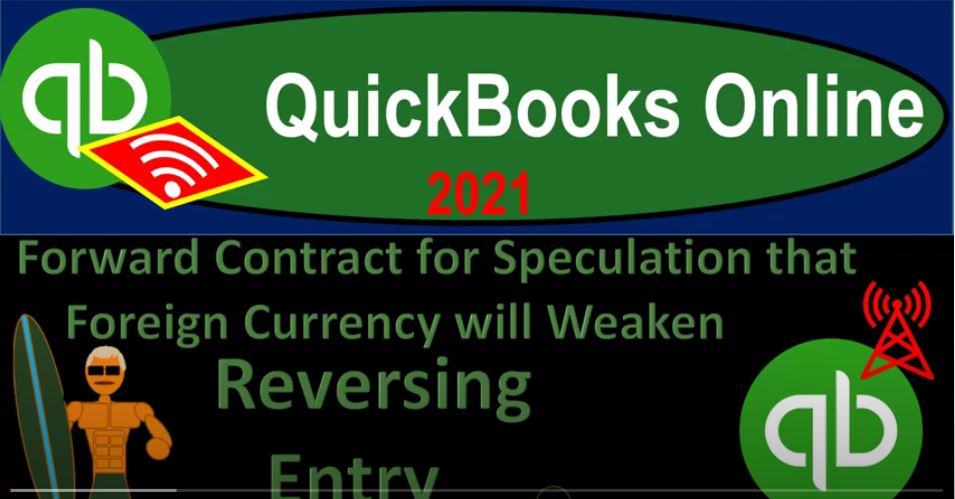 Doing that once again, right clicking on the tab up top and duplicating again, we’ll then go to the reports on the left hand side, we’re going to open up the profit and loss the P and the L, then we’re going to do the date range change up top from a 101 to one to 1231 to one, run it close up the hamburger hold down Control scroll up just a bit very uninteresting report nothing’s in it thus far. But that may change we’re going to go to the tab to the left. Now, back down to the reports on the left hand side. This time opening up the balance sheet report the good ol bs report.

Scrolling back up top, we’re going to do the date range change a one a one to one to 1231 to one, run it closing up the hamburger. And in prior presentations, we have now entered the forward contract, we did an adjusting entry at the end of the period. And now we have the accounts receivable on the books, it’s in dollars, we have then the accounts payable on the books, its value, it’s going to be paid in foreign currency. And we haven’t after 3900, which represents if I click on it, the amount that was the forward rate, I’m going to change the date to 2020. So we can see all the transactions in this account.

you’ll note what happened is we then on the second year, we did this adjusting entry to adjust the payable to what it should be, as of the point in time that we’re going to pay it. And then we went down here got our cash that we did last time and then we paid off the payable and the receivable. So this time, we did not do this adjusting entry. And we did not do a reversing entry, we’re going to do a payable, which will record the difference between when we put it on the books to 7000 3007. And when it’s going to basically come off the books or the value at the end of the day,

which is going to be I believe this this item, the difference being that 150 total, and then we’re gonna have to think about breaking out between the 200 loss is what we should have in year one, the 50,000 or the 50 gain in year two. So let’s go back on over we’re going to do this. Now I’m going to do both of these we’ll take the receivable off the books and the payable off the books, the receivable will be easy, because it’s just cash that so we’re imagining it’s due, we’re just going to receive the cash for that straightforward, no foreign currency transaction, the payable is the one that’s going to be a little bit more tricky, so let’s get that receivable off the books first.

So I’m going to go back on over to the tab to the left, going to hit the plus button, we’re going to say we enter the receivable with an invoice. So now we’re going to say receive payment received payment type of form. So we’re using kind of the invoicing process to do something a little bit different than what would normally be done. But same same kind of concept, we’re gonna say now that we’re going to receive from the broker in US dollars transaction then then showing up down at the bottom.

There it is, there’s our invoice, we’ll pick that up. And we’re gonna put this in place as of is for one the right date, yeah, for one of the second year so 40112. And this then is going to be going into the checking account for the US checking account, not the foreign currency checking accounts, you got to make sure that you’re picking up the proper checking account there. And that’s just the straightforward check transaction. We’re going to get the cash cash going up accounts receivable going down. Let’s go ahead and save it and close it and check it out.

So save it, close it, check it out by going to the tab to the to the left hold Down control, I’m going to go back up to that one to 5%. So that we now have in the checking account, if we go into the checking account, we’ve got this receivable because that’s what the they promised us at the end of the time period of 3007. And scrolling back up and the other side, then removing the receivable here. So this has now gone down to zero, that 3007 hadn’t changed since we put it on the books because it was in US dollars.

which is the 5000 in pesos that we had on the books. And then we would typically have the exchange rate then showing up up top and it’s not pulling in for some reason, the exchange rate, sometimes I have a problem with it pulling in the exchange rate. And usually it’s with me, increasing or decreasing the size of the screen. And if it doesn’t show up, sometimes I record it, and then I’m going to go back into it, which isn’t the best kind of way. But let’s go ahead and record this.

It’s currently on the books, add a one for one difference, and then I’ll go back in so that I can see the exchange rate. So I’m going to record it here. And it’s going to record it as a one for one exchange rate, save it and close it. And then I’m going to go find it on the financials by going back to our balance sheet, run it hold down Control, I’m going to scroll up just a bit. And that should have put it into we paid it out of the checking account here if I go into the checking account. And there’s our bill. So now I’m going to go back into that bill and go into the bill.

So now it was at 5000 pesos being the 3850. In the US dollars. Obviously, that’s just a practice exchange rate. So now it’s recorded out again. So I’m going to say save it and close it, and the transaction our editors, so I’m going to say yes. And so then if I go back up top, and I go back then to the report, let’s go back to the report to the balance sheet. Now the checking account went down to zero, which makes sense because we put exactly the amount of money needed to pay off the payable in terms of the current exchange rate. But then down here, you’ll note that we’re still left with that $200,

Other side then going to the accounts payable here, if I go into the accounts payable, and I change the beginning date up top from 2000 to 2021 and run it then you can see we put this on the books. As of we put this on the books at 3007. And then we had a journal entry, I’m going to change this journal entry, this actually should have been an adjusting entry. And we should have put it on the books at the end of the year which should have been 1231 two, or 1231 to zero at the end of the first year 1231 to zero, and then I’m going to save that and close it.

So I’m going to say Save and Close. So that shouldn’t have an impact on on this, it just changed the ordering of the transaction. So it’s still in the in the same year. So we put the bill on the books at the 3007. We update it for the end of the period to to the three nine. And then we had the pain of the bill at the three seven. So notice what QuickBooks did, it took the bill off for the amount that we put it on the books for sale and that’s what the pay bill does that nicely.

And then the difference between those items will be on the income statement. So if I then go back on up and this one right here, by the way, on three one should actually be a According to our problem, I believe on four one. So let’s change the date there as well. And say this is going to be four one. And then we’re going to keep our exchange rate, which is the point seven, seven up top. And we’ll use that exchange rate. And then let’s save and close that. So we can get our dates properly aligned here, you must select a vendor, we have the vendor, okay?

Okay, so the date should be good. Now we put on the books, the bill on 10, one adjusting entry 1231. And then for one, we paid it off. Now the difference between this transaction and and what was on the checking account is going to be on the income statement now. So if we go back to the income statement, income statement, run that report, now we have something in this time period, we have 150, which is the change that changes the total change.

So it’s good practice oftentimes to have the Adjust the reversing entry. And that allows us to use the pay bill feature, which is which is a great system because then it will basically record the gain or loss for us in normal circumstances. And just with those cut off periods at the end of the period that can cause us some problems. Let’s open up the trial balance at this point, go into the reports down below.

Opening up the trusty trial balance, check our numbers there good old trusty TB, and running that for the second year of a 101 to one to 1231 to one, let’s run it. So this is what we have thus far. It doesn’t quite tie out to what we have at the ending point on our year two because we need to make our reversing entry which should take care of this this added amount of a 200 here and properly record our gain and loss