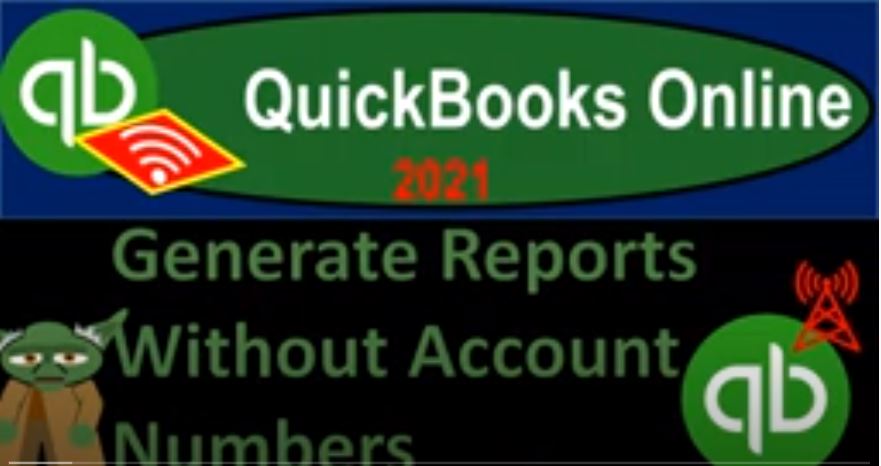 So I’m going to close this back out. And if we go then to the accounting tab on the left hand side, we now see that we have our chart of accounts and we added our account numbers and they look great. But at this point in time, we might want to generate the reports and the reports will then be using the account numbers in order to help to order the reports the ordering of the reports, which will first be an order by basically account type and have in essence, the balance sheet on top of the income statement.

But then within each category, it will be ordered by account number, the problem could be that we have account numbers, then in the reports, and you might want to then generate reports without account numbers. And see we’ll think about a couple methods we might take in order to do that. So if I go back up top, for example, and I right click on this tab and duplicate this tab, let’s open up our main two reports balance sheet and income statement. So I’ll duplicate the tab again, right click on the tab up top duplicate again, we’ll open up the good old balance sheet and the income statement otherwise known as the PnL, the profit and loss.

And then within those groups, we’ve got been the ordering by account number rather than by alphabetical order. So you can see that here you can see it clearly with the fixed assets as we saw in the prior presentation. Now having the fixed asset on top even though accumulated depreciation in that category would be on top if it was using an alphabetical order, which would look weird and does when you don’t have the account numbers.

Because we only have basically two main categories of accounts income and expense type of accounts, especially within the expense type of accounts, you can see how you can get a lot more control over the ordering of the accounts possibly doing something like putting the accounts that have the larger dollar amounts that are more important possibly at the top of the report or ordering in whatever way that you think would be most useful with regards to the income statement. And the income statement can of course be quite long.

So we could take a look at that but it will also you would think here reorder the the accounts down below. So let’s take a look at it. We got the accounts here rents on top. Obviously that’s because that’s driven by an account number. If we’ve removed the account numbers will still have the same ordering in debt will have income and then expense accounts, meaning it’ll still be an order by account type, but then within the categories such as within expenses.

So we’re gonna say save it, and then done it, save it and done it. And then it should adjust our reports, we might have to refresh the reports. But if I take a look at them, they refreshed him already, I got to do the range change again. Oh, 101 to zero to 1231 to zero, run it, close the burger. And so there we have it. Now it’s been readjusted here. And it looks nice, because it doesn’t have the account numbers. And we might like that. But now of course, it’s an order down here, as we can see in the expenses with advertising on top. And it’s because within the category of expenses within that account type, the advertised advertising is the first it starts with an A, and it’s like an alphabetical order.

So one thing you could do is you could still do some sorting without the account number. So for example, you might want like the largest number on top. And so you can still do some sorting with without the account numbers like that. So for example, I might say, like in this sorting drop down up top, I might say sort, in descending order, descending order. And so now you got kind of like within these categories, it’s nice here, because it doesn’t, it still put, you know, still have income accounts, and then expense accounts. So it’s not gonna it didn’t change the account types in this example here, which is nice. But within the account types, that’s when we’re saying, hey, look, put the biggest number on top.

And then we’ll export it to excel and say, Okay, can we clean this thing up in some other way than just simply turning off the account numbers defaulting us back into reordering the accounts in the way that we didn’t want them to be ordered, possibly in the first place. So I’m going to go to the cog up top, we’re going to go to the account and settings, once again, and then we’re going to go into the advanced area. Because we’re advanced accountants here, we’re in the advanced area. So that kind of worries some people to hit that Advanced button.

And let’s just say well, you know, is there an easy way for me to get rid of the account numbers, and it’s not the easiest way. But there’s a couple ways we could do it. So I’ll just show you how we might want to do that. We could say alright, I want to get rid of the account numbers, but not change the order. Let me try to do a good old export, to excel and do some Excel magic. Magic work in Excel excels where most magic in the world happens. The place of magic. So then I’m going to hold down controls will scroll up a bit.

So there we have our report. Now you could do kind of like a formula that would would extract the first three, or what is that five digits and try to use the formula that would then extract it another way you could do it here. I mean, obviously you could go in here and just each one of these accounts, I’m gonna double click on it and like remove the account number. So that could work for if there’s only like two accounts here, I’ll just remove the account number.

Okay, there it is. And then if you have all these accounts, you might say, Well, is there a better way I can do that, like, you know, I’d like to do it without having to double click if I had a long list of accounts to do this, and it’s like, Alright, I can do that pretty quickly. I can I can copy this. I’m going to copy it. And I’m going to put it over here. And then notice it’s got a wrapping feature on it because it’s wrapping the cells. And I like to remove that anyways by default. So that’s going to be in the home tab alignment, and I’m going to get rid of the wrapping feature.

So now it’s it’ll go over one cell, and then I’m going to expand column D and then I’m just going to try to move For the same thing without the account numbers, and one way you can do it is that you know, Excel will start to read what it’s trying what you’re trying to pick up. And I think that’s one of the easiest ways it’s not very cool, because it’s not a cool formula. But it’s pretty easy.

You could just say, like rent, I’ll just start typing this in here, lease and then the off and the second one office, it starts to say, Hey, are you trying to type the words without the numbers, and I’m like, yeah, that’s what I’m trying to do. And then I’ll just hit Enter, and then it does the whole list for me. So if you have a whole long list like that, then you can change that. And then I could just say, right, now, let’s just copy this. And I’ll paste it right back in here. And I’m going to paste it with just the values, I’ll paste it with the values only. So it doesn’t doesn’t change the formatting values only. And then I want to indent it, I lost my indenting.

So I’ll go to the Home tab, alignment indent. And there we have it. So obviously, that would be something you could do for long lists. If it’s not a long list, if it’s just one thing, I could just delete that. And there we have it. So it’s not, you know, the cleanest way of of doing it, you got to do a little bit more work to do that. And you may still have some formatting issues with it, but it looks, it looks pretty good. And then you can of course, delete these two rows, like that.

So that takes a while, it’d be nice if you could just kind of turn them off and on in QuickBooks in the report. But in this format, you can delete them even with a pretty long financial statement, you know, pretty easily and then and then print it out in Excel, which doesn’t take too much time. And again, it could be something that kind of sets you apart from other people that that don’t know how to do that. Right, you can, you can make reports fairly easily.

So it’s right there, I save it as a PDF. Now, if you have multiple sheets, however, and you want to print them all as a PDF, you can also print them on one sheet as we’ve seen in prior presentations using something like a PDF printer. So for that, you go to the printer option. And you would use a key I use a cute PDF printer, it’s a free option, so you could search for it. And then instead of printing it to a printer, it’ll send it to a cute PDF printer.

And the advantage of that is that you could do that for not only just one sheet, but you can do it for multiple sheets, you can hit the workbook and and print the entire workbook and then you can print multiple reports on one PDF file. So in that format, then you can actually remove the account numbers and you can put like a balance sheet income statement multiple other reports into one file, which again, can can set you apart because some people you know, it takes a little bit of maneuvering to be able to do that. Also just realize that that this is a little out of center here.

And you could do more more formatting in Excel to kind of clean that up if you so choose if you want to kind of center this thing you can see here, this is where the the the end is that that dotted line and you usually get that by going to the layout and then back on over that’s what I do and that and then you could see where the end is if you wanted to, you know, adjust this report a bit and try to center it more and do things like that. Obviously you can do those types of functions. within Excel. You have a lot of options to do that kind of stuff, too.