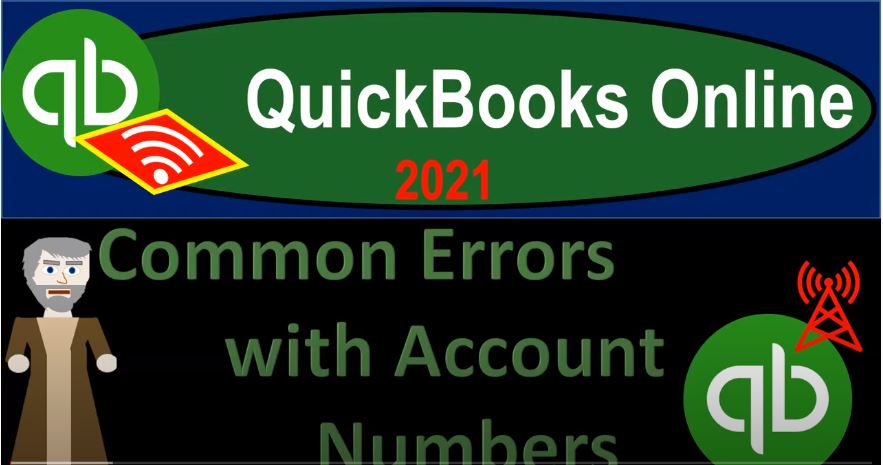 And then more categorized, more detailed categorized in in those those major groupings, it has to be in that order, because that’s going to be the order of the financial statements balance sheet, and then the income statement. So if you put in account numbers, you got to make sure that they line up to that ordering of the accounts. Otherwise, the account numbers will not make any sense. And they will they will detract from from the reporting and the data input rather than helping to increase your ability to report and enter data more quickly.

So not providing enough room between account numbers to add new accounts. So it’s tempting when you put into account numbers to just say, Hey, here’s my list of accounts, possibly you have a different number, or starting number for each group, for example, assets starting with a one, liabilities with a two and three for equity and so on. But then many times people will just basically put the accounts right next to each other. So for example, the asset account for cash is 101.

This account type in the expenses in the one hundreds area, the accounts that Start with one area, I should say. And that doesn’t make any sense, because when you make the actual reports, it’s going to be in the format of the balance sheet, grouping together assets, liabilities and equity, and then the income statement, income and expense. So although you can then sort by this number over here, this is still going to cause you a problem, it doesn’t make any sense, because when you create the financial statements, it shouldn’t be starting with a one, it should be starting with a six. So then you kind of want to keep it ordered by type.

In other words, and then I’m going to I’m going to read refix, this one and put this one down. At the bottom, we’ll put this one at, go back on over Hold on a second. This one is the expense account that I put with a one, this one, let’s put that back down, I’m going to hit the edit button on that one. And I can’t I’m not sure exactly what I called it, I was like 6625, I think, and then we’ll save that.

And then so that means when you add the account numbers, it’s got to kind of be in alignment, it’s got to kind of make sense, in terms of the chart of accounts that you have. It also makes it a little bit more difficult when you create accounts like as you’re going. So for example, if I was to create an account, as I enter an expense form, it might be a little bit more difficult to figure out what the account I want to pick up because I got to make sure that I pick up the account number two as I add the account.

And then I’m going to go down here and say that the category I’m going to add a new category, I’m just going to call it test category, this is going to be an expense, test expense, just test it out. And then I’m going to say it’s an expense type of account, I’ll keep it in the advertising, but at the name is test expense. Now note, it’s a little difficult to know the number here, I don’t know what the number is because I don’t have my chart of accounts kind of in front of me.

So I can’t really see you know the number. So oftentimes, when you’re just adding a new account, you just won’t put a number here. And that’s very, you know, typical to do that. So I’m not going to deal with the number and then just add this account. And if I was to put like 100 in that in that amount, then I would add something now I’ve added an account, I didn’t put an account number with it. And that causes problems. One way you can check the account number, as you add a new account is before you add the account, hit the drop down and look at your expense accounts.

And then think about the number that you want to be adding when you add the new account if you’re using a form, and then go back in, create the account with the number in your mind as you go. But if I add this account, then if I if I say save it and close it, then now if I go back to my chart of accounts, now I’ve got this account in there with no number in it. So I’m going to scroll down and say that we have our account numbers turned on. But I’ve got this account down here with no number in it. And that’s typical to do when people are rushing the data input.

So you want to consider again, what should the number be? What do I want it to line up? It’s a little bit more difficult when you do that data input. But it gives you that more control meaning, you know, if I have an expense account that I’m adding that I have to think not only that it’s an expense account, that’s going to be in the expense category, which is just going to be an order by alphabetical order. But also, what’s the account number? Where do I want it to land?

Where do I want it to lie with respect to the other expense accounts? Now the other common problem? Like if I was to add this account and say, well, I’ll just put it after the last one, I’ll just put it after the last one, that one is six to 500. So let’s make let’s make this one, I’ll just add the account number and make it 6250162501. Now that’s a problem, because now I have these right next to each other the right like what if I wanted an account like right between those two, I can’t do it right, I’d have to even though I have five, five digit numbers,

I would still have to call this 625 or 1.5, or something like that in order to squeeze in account bump between those two. So when you’re in the expense areas, you might not that might not be as big of a problem. But but it’s still not something you want to do I have all this room down here. That’s the point of having the room. So when I make this new account, I shouldn’t be calling it, you know, one account up, I shouldn’t be saying okay, I’m just gonna, I’m gonna call it at least, you know, I would say at least 10 numbers in between that we can have, we can have that there.

And then if I made a sub account or something like that, that’s when I might want to be a little bit more restrictive in the numbering of the accounts. Meaning if I made another account, that’s a sub account of this one, I might want to call it six to 511 or one two, or then have a much smaller grouping of distinquished. Just you know, distinction between The accounts so those are those are some of the common errors.

So if you have a nice broad like five digit account numbers, and then you group your account numbers by basically, you know, assets starting with a one, liabilities with a two equity with a three for for sales and so on and then you leave a lot of space between each of each of the accounts that you’re setting up.

That means that you every time you add a new account in the future you got you got a lot of room to grow your your chart of accounts is not going to become too restrictive as you grow because of course we’re going to grow and be like million dollar company. And you know, our chart of accounts that we started with, we’ll still be able to handle that all the way all the way through that that journey.