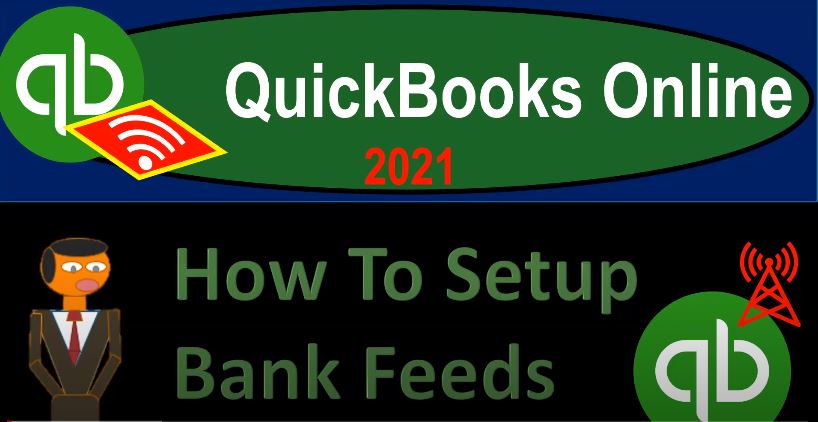 QuickBooks Online 2021. How To Set Up bank feeds. Let’s get into it with Intuit QuickBooks Online 2021. Here we are in our quickbooks online bank feed test file, we’re going to be thinking about the process of setting up the bank feeds and or getting the information from our bank into the accounting system directly from the bank into the accounting systems, we have a couple things that we want to keep in mind as we do so one is going to be how much data do I need?

Do I need a lot of data that’s going far back in time into the accounting system, can we get that much information to the bank is there some kind of limit as far as how far back I can get the bank feed information from what is going to be the starting point that we need in our system, if we already have data in our QuickBooks system, we want to make sure that we’re not duplicating the data. So what’s going to be the cutoff date that we need the information that’s going to go into our system, and then push forward from that point in time.

Now, the actual setup of the bank feeds is usually pretty straightforward. Just connecting to the bank, that’s going to be an easier and easier process. Many institutions, most large banks will have the process set up fairly easily, they might be different a little bit in terms of the verification process. But most large institutions and even smaller institutions that are banking institutions have the ability to set up the bank feeds, and you can kind of figure out how to set it up pretty quickly.

That’s not usually the challenge, the challenge is going to be how to get that first information to be set up correctly. And then once it’s all set up, it should be fairly straightforward going forward. So under the transactions tab, that’s where you have the banking information.

So we’ve got the banking information up top, we have the Connect accounts down below, or we can upload transactions, uploading transactions can be useful, especially when you’re first doing the connection process, especially if the bank doesn’t have to say as far back of the data that you need meaning, for example, if you need all the information for like 2020, and you’re trying to create your entire books, and at one time, so you can do your taxes, for example, or something like that.

And the bank is saying, hey, look, I can only give you so much data goes so far back in time with a direct connect to the bank, then you might want to download information from the bank and see if you can get a longer portion of the time upload it, then here. Once you have that uploaded, then then maybe go forward from there connecting directly to the bank.

And then you can push forward from that time, whether you connect to the bank or you have the transactions uploaded, meaning you download them from the bank, and then you upload them into the QuickBooks system, you will basically be at the same starting point, once the data is in the QuickBooks system, meaning the data will not automatically go directly into the financial statements, you will not be building the financial statements from the data, at least not for the first few months, you will then have the information that’s kind of what I would call bank feed golembo.

And you’re gonna have to go in there and then kind of figure out where those bank feed transactions should go. As you do that, then it’s going to be easier and easier, the QuickBooks system will memorize transactions, and it’ll be easier to go. So those are going to be basically our two options. But let’s first think about logistically, what’s going to happen when we set up this to the bank. And you can think down here for to do that. Let’s go to the accounting tab down below, we want to be in the chart of accounts, I’m in the accounting tab, the chart of accounts.

So although their liability accounts, you can do a similar process. So it’s similar kind of process that can be a little confusing at first, because the credit cards you know this liability account, but the idea is going to be the same thing, you’re going to connect directly to the credit card, the information from the banking inside of things, the financial institution will then flow into your system, then we will have to take it out of what I would call bank feed Limbo, and then assign it out.

So let’s go back up to the transactions up top. And then again, connecting to the bank is usually going to be a fairly straightforward process. Now, we’re not actually going to go through the full connection here. But I’ll go I’ll start the process here. Because again, the connection usually isn’t the problem, usually not the difficult part of the bank feeds, it’s once you got the data in the system, and then you’re kind of overwhelmed with data and how you’re going to integrate that into your system. That’s kind of the confusing part. So we’ll just take a look at the connection here.

And then when we actually do the upload, we’re going to actually also go to the bank or imagining we’re going to the bank, download the transactions, and then upload them. So we’ll actually upload the data using this feature. That’s what we will demonstrate here. So that we can practice that process as well. Again, in practice, you may be in that situation, for example, if you’re trying to reconstruct an entire year’s worth of data or multiple years worth of data at one point, because again, you could be limited in terms of how far back in time, you could go with the direct connection.

And so you know, you can search for other institutions, you got the credit card institutions up top, of course. And like I said, even even a lot of the smaller banks are, are are getting better at this, if you have problems with it, you can contact the bank and the institutions and larger institutions could have whole departments that are basically dedicated towards, you know, working with issues with QuickBooks at this point.

So it’s pretty, it’s pretty nice. So let’s just pick one here. And also know that they do have the Pay Pal now in in the system, which if you’re doing online kind of transactions, or gig work or something like that is really nice. So I’m going to go to chase, we’re going to assume at the chase account, and then sign into the account, start by connecting your chase account with Intuit, the makers of QuickBooks Online Edition, go to the bank site to sign in and connect your accounts, then we’ll return here and bring in your transactions.

And you can actually contact the bank and they can kind of help you to walk through it and connect it out. So that’s basically as far as I’m going to go with this because we’re then going to go through the second step here or the second option, and imagine that we’re going to be downloading the data. So we’re going to go through the process of downloading the data from the financial institution, which again, we might do if we need a whole lot of data like a full year’s worth of data when we first start, and then we’ll upload it to the system, once we upload it to the system will basically be at the same point whether you do either of these options.

Once the data has come in from the system into QuickBooks, you’ll be at basically the same point we’ll be at Bank feed limbo. And that’s when the difficult part starts. That’s when we have to go through the data that we have compiled, and then allocate it out into the system so that it will then be used to make the financial statements in a way that’s going to be as efficient as possible. So we’ll start that next time.