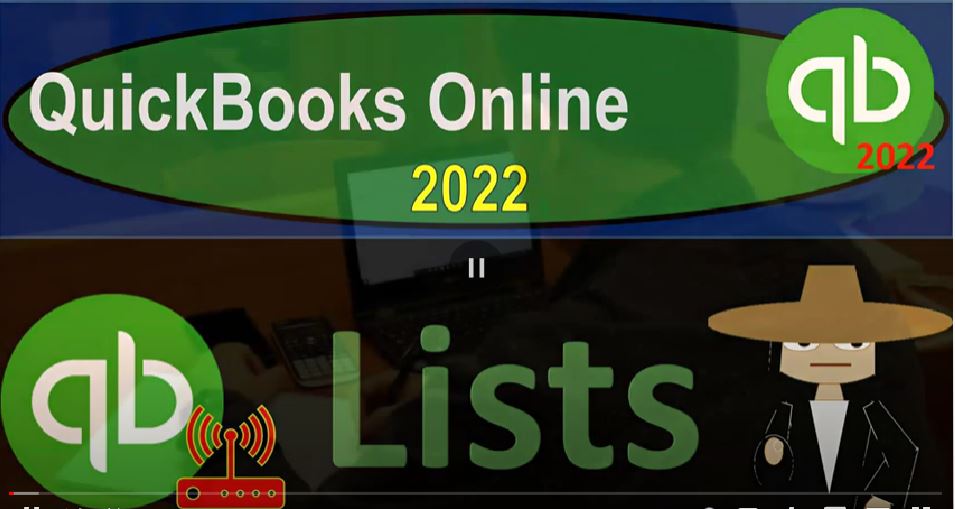 QuickBooks Online 2022 lists Get ready because it’s go Tom with QuickBooks online 2022 Online in our browser searching for QuickBooks Online test drive going into the test drive choosing the United States version and verifying that we’re not a robot sample company Craig’s design and landscaping services holding ctrl scroll and up a bit to get to that one to 5%. We also have the free 30 day trial version open just so we can take a look at the Business View as opposed to the accounting view.

If you don’t have access to this app this time, that’s okay, we’re going to look at it more in the second half of the course. Jumping back over to the Craig’s design and landscaping services, we’re now looking into the lists area. Now remember, last time in prior presentations we’ve been focusing in on this plus button, which has the normal type of forms and other types of items, forms typically used in order to do the day to day data input that’s going to be used to then construct the financial statements balance sheet and income statement.

Now we want to take or profit and loss. Now we want to take a look at the items that are going to be kind of like the underlying items that will typically be used, so that we can then set up the normal form so they can be input as easily as possible. And for that, we’re going to go to the cog up to the right hand side. So the cog is usually what you want to think about with your settings, and your underlying kind of stuff that you got to put together. So that you can make your day to day transactions as easy as possible the day to day transactions then being done with the plus button over here.

And then your centers and your other tab areas on the left hand side. So if we go into the cog, then we have this item over here called lists. Now lists is a term that’s not really an accounting term, per se. It’s more of like a QuickBooks type of terminology. And it kind of started when QuickBooks Desktop had the drop down lists that you might be used to back when Microsoft Office had those for like Microsoft Excel, and word before they went to the ribbon up top way back, when will the desktop version always have those lists as a drop down.

And they happen to house these kind of things in the lists, which happened to be those types of things that are kind of like the backup kind of stuff. That’s the underlying stuff on which the try financial transaction forms will lay in order to build the financial statements. So now we still use this terminology, even though we don’t have the dropdowns anymore, or they do on the desktop version.

But on this online version, we’re going to carry over this terminology of lists. And so if we go into the list, you got your items here. And then you could go into the all lists, which gives you another kind of breakout of these all these lists. So I’m just going to go over them in general here. And then we’ll go into some of these lists in more detail in future presentations. Now, remember that many of these items they’ve already been kind of set up, if you’re going into an accounting system that’s already been set up.

So then you’re not going to have to go through and set up the list, but you want to have an idea of what the lists are doing. Because that’ll give you a better idea of what you are doing when you do the data input will be what will be the impact on the financial statements. Then in the second half of the course, we’ll set up a new company file, where we’re gonna have to think about these some of these items in a lot more depth, because that’s when you really set up the lists.

And you can think of it from the ground up on how you’re going to set up the lists items, so that the data input can be as easy as possible and the construction of the financial statements can be as easy as possible. So the primary lists that we have, the first two that will probably come to mind is the chart of accounts, the chart of accounts is going to be the accounts on which that the transactions will be built that will then be used to construct the financial statements balance sheet and the income statement.

In other words, the balance sheet and the income statement, the major two financial statement reports your balance sheet and profit and loss, p&l, whatever you want to call it are going to be constructed from the chart of accounts, and that they’re going to be using all the chart of accounts that have activity posted to them through financial transactions, which were in that plus button, all the forms, the invoices, the sales receipts, the bills, the checks, and so on, and so forth.

So from here you can schedule transactions to occur occur either automatically or with reminders, you can also save unscheduled transactions to use at any time. Then the other big list that should be one of the first things that comes to mind are the products and services. Sometimes you’ll hear the term item lists, because that’s what was used in the desktop version.

So if you hear like inventory items, or service items, these are the things that are popping up when you go into an invoice or when you go into a sales receipt. And if you’re purchasing inventory, they might be there when you do the purchase order and the bill or check as well when you’re paying for inventory.

And so these are really important kind of things that you want to think about no matter what type of business you’re in, if you’re selling inventory or doing services, because that’s going to be kind of how you’re setting up your billing type of process that you will be putting into place.

So this is really important to make the data input for the invoices and the bills and whatnot as easy as possible. So it displays the products and services you sell. From here you can edit information about product or service, such as its description, or the rate you charge. Now, we’ll talk more about it later when we get to the second half of the course.

And we’ll do a little bit more of a discussion on it in this and later presentation as well. It’s also an area where you have to think about your sales tax instead of your sales tax and whatnot, you also have the product categories. A means of classifying items that you sell to customers provides a way for you to quickly organize what you still sell and save you time when completing sales transaction forms.

So these two the products and services or items, and the chart of accounts are probably the primary two lists that should come to mind as like essential to creating the financial statements, then the reoccurring transactions can be added on if you want to try to automate some more transactions.

And then we’ve got the custom, the custom form styles. So we could set up basically custom templates for our forms. And this would most likely be used most often with those forms that are going to be issued to customers. So we have the defaults for like invoices, for example, that are going to be going to the customer. And the default is really good to basically just enter the transaction, but you might want to do some customization to those forms, to make them more marketable and so on,

we might have another section that kind of focuses in on the custom customization of the forms as well, with the first parts of the course, we’re going to focus in on just the transactions behind the forms, and then get into more of those, the style of the forms, which of course is important, but for different reasons. In terms of the style, so we might have a section that gets into that, that’s not really vitally important to have, of course, to just recording the transactions.

But it could be a nice, a nice thing to look into as well. It’s in the lists, payment methods, displays, cash, cheque, and any other ways you categorize payments you receive from customers. So when you’re thinking about the payments that you are receiving, you could set up your methods of receipt, which will kind of pop up in that drop down. So American Express cash cheque, and, and so on, and so forth.

And then you’ve got your custom fields, which you can sort track or report the information that matters to you add custom fields to your forms, so that you can capture more business related information. So if you wanted to add a custom field to like the invoice with like a sales rep field or something like that, then you can add the custom field.

And then you can use that field to kind of sort in your reports by so we might talk about that a little bit more in the future. But what the first thing with the lists, you want to think vital lists are the Chart of Accounts and the products and services. Those are the two basically vital lists that you’re going to have in place.

And then these other areas are things again, that you could set up to kind of customize and automate and make more easy the data input that once set up then will make it easier to do the data input for the forms that will typically be in that kind of plus button. So we’ll go into some of these in more detail in future presentations.