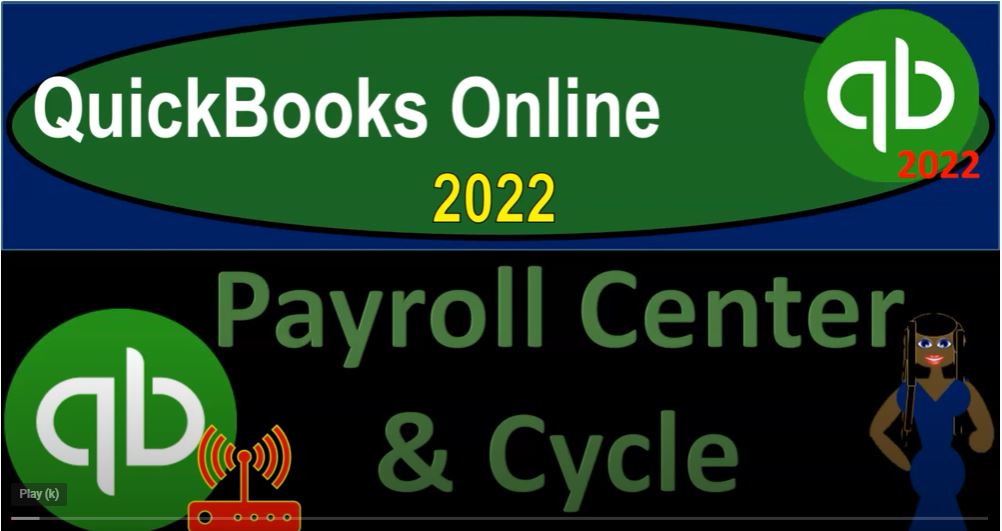 QuickBooks Online 2022 payroll center and cycle the Get ready because it’s go time with QuickBooks online 2022 Online in our browser searching for QuickBooks Online test drive going into the test drive going into the United States version and verifying that we’re not a robot sample company Craig’s design and landscaping services holding control scrolling up a bit to get to that one to 5%, we also have the free 30 day trial version open just so we can take a look at the Business View as opposed to the accounting view, you might not have access to this at this time.

That’s okay, we’ll take a look at it in more in the second half of the course. Jumping back over to the Craig’s design and landscaping services. In prior presentations, we’ve been going through the items in the drop down by cycle, these being the items that are going to be the general kind of transactions that will be put in place that will be made to create the financial statements balance sheet and income statement or profit and loss, we’re focusing here on the payroll cycle with a payroll cycle will typically be kind of in the payroll section,

the payroll center, you might call it employee center, payroll on down below, and then we’re in the payroll center, closing the hamburger up top. Now, there’s not a lot of information in this sample file with regards to payroll. So let’s just kind of talk through the normal kind of transactions that would be put in place in payroll, remembering that you could have payroll processed either within the system in QuickBooks,

or outside the system in some other third party like an ADP or paychecks, if you’re doing it within the QuickBooks system, the general process would be one, you set up payroll here by the payroll, so that the QuickBooks, you have access to the payroll, then you go through the payroll set up process, which will include telling Intuit what your system is with regards to payroll, which will include your location, some of that process will be easy and kind of automated, because if you’re in the United States, and I’m gearing this basically to the United States, because that’s what I know here.

So if you’re in the United States, some of the taxes will be blanket across the entire country, because there are federal taxes of those will be the federal income tax, the Fit Social Security and Medicare. And then some of the taxes will be different based on your location, which are going to be the state and local taxes. And then you also have some withholdings that are going to be dependent upon the choices of the employer and employee II. And those aren’t taxes, those are going to be benefits, but they act as withholdings, like a 401k plan, or a insurance plans and those types of items.

So you’re going to have to first think set up the payroll once the payroll is set up. And that’s often the most difficult part. And you’ll notice that one of the kind of plans of QuickBooks gave specifically the option of basically helping with the setup process. And of course, it costs more to help with the setup process. Once it’s set up, then it should be pretty routine to just do the normal kind of data input into the system. And you would write a check for the payroll.

So you process the payroll. And when do you process payroll? Well, that’s going to be a decision that you need to make internally Do you want to do the payroll weekly, these are the general processes weekly, or bi weekly, or semi monthly, or monthly? Are there common kind of payroll periods that you would have whatever your payroll period is, you’d go in, you process the payroll, you can think about that as actually kind of issuing the check at that point in time, which if it wasn’t for payroll taxes, and all this other stuff would be really an easy transaction,

it would be like any other kind of expense that you wrote, you would decrease the checking account, you could just use the expense form. If it wasn’t for payroll taxes, right? You just issue the you know, you pay someone, the checking account goes down, the other side goes to Payroll Expense, but we do have the payroll taxes. So that means there’s going to be a lot of withholdings that are going to be involved.

When you process the payroll, it’s basically a payroll check, but you can have the gross pay. And then you’re gonna have the stuff that’s taken out of their pay, which includes the federal income tax, the Social Security, the Medicare on the federal side of things. And you might have state taxes that you’re going to have to take from them as withholdings, and then you might have what they’re calling voluntary withholdings, which are things like the 401k plan and the health insurance.

So that means they earned the gross pay. We gave them the net pay which is actually Coming out of the cheque the difference between the two, that’s going to be recorded in some kind of liability account. So So in terms of journal entries, we’re going to have the gross pay is going to be increasing the expense Payroll Expense of some kind, and then the checking account is going to go down by the net pay for what we paid them.

And then the difference is what we took from them, either because we were forced to for taxes or because it was a voluntary withholding for benefits, 401k and other benefits. And those go into a liability account, a liability account, which we’re gonna have to pay on their behalf, to the government or to the beneficiaries or whatever, in the future. So that Trent, that’s the general transaction.

Now, you can think about that transaction on an employee by employee basis, which we would have to of course, do if we process the payroll within the system, because we would have to give each employee either individual detail with regards to gross pay withholdings net pay on a year to date basis, and on a on a basis check by check. But you can also kind of think of it in general on what’s the impact of the financial statements as if all employees were like one big employee with one journal entry.

And you could think about the impact on Payroll Expense, cash, and the payroll liabilities as if they’re one big, you know, entity. And so then what would happen that would be processing the checks, then, of course, you’re going to have to take the liabilities that you have gathered, and you’re going to have to pay them to whoever you’re going to pay them to, which includes the federal government, possibly the state government, and whatever the beneficiaries are the insurance companies and the 401k plan and whatnot, as well.

state unemployment taxes, that are going to also increase the liability. So now you’ve got a liability that includes the liabilities that include the employee, he taxes, the employee, or taxes and possibly benefits that were withheld, that we now need to pay out. So at some future point, then we’re going to pay the liabilities to the state to the fed to the beneficiaries, those are gonna be the two kind of normal transactions that you do in the payroll processing cycle.

And, and so and then, of course, after that happens, we have the quarterly reports that you got to do the 940 ones typically, or what most companies will do, which if you have the full service of payroll within QuickBooks, hopefully QuickBooks will help you generate the the 940 ones on a quarterly basis, which should be if everything goes smoothly, just a reporting document, you should be just basically saying on it, it would be kind of like the 1040s.

If the 1040s were in a perfect world, and it wasn’t so complicated. In other words, you’re supposed to pay your actual income tax in the United States as an individual on form 1040 during the year. So if you think about yourself on an employee’s portion, your pay is take taken by the employer, or they’re supposed to take the amount that’s going to pay for your federal income taxes during the year, then when you file your tax return,

by April 15 of the following year, you should be just filing an information form saying, hey, look, this is how much I owed. This is how much I paid. And I don’t owe you any more. You don’t owe me any more because I paid you what I owed you. But you can’t do that on the ink on the federal income tax for the 1040.

Because the tax code has gotten way out of control in terms of complexity. So there’s no possible way that you can, you can actually know how much you’re going to pay exactly. Because we have a progressive system, which means you have different tax tiers going on. I don’t know exactly how much I’m gonna earn throughout the year, you’ve got all these deductions and these credits that make the actual 1040.

Way too complicated. But on the payroll tax side of things, we have more of a flat tax system, the federal income tax, it is what it is, we’re just going to tell you what we were going to withhold based on the information we have the Social Security and Medicare are actually more of a flat tax. So we don’t have this progressive tax system, which makes it impossible to know how much the taxes. So we should have already have calculated the tax, withheld the tax and paid the tax. By the time we form.

We have to do that on a quarterly basis. And then we’ve got the 940 at the end of the year. Er, which does the same thing, but instead of doing it for federal, instead of doing it for Social Security, Medicare and federal income tax, it does it for the Federal Unemployment Tax. And then we of course, have the W twos and the W threes and stuff that we have to do at year end, which again, hopefully, the QuickBooks system will have all the information to help you generate those reports as well and issue that information for the payroll.

Then you pay the payroll tax liabilities to whoever you got to pay them to, including the federal government. And that’s the normal kind of process you have. And then on top of that, you’ve got reporting reporting requirements, which are the 940 ones on a quarterly basis usually, and then the 940 and W twos and W threes on a yearly basis.