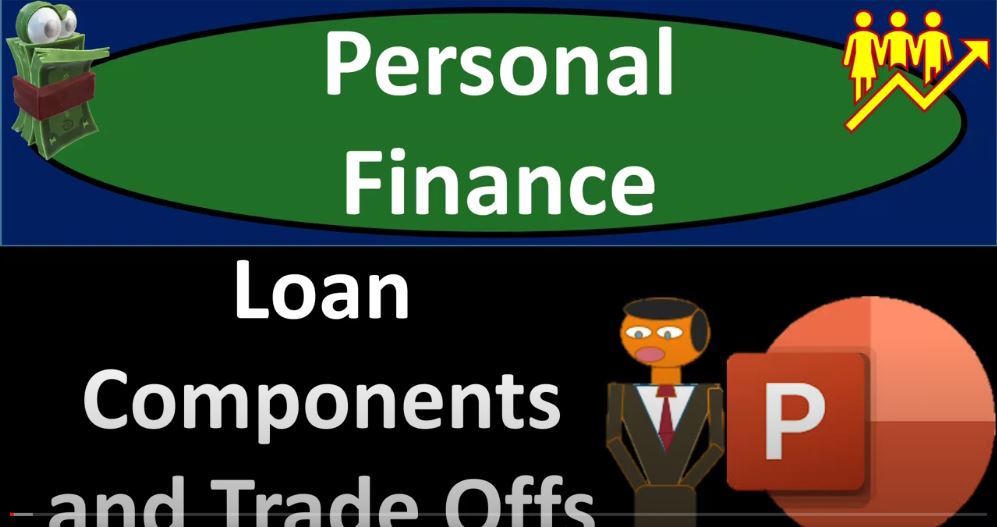 Personal Finance, presentation, loan components and trade offs. Prepare to get financially fit by practicing personal finance, loan trade offs. When we’re thinking about our financing options. When we’re thinking about picking up a loan from a financial institution, we want to know what the basic trade offs are, what are options can be in a general format. To do so it’s often useful to look at the basic components of the loan itself.

And generally starting off with a standard installment type of loan, then possibly moving on to more complex loan structures from that point, and also considering what the benefits to the financial institution will be. So in other words, the general components of the loan will include the amount that we need the amount that we need to be financed, and then it’ll include the interest rate, and it will include the term or the length of the loan, how long will the loan beep, and we can basically vary those those components. And if we vary those components, that then will vary the outcome in terms of what our payments will be, and what our interest rate will be.

So that’s one way, those are some options, just in terms of the standard installment loan that we can vary to figure out what our different options might be. And then you can move on to different kinds of like interest only payments and that kind of thing. More loan structures that are less standardized, then, of course, we want to make keep in mind what the objective of the financial institutions are, to them, what are the benefits to them of different types of options, obviously, their goal is to generate revenue, they’re going to generate revenue through interest and fees on the loans.

And possibly the more marketable you are, of course, because because other institutions would want to compete for someone’s business, if they’re if they think that individual has a high probability of paying back the loan. So the first things are going to be the term or length of loan versus the interest costs. So in other words, oftentimes, you basically need what you need. So you might if you need the money, if you need 100,000 alone, then the 100,000 is basically not something you can fluctuate too much at that point in time. So that might be a fixed component.

Whereas if you had the five year, then you’d be paying it off within the five year and so that then the length of the loan can have an impact on what the monthly payments will be. Now, also note that as you as you think about that, from the financial perspective, the institution’s perspective that you want to make sure that you might say, hey, look, I’m okay with having a longer period loan, as long as I have the capacity to pay it off earlier. So and that could be an option. But you want to make sure that you have that option open for you.

Meaning if you say, Hey, I’m going to take on a 30 year loan, but I plan on paying it off in 15 years or 10 years or something like that make you want to make sure that the financial institution hasn’t locked down, you know that you haven’t agreed that you’re going to pay it over 30 years because you could see why the financial institution what might in that case, if they think you’re you’re okay to be painted over 30 years would like to possibly collect interest for you know, a longer period of time. So you might have an option where you take a longer term loan, and then plan on if you have the capacity to pay it off in a shorter period of time so that you pay off less interest.

In total on the loan. Obviously you have taxes they could be involved in there as well if it’s a tax implication on it, which complicates things greatly which can happen and things like a home loan, but typically the idea generally been to pay less interest, of course, and try to get a payment that you can that you can live with and try to get the lowest interest rate involved. And then of course, from the lenders per set perspective, they’re going to be balancing out the risk versus the interest rate.

So that means that just, you know, within some range, they’re gonna say, if someone is more risky, if the if the loan is going to be more risky, then we’re gonna have to charge a higher interest rate, because we have to balance out the the the risk and the reward, meaning, if you were, if you were not a risky client, then you’re a competitive, you have the leverage there, you can go to different institutions. And in a competitive market, you would be, you know, someone that people wanted to do business with, and therefore, would lower the interest rates, in order to do business with you, you would think just from a general competition type of standpoint.

And if you’re more risky, then in order to pick out in order for a financial institution to cover the risk of the possibility, which is higher that you’re not going to be paying off the loan, they would have to increase the revenue to them, which of course, would be increasing the interest rates generally. So that’s the general, you know, back and forth flow that you’d be you’d be seen when you’re looking at your financing options. So then then, of course, the question would be, well, what are the options to reduce the lenders risk and lower the interest rates?

So if you’re thinking about this from the perspective of the lender, the idea then is to say is to say, it’s not just what do you want, because we want it because these are just kind of rules, and I’m just doing what the fuck you’re trying to say, from the lenders perspective, they should be looking to lower the risk. And if they lower the risk, then that should result in less, you know, less cost to you in the form of interest rates. So then the question is, how can I lower the risk for the financial institution and possibly pick up in a lower rate. So you could accept a variable or interest rate, set a variable interest rate. Now, this is something that that means the interest rate could change over time.

And that means that if there was changes in the market, then the institution is still okay. Okay, meaning, if going forward, the interest rates would be higher just because of the market and you locked in the rate for like 30 years or something like that, the the institutions on the line for the fact that they’re going to kind of lose money due to the fact that there’s inflation or something that happened in the market, that rates should be going up. So if you accept the interest rate to be variable, that could lower the risk and possibly result in lower payments.

Now, of course, that is a variant from the normal loan standpoint. So when you think about a loan, normal installment loan, for whatever term, usually the interest rate is fixed. And so when you move from a fixed rate to a variable rate, that’s going to complicate things a lot, because now you have a lot of uncertainty on you, you don’t know what’s going to happen in the future in terms of the interest rates, and if the market goes up greatly, depending on the terms of what that variability can be, that can be quite costly. So that’s a, you know, can be a big trade off to be moving from a very fixed rate to basically a variable rate.

But obviously, it would lower the risk from the institution side of things provide collateral to secure a loan. So obviously, if it was a home loan, or something like that, the home would be something as a collateral, and that means that if you were to default on the payment, then they can, they can basically take the home and sell the home, in order to pay off the obligation. That’s why the Home Loans allow people to borrow larger amounts than they would otherwise possibly be able to borrow without something on a collateral basis and the home loan being a, you know, classic example of that type,

and then provide upfront cash. So if you can provide, you know, a down payment type of type of situation, that’s going to especially if you’re talking like a home person purchase or something like that, that then is going to give the financial institution more security that you have committed to to this to this purchase, because you’ve actually put money in you’ve sunk the money in to the home and you’re you’re not financing as much of it, which should give more security to the lender that you’re both invested in it. And also that if there was a decline in the value of the home and or you couldn’t pay the pay off that they still can sell the home for at least the value of safe alone.

And if they have a longer term loan, they would actually make more interest over the longer term, which can, which can be good. But the fact that they’re getting paid back over the longer term could provide, you know, more risk, obviously, would be involved as well. So those are going to be the the general kind of trade offs that you want to keep in mind, both in terms of when you’re calculating your different loan options, basically, on your own, you can make the different variables and how long the loan would be, and so on, and so forth.

And then when you’re negotiating with the institution, of course, you want to keep in mind, what should what you would think logically would be in their head, which is their balancing risk versus the return that they’re going to be getting, and then try to think about the options that they’re providing, you know, in that light, so that you can be on the same page as you’re negotiating with the with the institutions