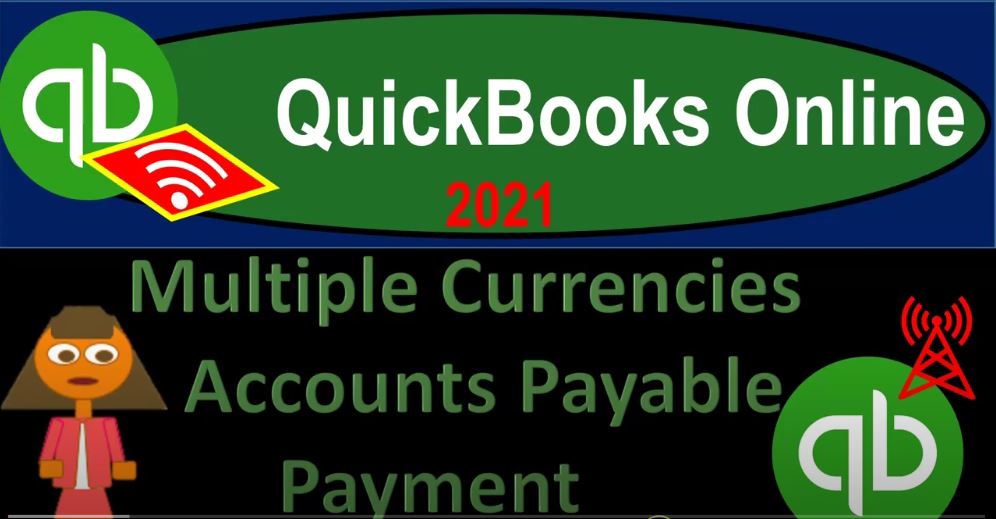 So we’re going to go into the good old P and L, the profit and loss we’ll do the date range change up top for the year 2021. I’m going to run that report, hold down Ctrl Shift up just a bit, then we’re going to go and click the hamburger go to the tab to the left, go back down to the reports on the left hand side, this time opening up the BLS balance sheet report going into the date range change up top once again, we’re going to make it for this year, so January through December 2021, I’m going to close the hamburger scrolling back down.

The scenario we have thus far is that we bought inventory on account meaning we put the accounts payable on the book when we purchased the inventory at the 33,000 we’re gonna pay it in the future, but we were gonna pay it in foreign currency. Therefore we use the current exchange rate to put it on the books. Then at the end of the month, we had to do an adjusting entry. So we couldn’t just use the pay bill to record it, but had an adjusting entry that we then recorded to another account down here for the accounts payable.

So if I go into this account, this would be the accounts payable or second accounts payable account that we use to kind of net these two out. So if I was to see the prior year and the current year, we made an adjustment at the end of the year. And then we reversed it doing a reversing entry at the beginning of the following year. So that now we’re basically back if I go back to my balance sheet, as if we didn’t do any adjusting entry. At this point in time, we’re back to reversing that entry.

So that now we can just do the normal transaction we would do when paying off the foreign currency account accounts payable, which would be simply to use the bill pay the pay bill form, which will then reduce the accounts payable, pay off the bill and then record the entire difference that gain and loss on the income statement. If we then go back on over to the income statement, you’ll see that we currently have this 400 as a loss at this point. And that 400 isn’t quite right. But it will net out against what will be applied when we when we do the final transaction.

And then we’ll have the proper amount of gain and loss reported in the proper periods year one and year two. If we see it in our Excel worksheet, we did it a little bit differently to get to the same goal because we don’t need that reversing entry here. Because we’re doing it in a journal entry format, we basically recorded the gain. So here’s the game that we recorded to the accounts payable representing the gain in year one. And then down here. When we when we made the actual accounts payable when we paid off the payable, then or when we’re going to pay off the payable,

we had to revalue it, which would result in a loss in year two. So in year two, we should have a loss of 200. In other words, and year one, we should have a gain of 400. The net result is a loss of 200 over the two year period. But we should be allocating in that format 400 gain year one 200. in year two, we currently have it in our books correct in year one, but then we reverse the whole thing. And it’s not quite right here because we did the reversing entry. And now when we do the final bond are payable, it should fix itself. So let’s do it in Excel first over here. So now what we did in Excel is we didn’t do a reversing entry, what we did instead is record and adjust our accounts payable to the proper amount to the current exchange rate.

And so that makes it easy to do one transaction with just two journal entries right now, which would simply be to pay off what we have in the foreign currency and pay off the accounts payable in foreign currency unit. So we would just simply say Alright, we’re gonna pay with the foreign currency units. So this 32 800 represents I believe, 20,000 pounds, the US dollar equivalent to 20,000 pounds, what actually being in the bank account, and then we revalued our accounts payable to the current amount so that now we can basically reverse these two out using the current exchange rate.

So then I’m just gonna say in that current exchange rate, we can calculate it again, was 20,000 20,000 times a foreign currency units times the current exchange rate 1.64. There’s once again that 32 eight, there’s that 32 eight. So when I record this, it’ll take these two accounts down to zero. Now, let’s do the accounts payable First, I’m going to double Click on it, go to the end of it and say plus, we’re paying off the accounts payable 32, eight, and then up top, I’m going to double click here, and I’m going to say plus, and we’re going to pay off the 32 eight.

Now, in QuickBooks, in order to differentiate, what we did is we reversed this entry entirely. And we didn’t record this entry, so that QuickBooks can can give us the full difference that happens. And that helps us to break out the accounting between the accounting department and the adjusting entry kind of process. So let’s see what that looks like. We’re going to go back on over to QuickBooks, and I’m going to go instead of using a journal entry over here, we’re just going to go to the pay bill form.

And when I go back into it, then if I scroll down a little bit, it then shows me the exchange rate. So it might be that I expanded the screen. So sometimes if I expand the screen or detract the screen, then some boxes will not show up. So I might have had the screen expanded. But here it’s showing a one to one rate, and that’s not correct. So I’m going to say I’m going to use our practice rate that we have in the problem, which was the 1.64. So let’s say now I’m gonna bring this up to 1.64. And just for this transaction, so there we have it. So now we should have this difference down below, there’s the 32 eight.

That’s the how much money we put in there. And we put exactly as much money in there, and foreign currencies valued at today’s exchange rate to then pay off is payable, going back then the other sides into the accounts payable down below. So if we go to the accounts payable account, it is now at zero. Notice what QuickBooks did there, it didn’t use the the current rate, it used the it basically took out the the original bill amount, the original exchange rate amount, so the difference between those two numbers, then QuickBooks automatically using the bill pay option will record to the income statement.

So if I go back then, and then take a look at the income statement and run that report. So we’re on the tab to the right now. Now we have 200 in it. What did QuickBooks just record though it recorded the amount of this negative 200 right here, so recorded that amount. And that amount is not right for the current period, right, it would have been correct for the totals the full period times band. But remember, we had to allocate part of it to the first year and part of it to the second.

But once we did the reversing entry, it nets out to the proper 200 it looks kind of funny because it’s 200 either way, but the hit was a gain and loss 200. So you’ll see you’ll recall that we had been the foreign currency gain in the in year one. And then we’re supposed to be recording a foreign currency loss in year two.

So this represents after netting out the foreign currency loss of the 200 wishes properly recorded, even though during that transaction that we just recorded it was a $200 gain, which is the total between the two right the total of the gain here and the loss there is a 200 gain for the for the full span of the two year time period, and then the 200 for the current period.

So if I go back on over using that adjusting entry process does leave us with the proper number. And it also allows us to do that adjusting entry at the end of the time period. without messing up the normal process of simply entering the bill and then paying the bill. So let’s open up our trial balance now. And just check our numbers. So our number should be tied out this time on a trial balance, we should be back to where we want to be.