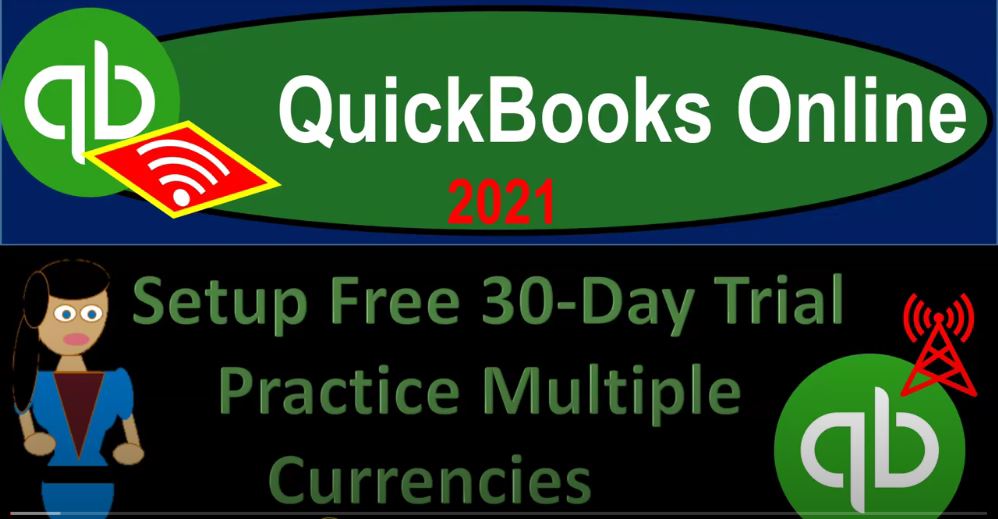 QuickBooks Online 2021 set up a free 30 day trial. So we can practice with multiple currencies related to foreign exchange contracts. Let’s get into it within two, it’s QuickBooks Online 2021. Here we are on the Intuit website into it being the owner of QuickBooks that’s that I in TU it.com intuit.com, we’re thinking to go to the QuickBooks item into an open owning multiple different softwares. We here of course, looking into QuickBooks, I like to go all the way down to the bottom of the webpage, where they’re going to have a list of their products, which has been standard for quite some time here, the top one is the one we want QuickBooks Online.

So you could turn it on, see if it does what you would expect it to be doing. Because once you turn on the multiple currencies, you can’t turn it off again, then once you want to make the purchase, you might then contact Intuit, and they might still give you a discount price. Or you might contact your CPA or QuickBooks professional, who may then be able to provide you a discounted price for the purchase as well. So we’re going to go ahead and turn this on, it gives us that scare thing.

And so we got it now it’s at $70. But in this one’s not green anymore, but that’s the one we want, it doesn’t look fancy green, but we’re still going to click on it and try out the treat the free trial, add the trial, then it’s got the 70 and the 75, we’re going to keep the payroll because it’s just a test period. I don’t believe that. But it says free trial here. So once again, even though it has these dollar amounts, I believe we’re at a free trial, I don’t think that you are required to have your credit card to process forward. So if you don’t give them your credit card, you could you should feel pretty secure.

That’s still a free trial, even though it’s in kind of small print, like under the under the bottom where the numbers really large over here. But I think it’s still free. So we’re gonna go ahead and check it out. So let’s check it out. And then if you do not have an account with them, then you’re going to set up your account here, if you set up an account and you already have one, then it’s probably going to ask you to log in at that point. Or you could just go to the sign in down below here. If you have an account, that is typically going to say, hey, look, one last time, we’d like to issue this discounted price. Or you can continue on with the free trial, which is down here in the button.

That’s not quite as like flashy green. But that’s the one we want continue with the free trial. So make sure you’re if you want the free trial, go in with the free trial options, and then it’ll it should set us up then then we got the questionnaire, we’re going to try to set this up as kind of general as possible. So tell us about your business, everyone needs something a little different from QuickBooks, let’s get to know you to need we can tailor things to fit you, you can change your information at any time in the settings. So we’re gonna we’re just gonna make up a legal name,

I’m gonna call it problem to multiple currencies forward contract, which is a very strange legal name. But you know, that’s what we’re going to be working on here. So industry that we want, we’re going to, I’m going to pick a retail stores. And my only goal there is to make sure that when you set up the chart of accounts, I’d like them to give me accounts that would be geared towards towards tracking inventory, or having inventory in it, like an inventory account and cost of goods sold. So I’m kind of thinking towards what they might be given us for a chart of accounts.

Although the chart of accounts for QuickBooks Online is far less detailed than it would be for the desktop version, if you pick like different industries. So we’re gonna say, and then it says, I’ve been using QuickBooks desktop and want to bring in my data. No, we don’t, we don’t want to do that. So we’re gonna say the next, what would you like to do in QuickBooks? This is just this is just to get you started. So typically, I’ll I’ll take all these items off. I think this is more for QuickBooks informational purposes and won’t have a big impact on our set up, but I just take them off. Anyway. So send and track invoices. Yeah, I want to do that. Organize your expenses.

Yeah. Manage your inventory, possibly track your retail sales. Sure. Track your bills. Yeah, track your sales tax. If I have an issue, your payroll now we don’t have payroll set up if we did, because it’s in the free 30 day trial. But if you don’t have payroll, and you check this off, which I’ll check it off, but you can expect that they might try to sell you the payroll because it’s an add on type of feature and track hours. I probably won’t be using that. But I’ll take it off, you know, and then we’re going to say next. And then it says, what’s your role? And we’re gonna say that we are the owner.

So I’m going to say the owner here. Do you have any accountant or bookkeeper right now? And we’re gonna say, No, we do it ourselves. Great? And will they’re going to be with us every step of the way. So what kind of business is this tell us about your business structure. And we’re gonna say it’s a sole proprietorship, this is basically the legal structure, partnership Corporation not for profit. Obviously, if it’s a not for profit, that will be most significant there because because that means all the accounts might be changed, you know, typically, the terminology of the account will be so such that it will not indicate profits, such as revenue or income accounts or equity type of accounts.

But then you have the partnership in the corporation, which mainly differ in terms of the equity section, partners needing multiple capital accounts for multiple partners, corporations, typically having retained earnings. Now, these three items don’t differ again, as much in the online version, as they do with the desktop version, because we’ll pick sole proprietorship. And I believe they still use the equity account of retained earnings, which is kind of like a corporate name for the equity account. So these might not have as impact as big an impact as you might think on like the chart of accounts.

But you want to pick the right one here, it might have some impact on the chart of accounts. So we’re gonna say next, and how does your business make money. And we could say we sell products do services, or something else, I’m going to say products simply because I would like QuickBooks to set up accounts related to inventory, including inventory and cost of goods sold in the chart of accounts. So I’m going to then say next. And then how do you want to track income expenses.

So we could link our items to the bank accounts right now, I’m not going to do that at this point in time. So we’ll do that later. And if you don’t link them up, meaning the bank feeds and whatnot, link your QuickBooks up to the banks, you don’t really have to do that right when you set up. So you can do that later. And so I’m going to, but we’re not going to be dealing with that right now. But just realize that if you’re setting things up, it’s not required to do it during the setup process. So you got it entering transactions by hand takes longer, but you can always link accounts later. And I’m going to say great, and then it’s going to set up our account for us.

So then we got the high five screen here on the Welcome to QuickBooks, let’s show you around so you can get started, I’m not going to take the tour, I’m just going to close this out. Now what has been set up generally with that setup process will be the chart of accounts down below. So if we go to the accounting down below, and we take a look at the chart of the accounts, we see that this has been set up for us, again, it’s a lot less kind of specific to industry than the than the desktop version. And then if we but it you know, it does a good, good job, they’re a good starting point for us, then, we’re going to set up our multiple currencies.