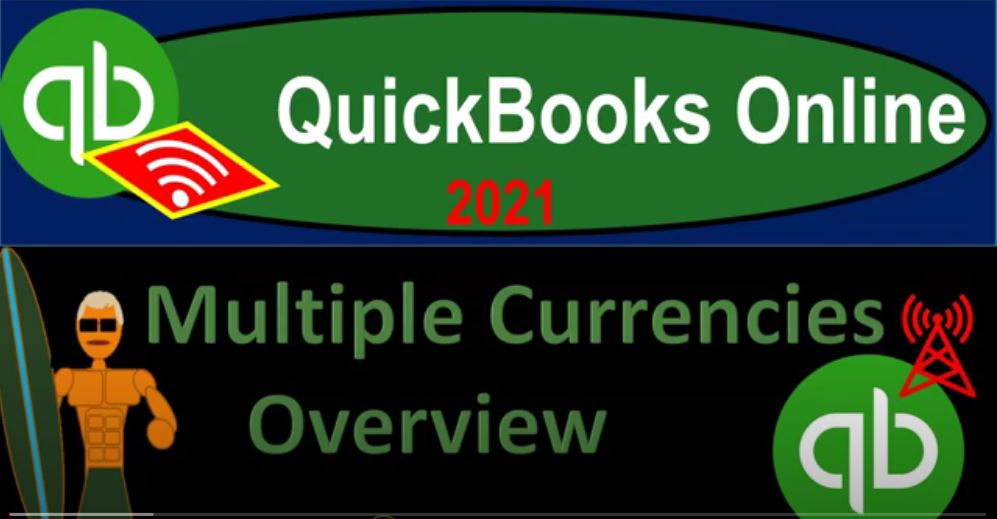 That’s kind of a default if you’re using the US QuickBooks Online, but you do have options to be changing that notice that when we choose this as the home currency, what that means is that your financial statements will be measured in whatever currency that is, in our case, the US dollar. And that means that any other currencies, you might ask, Well, what about these other currencies, which are also measuring tools, what we’re going to be doing is converting, of course, some of the other types of items to US dollar, so our financial statements will be in the home currency.

So if you have another home currency, then it’ll be the same kind of idea that you’ll be looking at, you’ll be measuring your books, we’re always going to be measuring our books with one ruler, one system of measurement, and that’s going to be for us, the US dollar. And then these other things that would be rulers would be units of measure for other currencies or other sets of books, we don’t, we can’t use two different sets of measurements, and therefore we have to do some kind of conversion for them. And we measure them for our financial statements.

Therefore, if I have money that’s being held in a foreign currency other than the home currency, then I’m gonna have to re measure that money not in terms of the ruler of the currency. But in terms of US dollars, if I’m going to get paid in the future for a receivable in some type of foreign currency, I now have an asset on the books, and I have to value it not in the foreign currency that I’m going to be receiving. But I need to revalue it in US dollars. If I’m going to pay somebody in the future and accounts payable in some type of currency other than the currency we measure our books in, we’re then going to have to figure out what the US dollar kind of equivalent of that will be.

So you got to say I understand in order to turn that on, one of the reasons they’re not on by default, you’ll note that of course, once you have currencies in place, when you record a transaction, you can have to add a field in order to determine whether or not you’re what currency you’re going to be in. So it’s going to add a little bit of complication to the to the data input forms, it shouldn’t be too intrusive on the data input forms. In other words, if you turn on multiple currencies, and you don’t use it, because say, for example, you’re always in the US dollar,

then that’ll typically be the default all the time, although you’ll still have to deal with kind of like that data input field where you could change the currency if you had a multiple currency type of transaction. So I’m going to go ahead and save it, we’re going to do it save in it, there’s no going back now we’ve dived in, and then I’m gonna say done, over here, multiple currencies now on. So now if we want to add currencies, we can go to our lists, we should have a like a list type item. Now, this is like a category for QuickBooks that term lists, you know, typically beads things like the chart of accounts and things like our item lists.

And so if I go to the cog up top is where you can go into those lists. I’m going to go and take a look at all lists, I go in this way, or you could straight go into currencies, but you can go to all lists, these are those things that are going to be formatted or the term of list for QuickBooks, which is more of a QuickBooks terminology, that accounting terminology and then we’re going to go down here to the currencies. And there are the currencies. I’m going to close up the hamburger up top by default in the US, if I turn on the US, the US multiple currencies, they typically will add the Canadian dollar and the Euro, obviously, Canada being a neighbor here to the problem, we’re going to be a common

trading partner and the Euro is going to be some of the more common types of currency but of course, we can add any other currency as well or many other currencies and you can look for the currency That you can add by going up top to add currencies. And then you could select the drop down, or sort through the currencies here. So there’s a whole lot of options for adding more currencies. If you wanted to just pick one up and add them, then of course, you can simply just pick that up, I’m going to say, let’s go down here and pick up mexican pesos or other neighbor here, let’s pick that up. So x and just to add one, I’m just gonna add that in.

And so there we have our item on in our our currency list. So obviously, these are going to be the currencies then that we need to be selecting home currency for us being the US dollar. These are the other currencies that we then could be setting up when we have transactions. So now when we enter transactions, what we want to be thinking of, I’m going to open up the hamburger up top, I’m going to go down to the accounting tab. And in future presentations, we’ll set up some of these items that are going to be dealing with currency.

So if I was to basically add a customer, for example, going on over to the customers and say, we’re just going to add a customer, and we’re just going to call the customer, Canada, Canada, one, Canada, one customer, you then have to go back down here and say that you want to make sure that you have the proper currency, which would be in the payment and billing section. And then this customer pays me in US dollars being the default, we can change that to say the Canadian dollar here, so Canadian dollar, and we’ll go ahead and save that. And then when we make an invoice to that customer, it’ll be in Canadian dollars, right.

So now if I was to make an invoice here, and just set that up, I’m going to say now I’m going to say it’s going to, to Canadian, and there and now we get this pop up down below. So you can see the the customers driving the fact that now we have it in Canadian dollars and we have this exchange item that’s going to be showing up that means that if we do any business with Canadian one this customer and they’re gonna pay us in US dollars,