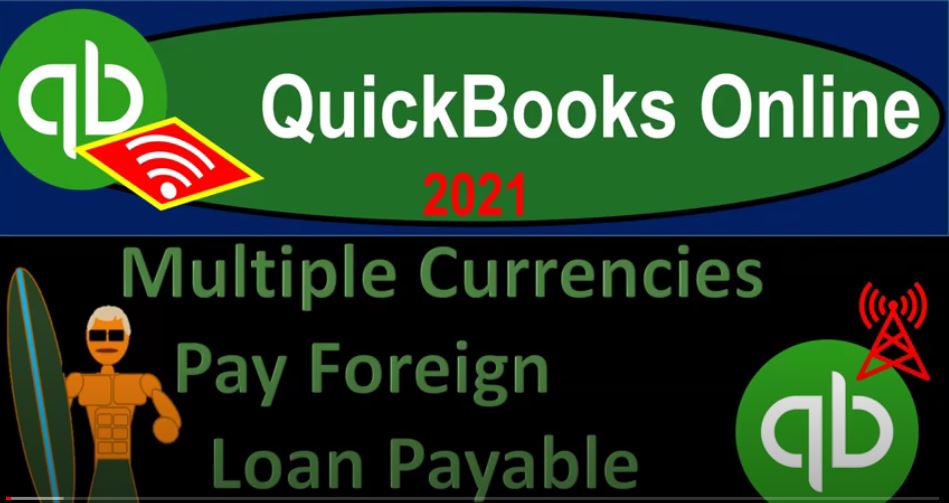 We’re going to now be opening up our financials balance sheet and income statement, go into the tab up top right clicking on it, duplicating that tab, we’re going to duplicate again, right click on the tab up top duplicate. Again. Now we’ll open up then our reports on the left hand side starting with the PnL Profit and Loss income statement, the good old PL report and then do the date range change up top from a one a one to zero to 1231 to zero, running that report, closing the hamburger holding control scrolling up just a bit to get to the one to 5%.

Then we’re going to go to the tab to the left back down to the reports on the left hand bottom side. Opening up now the balance sheet report the good old bs report going up top changing the date range from a one a one to zero to 1231 to zero, running it, closing the burger, and there’s where we are at this point. So in prior presentations, we purchased equipment, we purchased equipment on account basically with a loan, we then set up the other side in a loan payable account as opposed to an accounts payable account, the original transaction being for 41,600 in US dollars,

although we’re paying 400,000 I believe that was a number in yen, then we adjusted it at the end of the period for an adjusting entry. Or you can think of it as an entry necessary in order to get the balance up to where it needs to be at the point in time that we’re going to be paying it off. Now we’re going to be paying off the equivalent of $42,400 in US dollars, the equivalent amount in yen, which at this point will be the 400,000. So if we go back up top, going back to the reports, remember that there is a difference between making this kind of recording if we are using this loan payable account, as opposed to say accounts payable.

If we were using accounts payable. If this account was accounts payable, then we can go I’m going to go to the first tab, go to the plus button. And we can basically use the pay bill type of feature in a similar way as we use the receive payment when we recorded basically the invoice kind of thing. And then QuickBooks would help us to record the amount of it’ll help us to record the transaction for the foreign currency transaction when we record the pay bill.

But that’s not what we did we put it into because it was a loan and the loan account. Therefore, we’re going to be doing this kind of more with a journal entry to put it in place, then the adjustment, and then we’ll do another transaction to make the payments. So that’s going to be more like you would kind of expect in in a journal entry format as we see kind of in the Excel worksheet. We also then transferred money from our checking account in cash to the checking account back to the balance sheet here to the checking account in the foreign currency, in this case, the yen.

So now we have the exact amount of yen we need to pay that is 42,400 representing 400,000 yen that we’re now going to be paying. This is the US dollar equivalent of it, like go back to the Excel worksheet, you can see that same kind of process here in the Excel worksheet, we purchased the equipment, and then we increase the loan payable. So here’s the activity for the loan payable, I’m just going to see if we can see some lines there. So we increase the loan payable, and then we adjusted it to the current value as of the current point in time was an $800 adjustment.

And when we did so we did not readjust the machinery up top note, we recorded the gain or the loss down here to to the down below. Now we’re going to then then we transferred money out of the cash account here into the foreign currency account we did so transferring at the current rate, which was that point 116106. So now we have the exact amount of money yen represented in US dollars to pay off the exact amount down here in the loan payable.

So the journal entry would be straightforward. Now we’re going to then say we’re paying off the accounts payable. And we’re the loan payable and the other side is going to decrease the cash. There we have it and the amount would be equal to we’re paying it remember would be the 400,000 yen. That’s what we’re actually holding in that account. But if we multiply it times the current rate, point 106 it actually is for US dollar equivalent 42,400 that would be the debit and the credit recording this out, then here’s the here’s the loan payable account, double click in here going to the end of it, say plus,

pick up that 42,400 and enter, that brings it back down to zero, we then have the foreign currency units up top, there it is double clicking on that, we’re going to say plus, and pick up the 42, four there, brings it down to zero. So that’s, you know, that’s pretty straightforward. That’s going to be what we’re going to do there, the only kind of complication of thing that’s confusing is that once again, this cash account, although it says, you know, kind of references, the yen here is actually in is, was represented in the US dollar equivalent and this loan amount here, although we’re paying it in yen, 400,000 yen was represented in the US dollar equivalents.

So we’ll change that exchange rate, we’re going to change it to the point 106 for our practice, problem, point 106 point 106. That’s just a practice exchange rate doesn’t represent actual rates, but you can see what’s going on with it, we’re gonna say okay, just for that transaction, we want it and then down here, we’re going to then say that this is going to be the category of loan payable, loan payable, that’s the one we want. And then because we’re in yen, I’m going to put the 400,000, that’s what we’re actually going to be paying in the foreign currency, we’re paying the full amount, the balance that’s in there.

And that’ll give us the 42,400 equivalent amount, which, of course, is the exact amount that we’re tying out to here. That’s the that’s the amount we want. So the journal entry that’s going to happen when we pay the actual 400,000. In game that’s in that checking account, we’re going to reduce the US dollar equivalent that we have properly valued at this point in time for the cash account in yen, which is 42,000, making it go to zero other side then decreasing the accounts payable representing something that we’re going to pay in yen.

But in US dollar equivalents, it’s on the books at the current value at the 42,400. So it should go down to zero to let’s go ahead and save it and close it and then we’ll check it out. saving it closing it, checking it out, back to the balance sheet. Let’s go ahead and refresh this. And now we see that the yen account from the checking account has gone down to zero just as we wanted it to this thing that we wanted to do has now been done. And so that’s back down to zero.

And then if I go back up top, the other side then is down here in the loan payable so it’s back down to zero as well. So it’s back down to zero. So that looks good. And no effect on the income statement for this transaction because we already basically did the adjustment. With the adjusting journal entry last time. Let’s go ahead and open up then the trial balance, check our numbers, I’m going to go to the tab to the right going to hit the hamburger go to the reports down below. we’ll type in the trusty TB trial balance trial balance.