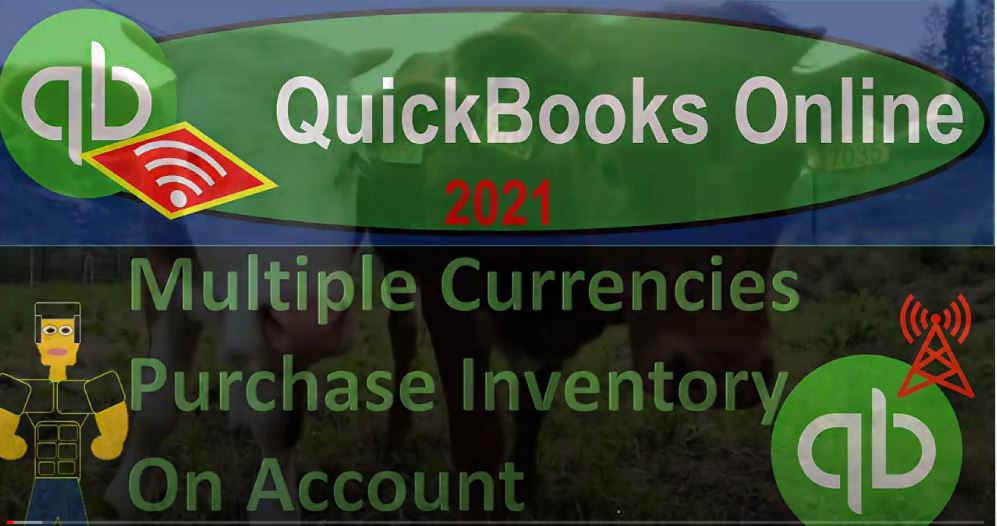 And then we’re going to be paying off the accounts payable on 115, which is going to be after the cutoff date of 1231 that we’ll have to deal with that adjusting entry again. So the transaction normal kind of transaction, if we were dealing with like just dollars here, of course would be to debit the inventory purchase the inventory, inventory goes up, in other words, and then the other side would be to increase the payable account. But this time, we don’t want to just mark off that this is an accounts payable that we will be paying in pounds,

we’ll be paying it off in pounds, although we’re going to be recording it on our but books in the US equivalent as of today’s spot rate, not trying to project out into the future of what the spot rate will be the exchange rate when you know we actually pay the money. But using today’s exchange rate, assuming that that’s the market rate that was taken into consideration when we when we figured this transaction. So the calculation would then be the 20,000 pounds times the the spot rate at this point in time. And this this is not the actual rate at this date.

But it’s just for practice purposes practice problem purposes, we’re going to say that we have one pound is equivalent to 1.6 $5. So that means 20,000 pounds would be 33,000. In US dollars. So we’re measuring inventory that we’re paying for in the future, we haven’t paid it yet, we’re gonna pay in the future 20,000 pounds. And in today’s spot rate exchange rate, that would be 30,030 $3,000. So that’s what we’re going to put the inventory on the books for the other side, then going to the accounts payable.

If we were to record that, then we’re just going to go up top to the inventory inventory, then going up by the $33,000 and the other side, then go into an accounts payable that we are marking off as one that we’re going to be paying in foreign currency. The thing that’s confusing about this is that it it says you know, it’s a it’s an accounts payable that basically marks off that we’re going to pay in foreign currency. However, we’re still valuing it in the US dollar equivalent, because everything on our financial statements is valued in the US dollar equivalent.

That’s our measuring tool. So that’s going to be our process. Let’s go ahead and do that in Excel now. So to do it in Excel, we’re gonna have to set up a new currency because I don’t think we have the pound here yet added. And then we’re gonna have to have an inventory account that we’re going to be setting up and then we’re going to need a vendor in the system because the vendor is what’s going to drive us to know in QuickBooks that it’s a foreign currency transaction, meaning the vendor will be tied out to that currency. So let’s do that. Let’s go back on over and let’s say

So we have that in place now. So now we have that in place, we’re also going to need a vendor, let’s go ahead and add the vendor. So I’m going to say drop down, let’s go to the expense item, you could add the vendor as you enter the bill. But I just want to emphasize that we need a vendor that’s going to be set up for the pound. So I’m going to go over to the vendor section here and close up the hamburger just so we have a little bit more room, we’re going to say new vendor. And I’m going to call this vendor GB p. v for vendor. One.

That’s their name. It’s a strange name, but that’s what their parents gave them for whatever reason, now, it’s I gave him that name, it’s random. So we’re gonna say then pound up here GBP British Pound sterling, that’s the one we want. So we have to assign that to the vendor. When we use accounts payable as the as the account, we’re going to track to the vendors, the one that’s going to drive that. So remember that if we do business with this same vendor, then in some transactions in dollars, then we’ll need another vendor, even though the same company so that we can then set them up as a currency of dollars.

Now I’m going to enter the bill. And I think the bill will actually add the accounts payable account and apply the proper vendor for it. But just to note here, like if I hit the drop down, and go to the accounts payable, it’s a little bit different. Because you might say, hey, accounts payable, I would expect to see that that currency thing here to tell me the currency, but the currency is going to be decided like QuickBooks will set up the account, basically, when when we set up the vendor, so the easiest way to do it is really just to enter the bill with the vendor in a foreign currency I believe. And that’s different than what we had before.

Remember, when we had other current liability and we set up like a loan, then we could set the that that loan to be in US dollars, or basically in foreign currency or something like that. So and that’s a little bit different than the desktop version, I believe as well. So if you’re used to the desktop version, you might be saying, Hey, I should be assigning like an accounts payable account to the foreign currency. But again, I believe if you do it to the vendor, and then we make a bill from it with that vendor, QuickBooks will then create the account in the foreign currency.

So let’s, let’s verify that. So now let’s go ahead and enter the bill. So I’m going to enter a bill, we’re going to go to the drop down, we’re going to say we want to enter a bill. So this is going to be increasing the accounts payable. That’s what bills do. So bills to us are things that are going to increase AP, that’s what a bill basically means we’re going to choose the vendor we just set up which is has that peculiar name of GBP v one. And so when we do that, then it gives us our exchange rate up top. So now our exchange rate has been given to us, we’re then going to say the date of this,

I believe was on 1116, I’m gonna say 1116 to zero, there we have that now this is the exchange rate that that QuickBooks will give us as of that date, I’m going to use a book rate for our practice problems, which we said was 1.65, nice, clean 1.65. That’s not the actual rate, obviously. But it’s our book problem rate, we’re only going to change it for this transaction. So there we have it. Now, if we go down here, we’re going to be adding then the category. Now note that if I was actually adding like an inventory item and wanted to track that within the QuickBooks system,

And then the bill itself will do the conversion for us recording it in our books, not in pounds, but in the US equivalent using the current rate, the current spot rate, the current exchange rate that QuickBooks usually knows in which we basically overrode for our practice problem, that means this being a bill, it’s going to be increasing the accounts payable by the US dollar equivalent 33,000 other side, then go into the inventory for the US dollar equivalent of 33,000, even though we’ll be paying 20,000 pounds, not today, but in the future whenever we pay off this bill.

So let’s go ahead and say save it and save it and close it, save it and close it, pour five or and then we’re going to go then to the next tab over and then run the report, hold down Control, scroll up just a bit. And so now we’re going to go down and say that there it is, see it’s set up that that payable for us, and it has the 33,000 in it. So it’s set up a payable, AP and basically named it with the GBP. Again, that’s kind of deceiving because then you might think that that represents 33,000 pounds, it does not it represents the US dollar equivalent of whatever pounds are there, which we happen to know it’s going to be 20,000 pounds that we’re going to pay in the future that exchange rate, of course will change over time.

And we’ll have to deal with that increase in that change the other side went to the inventory. So inventory up top after 33,000. Let’s take a quick look at our chart of accounts over here Chart of Accounts, and go on down to our accounting Chart of Accounts and just see that accounts payable that was basically set up automatically when we assigned a bill and a vendor to it. So here it is, here it is down here. And, and so it basically made that account for us, I think that’s the easiest way to do it. If I edit that account and take a look at it.

Notice it still doesn’t have any currency kind of application here. For us. It just basically made an accounts payable account with a GBP to it, but I think it’s easiest to let QuickBooks do that automatically by just simply creating a bill. So that’s going to be it let’s go on back over to the trial balance, open up a trial balance, no impact on the income statement. So let’s open a trial balance up on this tab to the right by going to the reports down below. Opening up the good old trusty t b trial balance and date range change up top from we’re going to say a 101 to zero to 1231 to zero,