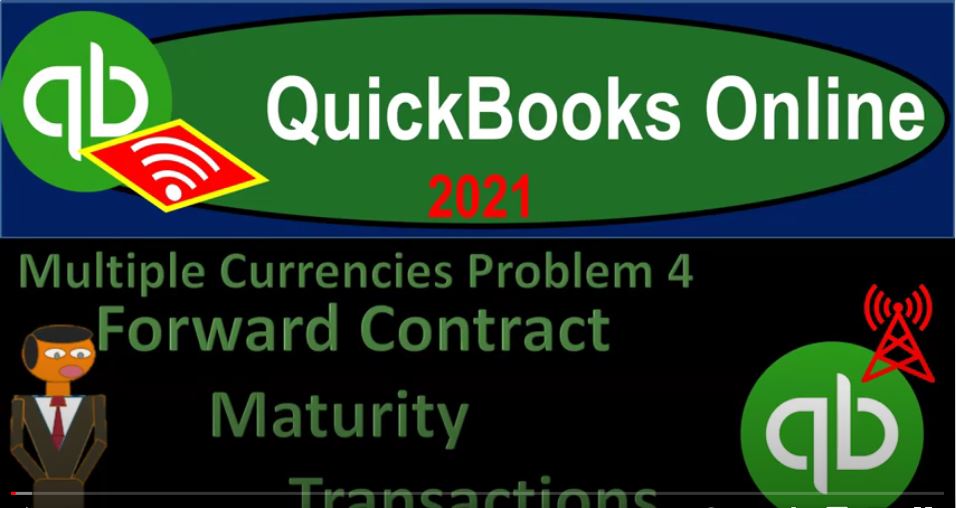 And then we want the good old bs balance sheet this time closing up the hamburger scrolling back up top doing the date range change from a one a one to zero to 1231 to zero and run it. So there’s what we have thus far prior presentations, we set up a purchase of equipment that we’re going to purchase for foreign currency resulting in the foreign currency on the books for the Australian dollars, then we said we were kind of concerned about the risk of the foreign currency exchange rates. So we set up a forward contract which resulted in basically a receivable that we’re going to have in foreign dollars.

But as an other current asset type of account. If it were a receivable type of accounts, then if I go back to the first tab and hit the plus button, we would then set up a receive payment. And QuickBooks would then calculate the difference between the point in time it was on the books to the point in time we took it off as a gain or a loss. But that that is not the way we did it.

We did that in prior presentations to check it out. If we were to do that system, we would basically have to put the first item on as an invoice as we saw the prior presentation, we didn’t do that, we put it on the books as an other current asset type of account. Therefore, QuickBooks is not going to do that kind of kind of adjustment for us at the termination of it. So we’ll simply do it with journal entries. And therefore we probably don’t need the reversing entry, as we would if it was an accounts receivable type account, we could just do it with basically journal entries.

So I’m going to hit the old drop down here, we’re going to do a journal entry. Let’s do a journal entry. And I’m going to hold down Ctrl scroll down just a bit. Now if you wanted to check how much the transaction needs to be, you could then change the item up top and change it to the foreign currency. And then type in here you know 100,000 because that’s the foreign currency units we know we’re dealing with QuickBooks would then give us the proper exchange rate.

Now we’re going to be doing this at because we are using the spot rate this time even though this is the forward contract because it is as of this point in time forward contract becoming do therefore there is no speculative future rate but only the current spot rate as of now. So this is going to be as we’re going to say, Oh 331 to one for that’s what what’s going to be for year two, QuickBooks doesn’t have any rate for that period, because it’s like in the future as of now.

Or, we could basically tell the accounting department Look, I just want you to once it becomes due to enter the transaction using, you know, the current exchange rate, because now we’re at the spot rate, and then maybe we’ll make an adjustment for that $1,000 afterwards. So let’s test that theory out. First, if I go back to the first tab, we can just say, okay, it’s become due at this point in time, we’re going to get the 100,000 foreign currency. So I’m going to put the foreign currency units up there, there’s our exchange rate that we would imagine that would be populated by QuickBooks automatically.

I’m going to type it a UD checking account. And then we’ll save that. So now we have our checking account set up 100,000, we could put a description, but I’m not going to here. And then the other side is going to be reducing the broker receivable, the broker receivable that we had, which was right there. So there we have it, and tab, and there’s the 100,000. And then QuickBooks is going to do the proper calculation of that 60,200. And let’s see what that does when we record it. So if I say save it, and close it, save it and close it, and then go back to the balance sheet and run that report. And let’s run it as of year two. Now, as of year, two 2021. Run it.

So now we’ve got that 1000 that’s left over here, because if I go into the detail, we could see what happened if I go back into 2020 to 2021. That’s right, we put it on the books that that that 60,900, then we adjusted it. And now we’ve got that difference of the 60,200, which is basically the gain or loss that we didn’t adjust for because because all we did was record the transaction for the current time period. So now at the end of the period, or you can think of at this point in time, we can say okay, that $1,000 is obviously the difference between the currency.

And therefore we can make another journal entry to bring this balance down to zero, where we know it has to be at the end of the of this process, and the other side’s going to go to the income statement. So in other words, if I go back to our balance sheet, and let’s take a look at the income statement this time for year two. So Oh 101212 1230 121 run that report. We have nothing in it with relation to the foreign currency exchange, because that $1,000 is going to be the transaction. So we can clearly see that now that the accounts receivable is terminated on the balance sheet, and we still have a balance in it. So now we can do another journal entry to basically close it out.

Again, you might do that in the normal accounting process. Or you might say, hey, just received the 100,000 in foreign currency units, and then we’ll adjust it at the end of the period with an adjusting entry. So I’m going to I’m going to credit this, then I’m going to go back on over and go to our new button journal entry. And this time, I’m just going to keep this in the US dollars as of the same as of the same date here. And then we’re gonna say this is going to be the broker, broker receivable and broker receivable for $1,000.

And then the credit is going to be for that gain exchange gain exchange gain loss account that we’re going to have. And so there we have it, and that should bring the broker account down to zero and record the proper amount of the gain related to it on the on the income statement in the current year. So save it and close it, saving it and closing it and at once a rate the rate shouldn’t matter at this point. So I’m just going to put one for the rate and then save it and go back to the balance sheet. Let’s go ahead and run it hold down Control, scroll up just a bit and I went the wrong way with it.

So sorry about that it went to 2000. I’m going to double click on it. And let’s, let’s see if we can reverse this transaction, I’m going to the $1,000 journal entry, let’s click on the $1,000 journal entry, and we’ll just reverse it, I’m going to be crediting credit the accounts receivable and debit the gain or loss. And that’s what’s nice about this gain or loss being in one account, it’ll flip one way and then the other. So we could just use one account. Let’s save and close it again, and see if we did it right this time. And of course, obviously, we did that on purpose, for demonstration purposes.

So we’re going to go then back to our and there it is. So now it’s been closed out. So that has been closed out. If we then go to the income statement income statement for year two and run that report. Now we’ve got our ar 1000. in year two, which if we go back to the Excel sheet, I believe that that is the correct process, because we’ve got our 1000 in year two, related to that transaction. And then and remember, we got to kind of break out the year one breakout and the year to break out between the gains and the losses. So it looks like that has been done properly. We jump back over to Excel. We’ve basically done this now. And now we’ve done this transaction.

Now the other side of it is going to be the exchange broker transaction with the payable that’s that’s going to be on the books and it’s just in cash. So it’s going to be a straightforward Kip transaction for us to basically pay that off, we’re just going to basically pay it with basically an expense form, or cheque type of form no foreign currency kind of activity on it, because it was on the books as of when we started in US dollars. So then we’re going to we’re going to go back to QuickBooks, if we go to the balance sheet, the balance sheet tab, we’re looking at then this payable down below we’ve got this payable on the books at the broker payable the 60,900.

So we might then choose a payee, which would be the broker, I don’t want to choose one, I might not want to use one that’s going to be in another currency. So I might call it, bro, fight. If I want to pay, I couldn’t leave it blank, but I’m going to say broker, and then US dollar. So I have a vendor that’s going to be in the current units, not a foreign currency. So I’m going to keep it in the current US dollar currency, save it. And the payment account is not going to be coming out of the Australian but the US dollar.

So I’m going to make sure it’s coming out of the correct payment account, it’s going to be at 331 2021. And then we’re going to be paying for the account which I called it What did I call broker, call it broker or something down here, broker, broker payable, US dollar broker payable US dollar for the amount. Once again, that was 60,900 60,900 60,900 fairly straightforward transaction, just decreasing our US dollar checking account other side decreasing the payable, saving it and closing it and then go back then to the balance sheet. I’m gonna refresh it so we’re working with fresh stuff.

Though, if we go back on over to Excel just to kind of check this out. We need to revalue we got this kind of revaluation, which we might do with it with like an adjusting entry process this time since we’re using an accounts payable type of account. And then we’ve got to pay off the foreign currency units. And once that is done, hopefully, then we’re going to have this payable, then going back down to zero and record the effect of the gain or the loss and the currency exchange to the income statement for it.

So that’s where we stand now let’s let’s go back to the second next tab on over no no effect on the income statement here. I’m going to then print out our trial balance we can we can check that out. And so we’re going to go down to our reports down here. Looking for the trusty TB trial balance.

There it is the good old trial balance the balances on trial date range change up top from a 101 to zero to 1231 to zero and two. Let’s make it actually 2000 A 10121 to 1231 to one, run it. And this is where we stand now, this is not going to tie out to the Excel worksheet yet until we do the next transaction which we’ll do next time.