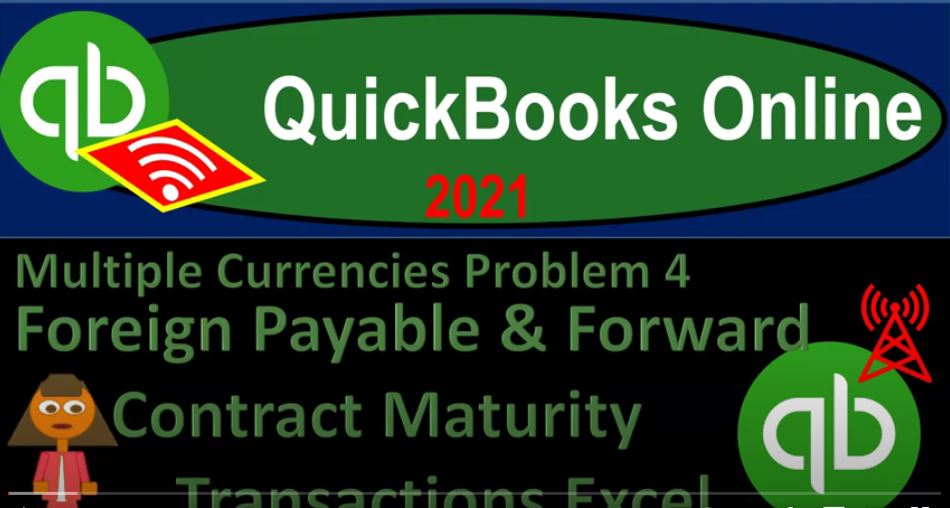 And therefore we ended up with a payable in foreign currency exposing us to exchange risk for the currency exchanges. Therefore, we also set up a forward contract, which resulted in basically a receivable in foreign currency as well. We then did adjusting entries at the end of the time period for both the receivable and the payable. And now we’re thinking about this thing becoming due in the following year first thinking about that in Excel, and then we’ll take that step by step in QuickBooks. So Excel is going to be a little bit more transparent for us to see the transaction.

Now we’re in year two, and we’re saying this thing is going to become due in year two, we’re saying it becomes due on 330 1x two. So now we have to basically revalue our information as of that point in time, and then close this thing out, meaning pay off the payable and receive the receivables and so on and so forth. Now, this might be a little bit different the way you might do it in Excel from QuickBooks, because you might do like reversing entries, for example.

And QuickBooks versus Excel, you might not do that as much, because you’re just going to record the adjustments. So you might think about how are we going to make the differentiation between the accounting department and like the adjusting department easier, which sometimes you might do a little bit differently in QuickBooks, here, we’re going to do the easiest thing from a journal entry type of standpoint. So let’s go back on over to the right, these are Indian balances over here, which is basically going to bring those over to our beginning balances for year two, as we can see here.

So here’s our here’s our beginning balances that are just coming from the ending balances over there. And then the equity section is the whole equity section. So this whole equity section adding up to the 99. Three is our equity section, this being then basically a post closing trial balance, or, you know our beginning trial balance. So now we’re going to have to do some of our our adjustments to get our foreign currency accounts meaning this receivable account and this payable account to where it needs to be as of the current point in time when this thing is ended, which is 331 of the following year, March 31.

And then we’re going to have to to do the rest of the transactions to close this off, including having the dollars that we’re going to need to pay to pay off and and so we’ll get into that let’s first revalue these items. So we’ve got the payable down here, this this this think about the payable first. So the accounts payable, let’s make that green, I’ll make this green because that’s the one we’re working on, that one’s going to be green, and it’s at the 61 and now this payable was not the exchange account. It’s just for this point in time, but either one at this time, we’re gonna have to use the spot rate.

So and that’s because now we’re at the end of the of the time period, there is no forward there is no future speculation right now because it is what it is, as of today, therefore spot rate. So now we’re going to be taking that 100,000 100,000 times the point 602, the spot rate at the end of this whole thing, we’re at the 60,200 60,002. Hundreds what needs to be what is on the books at this point in time is the 61,000. So minus the 61,000, that’s going to give us an $800 difference. $800 difference. And if we consider did it strengthen or weaken when we’re thinking about the this item we have it before it was that one Australian dollars was point six one US dollars.

Now when Australian dollar is point 602, so the Australian dollar can get less US dollars. So it looks like the Australian dollar is weaker at this point in time. And we’re thinking about now a payables The first thing we’re talking about. So this time, that actually worked out in our favor, because we’re going to be paying something in foreign currency that is weaker than it was last time we checked, at least in which was December. So we’re going to have to say, all right, the payable is going to go down with a debit down with a debit, and then the other side is going to be a gain, we’re actually gonna have a gain on this this time.

And let’s do that calculation. Again, I’ll do it a little bit differently. This time, this is going to be equal to I’m going to put brackets, I’m going to take the prior rate, which was this point six, one minus the current rate, minus the current rate, which was point six oh, to close up the brackets times, then the 100,000. Once again, that’s that $800 difference calculated, slightly different way. That’s our debit. That’s our credit, let’s post it out and see what happens over here posting this out, the accounts payable, this is going to be equal to the $800. getting us to that 60,200, which I believe is our what it should be, let’s double check it one more time.

Double check 100,000 times the current spot rate point 602 60,200 checked two times two checks by that thing, there’s two checks by it because we double checked it. And then down here foreign currency transaction is going to be equal to the 800 credit now. So there is that one, and then we’re going to do the other one now. So let’s make this one like yellow. And let’s Kareena fire, the one we’re going to do greens, the one we’re on, green is going on the one that we’re on.

But you could see how they’re kind of equal and up or their opposite but not equal. And the fact that they’re not equal is what we would kind of expect. So let’s do that calculation, we’re gonna have a loss, then up top, last time gain this time loss. And then we’re gonna say that the other side’s gonna go then to this, this foreign currency receivable account. So the foreign currency receivable account, let’s calculate it again. But a different way, this time equals brackets, we’re gonna say this is where we’re where we were last time minus the current rate, point six.

So to close up the brackets times the 100,000. There’s our $1,000 on the debit. And on the credit, let’s go ahead and post this out down below. So we’ve got the income statement where we’re taking the debit of the 100, what the 1000 and then the foreign currency here, we’re gonna say this is going to be equal to the 1000. And that will take us through once again, that 60,200 because everything’s terminated in at this point in time, everything’s going to be lining up to that 60,200 at this point. So now, next thing we could do that is That’s fairly easy.

Now we can kind of close this whole thing out. Next thing we could do is say, well, this payable was in US dollars. So the payable, this was the exchange broker payable, it hasn’t changed since the first point in time we put it on the books, it’s the end of the time period now, so we promised to pay the broker, the 60,900, they’re going to pay us 100,000, Australian dollars now valued at the 60,200. So we can pay this one off, that’s a straightforward transaction, that’s going to be a debit, then to the dollar payable here and a credit simply to cash.

And we’re going to, we’re going to then pay off the same amount, which is just the $60,900, that it hasn’t changed since the beginning. Let’s recalculate it just so you could see where it came from. It was simply the 100,000 times the current spot rate at the beginning when the forward contract was put on the books, because that’s what they thought it would be at that point in time. And the cash and the currency of the US dollar is the side that doesn’t change.

And that’s going to be the debit and the credit. Let’s record this out. So now we’ve got the foreign currency units are going up, because we’re getting actually 100,000 Australian dollars, which is represented on our financial statements that 60,200 and then this receivable right here, which has 60,200 in it is going to go down. So we’re gonna say, plus that 60,200 credit here, this one is going to make it go down to zero.

So now we’ve gotten paid on that on that one. Now, we have 60,200 US dollar equivalents representing the 100,000 foreign currency units, which are actually in the bank account, which we can now use to pay off the accounts payable, which we owe in foreign currency units 100,000 Australian dollars, which once again, we have revalued to the current time period, which is 60,200. So now we can take that 100,000 Australian dollars and pay off and that will be paying off this transaction.

And that’s important to note. And if it was a hedge, that’s where you might see some differences, if you categorize it, it’s something different than you could see. But you could see why someone might say, hey, you should be adjusting, you can argue, from just a theory standpoint, you should be adjusting the depreciation because you didn’t really pay 60,000, you paid, you know, something different based on these foreign exchange rates and whatnot. But that’s not typically what we do. Normally, we just put it on the books at the current exchange rate that we put purchased it for it. And then we recorded the differences in the currencies down here in an a gain and loss as they happened.

Also note that if we net these two out, we’ve got been differences between the gains and losses. That’s what we would expect. If we’re using the the brokerage fund the forward contract as a mitigation tool, we expect them to go opposite ways, although not perfectly opposite in terms of amount, due to the differences in the rates that we’re going to be using those net out to 200. If I look at those netting out to the 200, and these netting out up top, the total difference is the $900.

So so we have to then allocate between year one and year two. So now we’re going to think about doing this in Excel. And we want to think about this and say well, do we want reversing entries to do this? Or do we want to do this with just straight journal entries as we did here? How do we separate between the accounting department and possibly the adjusting department for a little bit of added complexity with it, and so and so we’ll do that in that kind of step by step process.