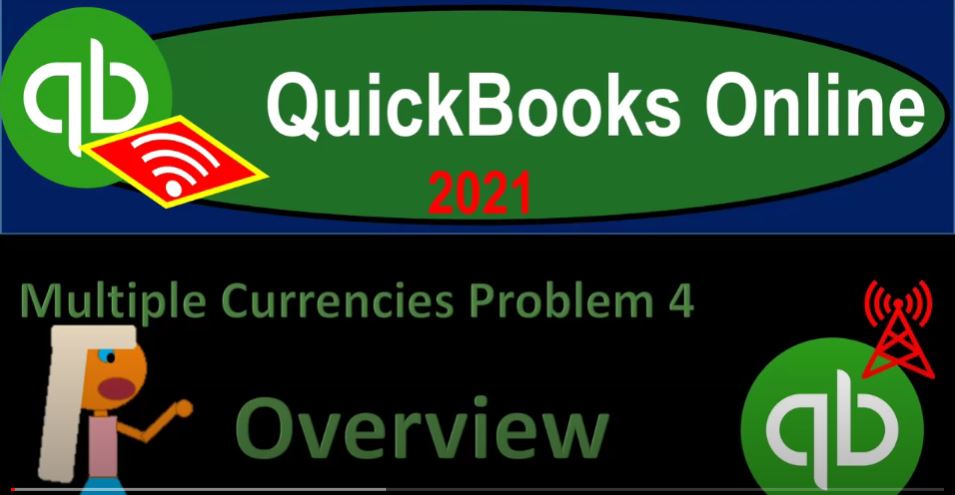 multiple currencies may be right for you, if you have financial transactions in more than one currency, there’s a link here. If you want more advice on that, once you turn on multi currency, you can’t turn it off, you can’t change your home currency, extra fields that columns and more are added to QuickBooks, some features may no longer be available. And we have to click I understand in order to move forward. So once again, that’s going to be important to note, you want to practice with it, make sure it’s going to be useful to you because you can’t turn it back off.

Although once on, it might not be too burdensome, because it’s going to add some more fields to some of your options. So it’ll basically have to label the accounts as what type of currency account that it will be, although some features may not be available with the multi currencies as well. So you want to be careful, make sure it’s what you want to do, we’re going to say, yes, we’ve slept on it, and we’ve thought about it deeply. So we’re going to go say, okay, and turn that on, then I’m going to say done here, done. It has been done, the job has been done, then we’re going to go up top and just check out what happened,

then we’re going to go up top and then go to the lists over here, turn it go to the currencies down below currencies, see what kind of currencies we got, they give us by default, that Canadian dollar and the Euro if we’re talking about the US currency, because I guess those would be the most common people to be trading with given our neighbors and Canadians and whatnot. But any case, if we want to add other currencies, then we can hit the old Add button and select any other currency or many other currencies here.

And if we wanted to delete one of these currencies, like we don’t do business with Canada, or whatever, then we can do that as well. Now let’s go into our practice problem. And we’re going to look at it in Excel. And then we’ll jump back and forth from Excel to QuickBooks as we go Excel being more transparent. As we work through the practice problem, right now we’ll just get an overview of what we’re going to do. And then we’ll do it step by step, journal entry by journal entry. So it looks a little bit overwhelming at first, but again, we’ll take we’ll break it down.

And then note that the forward contract is not designed as a hedge, although it is designed basically to reduce the risk. So if it’s a hedge, you might have slightly different kind of accounting that would take place for it. If you want more information on that, you can take a look at our advanced financial accounting course where we get into this in more detail, and the different kinds of accounting methods you might use if it’s a hedge or not a hedge, and if it’s a you know, so on and so forth. But you get the idea here, last couple, we did some problems before this, where we thought about the forward exchange contract as a speculative tool.

because that’s what the broker is going to be demanding. In order to take this take this on because that’s what the markets is betting or saying that the exchange rate will be in the future when this thing’s going to expire. And then we have now we have two things that we’re going to have to deal with in our prior problems we had, you know, one or the other, we had, basically a transaction resulting in a account, accounts receivable or accounts payable in this case accounts payable. And then we had the foreign exchange contract, that now is going to be having an impact with regards to adjustments for those as well.

So we’ll have to enter the period adjustments for those two foreign currency transactions that are kind of offsetting each other. And then we’ll have to basically say, at the expiration, we’re going to have the expiration which means the foreign exchange contract will then expire receivable payable is going to become due and we’re going to have to pay off then the the payable that was going to be due in the foreign currency. So we will then move on that once again, step by step, process by process, move by move in Excel,

and then we’ll check it out basically, and compare it to what we would do in QuickBooks Excel being more transparent, QuickBooks being making the process easier to do, hopefully, but being a little bit more magical, just kind of you put the stuff in there and then the financials just do what they’re supposed to, but we’ll say why we’ll get into why. So that’s what we’ll do next time.