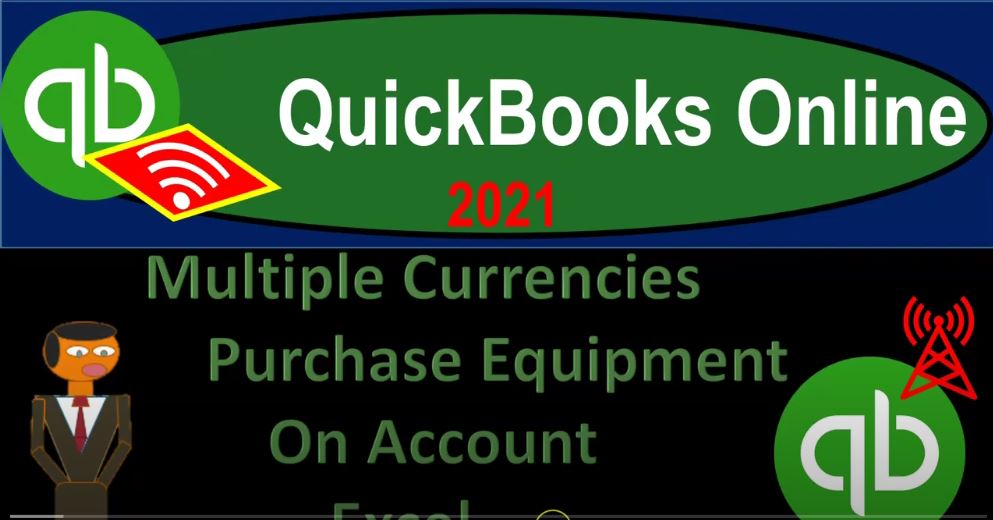 Remember, once turned on, you can’t turn off the multiple currencies, we’re not going to be opening up our financial statements by going to the tab up top and doing some duplicating right clicking on that tab, duplicate that tab, we’re going to do that again, duplicate the duplication by right clicking on the tab and duplicating, we will now be opening up the balance sheet and the income statement otherwise known as the profit and loss, the P and L, we’re going to go down to the reports on the left hand side, let’s start off with the good old P and L report that profit and loss.

Let’s go back up top and we’re going to do a date range change from a one a one to zero to 1231 to zero, run it close in the hamburger holding down control scrolling up just a bit to get to that 125 go into the tab to the left back down to the reports on the left. This time the BLS balance sheet report, which has good information, despite the initials of BS, we’re going to then do the range change up top from a 101 to zero to 1231 to zero, run that report running, and then close up the hamburger.

And this is what we have thus far. So now we’re going to think about the purchase of machinery and equipments, we’re going to be purchasing machinery equipment, we’re going to be purchasing it on account, or in other words, kind of like financing the machinery and equipment, that means we’re gonna have to put it on the books in terms of once again, the US dollar equivalent, even though we’re gonna promise to pay in the future in some currency other than the US dollars, which is our home currency. So let’s think about this first, and Excel will think about it in a transparent way. And then we’ll come back in here and we’ll enter that into the QuickBooks system.

So the scenario is going to be basically on the right here. So we’re looking at this item. So this item, let’s make it green. So that’s the one we’re working on the green one. So we’re saying a US company enters into a contract to purchase machinery from a Japanese company, the cost is going to be 400,000 yen, the machinery is delivered on 830. So we’re gonna record this on our books, then we’re promised we’re going to purchase the equipment, but we’re going to pay in games we’re promising to pay in the future, not in US dollars. But in yen for the purchase of the equipment. Now on seven one, there is a contract to purchase.

such as a loan payable or something like that, if we financed it, so I’m going to be debiting the machinery that’s pretty standard, the credit, then we’re not paying cash, we’re gonna pay, you know, in the future. So that would typically if it was a normal kind of like inventory that we’re going to pay in 30 days or something, we might put it to the accounts payable. And if it was in foreign currency, we might have an accounts payable in the foreign currency. Now note, if it’s machinery, we might think of it more as like a financing type of thing, we might think of it more as like a loan rather than a short term accounts payable.

And it’s interesting to note that because oftentimes, like in the desktop version of QuickBooks, just logistically, when we set up like a foreign currency type of account, we typically need to do it with an accounts payable account. But in the in the quickbooks online version, it looks like you You can basically use a loan account. So let’s just look at that logistically just so we can kind of see the difference over here. If I go back to the first tab, and we go down to the accounting down below.

I’m going to hold CTRL and scroll down just a little bit. Now normally, if I hit the new accounts, let’s just imagine we’re going to make a new account up top the bank account. As you can see, if I was to make basically a new bank account, I have the currency field here. So I can make a bank account in basically different currencies. If I go then to the accounts receivable, it’s kind of funny because we don’t have that currency thing here. But we can still kind of use the foreign currency account not with the fact that we are assigning it to a foreign currency.

But when we when we allocate a customer to it, QuickBooks will basically make an account that’s locked into kind of the foreign currency related to the customer. Now, we’re On the accounts payable side of things, so if I think about accounts payable, same kind of thing, we don’t have a choice to pick a currency here. But when we pick the vendor and assign the vendor to a currency, and then record that with a transaction bill, for example, then the accounts payable related to it will be assigned to that to that currency, QuickBooks will basically assign an account.

Now normally, if I if I went down, that’s a little bit by the way different than the desktop version, which does have a currency that you would typically assigned to the accounts payable and the accounts receivable I believe. And then, if I go to to like another account, like three, I went to like an expense account down here, there’s no expense account, currency allocation for like many of the other types of accounts, the main ones we’re thinking of, is cash, because these deal with cash, right cash in a foreign currency, accounts receivable and accounts payable that will be received or paid in foreign currency.

But then the loan payable is a little bit a little strange to if I went down here to say, long term liability or current liabilities, and I set up it as a loan. And the loan the difference, of course, being with a loan is typically that you have a longer term thing that you’re going to be paying principal and interest on setting it up as a loan as opposed to accounts payable, which would be more of a short term type of thing. So if we’re financing equipment over a long period of time, and paying interest on it, we might then set it up, for example, as a loan, and that does have the capacity here to then assign an account to it a currency type of account.

If I went to the long term liability, instead of like a loan, it does have the capacity here. So in other words, then if we’re purchasing the equipment, if it’s a short term purchase, we might just put it to accounts payable, foreign currency accounts payable. But in QuickBooks, it looks like we do have the option to have like, long term financing a loan, a loan account, rather than accounts payable be set up. So let’s go ahead and just practice that since that’s a little bit different. I’m going to say this is a this is accounts payable, let’s let’s just call it just for names sake, a loan payable, loan payable.

And we’ll just use a different type of account via similar kind of process and kind of a payable account, but we’ll call it loan payable in foreign currency, then the amount that we’re going to be calculating, let’s pull out the trust account, we’re going to be picking up the 400,000 yen. And again, these exchange rates are just made up exchange rates, they may not be anywhere near correct. So we’re 400,000. And we’re going to say that we’re going to pick this date, because this is the spot rate that we actually got the got the inventory, even though we haven’t yet paid for it at that point. And once again, we expect to pay for it in the future.

So you might say, hey, look, why am I using the spot rate? Now? Why don’t I use like a projected what I think it’s going to be when I get paid. And again, the idea here is that we’re going to use the spot the negotiation happened with the current rate, even though we’re not paying right now. And then we’ll make an adjustment for it when we actually pay it in the future for the difference between the exchange rates. So we’re going to take the 400,000 times the current spot rate, which is point 104, meaning for every one yen you can purchase point 104 dollars.

Again, I’m not sure how accurate that is, you know, in terms of current rates, but for practice problems, you get the idea. So that’s going to be the 41,600 in US dollars. So let’s go ahead and do that. Again, I’m going to say this is going to be equal to the 400,000 yen, times the point 104, there is the debit and the credit. So the machinery then if I post this out is going to be going on the books for 41,600. That then is not what we’re paying, we were going to pay in the future 400,000 foreign currency yen,

but the current equivalent value is going to be the 41,600 as of the point in time that we basically got the equipment or made the deal, even though we’re going to be paying for it at some point in the future in the foreign currency. And when we do, there’s going to be a different type of exchange rate. So bottom line is we have to record our books with the measuring tool of cash even though we’re paying in in yen, in this case, another foreign currency. So then the loan payable is going to go down here same kind of thing. I’m going to say this is the loan payable.

Now note that this says right here it’s loan payable in yen, loan payable and yen. So you might think well, that means that this 41,600 means we’re going to pay 41,600 yen because that’s what the name of the account is right? It’s in yen, but no, that means we’re going to be paying in yen, and that the obligation is in yen, but this is in terms of the US equivalent of the yen that we will be paying which is 400,000 yen, which in US equivalent dollars as of the point in time that we make the transaction is 41,600.

So we’re gonna move on over to QuickBooks next time. And and obviously, when we set this up, then it’s a fairly straightforward type of transaction, but we need to set up an account that’s going to be that’s going to be used. And again, our choices when we set up a new account, as to a liability account would be to use the accounts payable account. And if using that we would have signed the vendor that would be driving the accounts payable in the foreign currency or we can take a look at assigning it as a loan payable account and then sign assign the currency account down here. So we will take a look at that more next time.