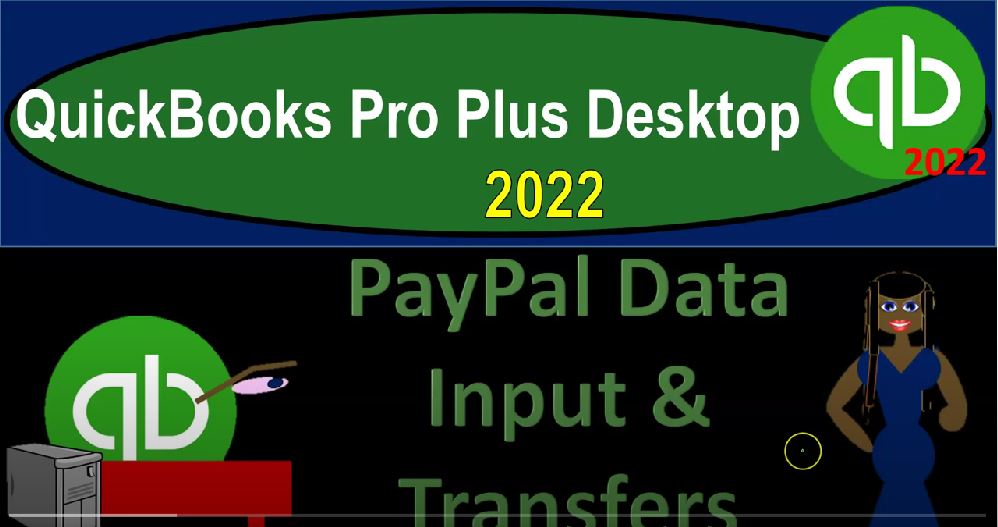 QuickBooks Pro Plus desktop 2020 to PayPal data input and transfers Get ready because we bookkeeping pros are moving up the hill top with QuickBooks Pro Plus desktop 2022. Here we are in our bank feed practice file going through the setup process with the view drop down the open windows list on the left hand side the company drop down home page in the middle maximising at the gray area.

Reports drop down, we go into the company and financial down to that balance sheet standard. We’re going to customize that report up top doing a range change from a 101 to one to 1231 to one fonts and numbers changing the font to 14, we’re going to say OK, and then yes, please. And okay, then reports drop down again,

we’re focusing in on the Pay Pal and prior presentations, we thought about how to get the information from PayPal, noting that we can’t typically link directly to PayPal, at least not at this point in time, we want to download the data.

But in order to download the data, we had to do it in a CSV file. And then we use the converter to convert it into the QuickBooks type of file that we can upload, and then uploaded it in a similar process, as we have seen in prior presentations. So now we’ve got this information. Now I’ve already added the actual data to the system, just because we’ve seen kind of that activity in the past.

So you but just in normal kind of purposes, which you would normally think of as most people would use a PayPal account as kind of an intermediate very possibly to have a collection center for like a website, or to get paid through other kinds of platforms like teaching platforms or things like that.

And then and then transfer that to the checking account. Now, if you don’t have a lot of different teaching platforms that are that are in place, and if you’re not making a lot of payments out of the PayPal account, then if possible that instead of even having the PayPal account, you just might wait till it hits the bank.

So this is going to be saying, well, what if I don’t add PayPal, and I just basically transfer the money over. And when it comes over, for example, I’ll just pick it up over here as income using simply the PayPal function as a collection tool for for online kind of transactions similar to the stripe would be a similar kind of thing as well,

if you’re using any stripe type of service to help you with a collection process to make that secure collection online. And then you transferred over once it hits your checking account, you might record the money at that point in time.

And there’s debate as to as to whether if you’re getting a lot of information from say, a website, or something like that, and you’re selling individual items, how much data do you want to pull in to your to your actual QuickBooks system?

But here, the general idea is the Pay Pal account in particular, you might then use and say well, I’ve got multiple people that pay me. And I also have maybe I’m paying out of the PayPal account using it more as a checking account as opposed to simply a collection of money account.

And that instance you would like to get the PayPal data into the QuickBooks system. And that’s what we did last time and then basically do the bank feed kind of process. So the difference between those two methods just on the revenue side of things is that if I waited for example, before until it hit the checking account before actually Adding it,

So just a quick look of what what that would look like if I open up the caret on the left hand side and go to the profit and loss. Now we can go into things, we added this like teaching platform income. So this is teaching platforms like teachable and Udemy, and whatnot.

And you might have something like this, where you’re getting money from multiple platforms that you can kind of combine into basically one account, same kind of thing we talked about earlier, that you’d kind of like to have an account that wouldn’t be broken out, say, by platform, meaning I’m not going to have an account called Udemy revenue, or Skillshare revenue or something like that, but rather an account. That is just like teaching revenue.

And then I can put this information into it. And then noting that, even though I have one account, notice having one account like teaching platform income, makes it a little bit easier for me to just say, well, maybe I’ll just wait till they clear the bank. And then I’ll and then I’ll record them at that point in time,

since I’m putting them to the same account. But then I wouldn’t have the added detail of the names of who the transactions came from, which may or may not be relevant to your to your bookkeeping system, it’s just another added layer of detail. And if I had expenses that were being paid out of PayPal as well, then I can’t just wait till the transfers come into my account to record it as revenue, because now I’ve got to record the revenue and the expenses for whatever I paid the expenses on.

I would still kind of go to the checking account over here, because I kind of think of it as you know, that’s my main account that I would, you know, be thinking of. So here’s that $5,000. So if I was to go to this item over here and say, Okay, I’m going to enter this into the system and the other side, it’s going to go to the PayPal, and then I’m going to mark it as having been entered in the PayPal side of things.

So on the payee, there’s not really a payee, it’s a transfer. So I’ll just keep that blank. And I’m going to go to the account, I’m going to call this a PayPal account. And there we have it. Now you could memorize this transaction, we might then memorize the the inter the intercompany transactions, but I’m not going to do that because I want to try to do it from the checking account side, and then the PayPal side.

And when we do it on the PayPal bank feed, because it’s already been recorded, we’re not going to record anything new. What we’re basically doing is reconciling at that point, we’re tying what we put in our system on the bank side, and double checking that it cleared on the PayPal side by basically using the bank feeds.

So we’ll go to the bank feeds. I’m going to go to the PayPal then. And so now I could see notice it moved it over from unrecognised to recognize because it’s because it was able to auto match, which it says right here, auto matching clothes on the caret to confirm it. And so now just confirm it. This will not record anything new.

It’ll just confirm that what we recorded has been cleared on the bank basically doing a bank reconciliation type of thing. So that has now been added. Now let’s do it. On the other side of things. We could also do an intercompany transfer on the Pay Pal side so I could do the same thing here. I’m might just say,

So I’m going to say add it, add it there, and there we have it, moved it over to the added item, it’s on 10, seven, opening up the carrot, go into the balance sheet. And then we could say okay, on 10, seven, we had the checking account, checking account for 10. Seven, there it is here, it doesn’t have the little lightning bolt next to it. So we got to mark it as cleared.

When it closes back out, the other side is going to be in the PayPal, the PayPal shouldn’t have the little lightning bolt because we marked it off from the PayPal bank feed for that amount, which is right here.

So there we have it there. And notice this one, the difference between these two, it’s kind of interesting is that we recorded you know this item with a check form here, because the check form is the decrease to the bank account. So when we said the transfer happened from the from the Pay Pal account to the bank account, it recorded it not with a transfer form here it recorded it with with an expense account. And when we did it when we did it the other way.

and it’s recorded with the check form sets in so it’s not a Trent they didn’t use a transfer form kind of interesting, because obviously, we got a deposit and a check form with with the bank feeds, and it could have recorded it with a transfer. Okay, so let’s go back to the bank feeds. Let’s let’s then confirm it, confirm this go into the checking account.

And we’ll say let’s confirm that it moved that one over from Uncategorized to recognize better recognize my transaction. And so now we got auto match, there’s the 15,000, I’m going to confirm it, nothing new is going to happen, it’s just going to put a little lightning bolt next to the 15,000 and say that we’ve matched it out. Let’s do it one more time, the last one is going to be the

Oh, we did no hold on unrecognised, we got one more, let’s do this one on nine, eight. Let’s go to the checking account this time and look for that one. So I’m going to say nine, eight, there it is I’m just going to say the other side is going to pay pal, Pay Pal.

And then I’m going to add this this will increase the checking account most likely with a deposit form this time, and the other side is going to be a decrease to the PayPal. So we’re going to say okay, it’s old, that’s okay. It’s still good.

And then now it’s been moved over to recognized it’s been recognized. And so we got the auto wreck auto match and we can just confirm it that’s not going to record anything new.

It’s just going to put a little lightning bolt next to the PayPal side of it for the inter transfer that’s taking place so now we’ve we’ve taken care of those next time we’re going to we’re going to go back into the checking account here and and dive a little bit deeper into rules and and how rules can be used a little bit more. A little bit more in depth Lee for more complex situations.