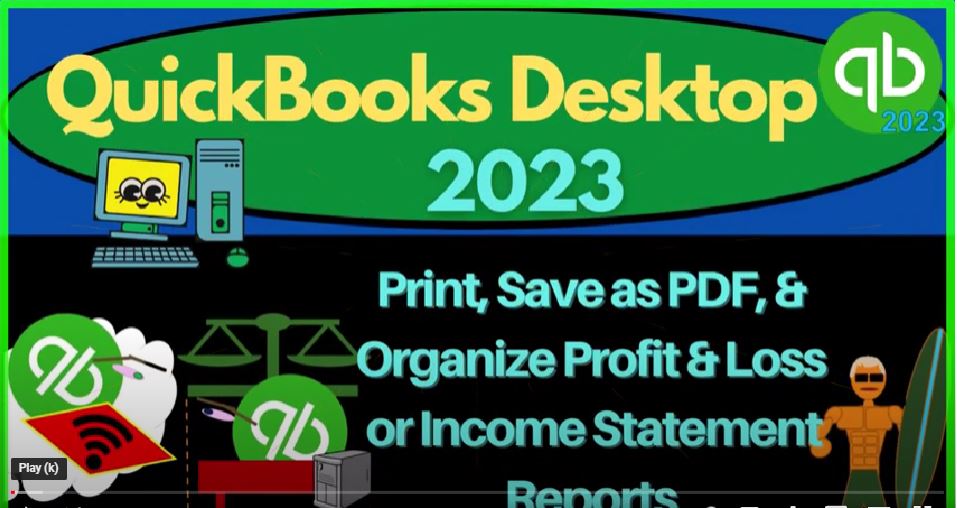 Here we are in QuickBooks Desktop sample Rockcastle construction practice file provided by QuickBooks going through the setup process, maximizing the homepage to the gray area view drop down, noting that we have the hide icon bar and open windows list checked off open windows open.

On the left hand side, we’re not going to be opening up the profit and loss and balance sheet like we normally do, but rather go into the memorized reports which we have set up in a prior presentation.

If you don’t have those memorized reports, that’s okay, you could still follow along, opening up a standard profit and loss for example, and look through the options that we will have to organize the reports, print the reports as a PDF,

save the reports, we are keeping in mind trying to organize this information in such a way that we can provide it to an end user, such as a client or supervisor.

So we’re going to go to the reports drop down, noting that we have the memorized reports that we set up in prior presentations here under our category.

And then we’re going into the memorized Reports tab, there’s the reports that we have memorized under the category of client a month end reports, I’m going to review see them as a list.

Again, if you don’t have these reports, that’s okay, you can kind of follow along and then create your own reports. As we go, we’re focused on the income statement reports. In the prior section of the course we’ve been taking a look at I’m going to minimize QuickBooks, the balance sheet reports.

And last time, we then saved each of the reports this way, we also saved them on one Excel file so we can provide the Excel file, we can give each individual report if we so choose to as an attachment or we can put it in a cloud drive. And then we use the Excel file and a PDF printer to put all the reports on one file.

And then we can zip this folder again and provide both balance sheet and income statement reports. And then in a following presentation, we’ll think about how to export them to excel as well. So let’s go back on over.

So we have then in QuickBooks set up these memorized reports under our category for month end reports, we’ve numbered them put them in order in an attempt to make it as easy as possible at the end of the period to just open them up, change the date range that is necessary, organize them as we so choose to be able to provide them to clients as easily as possible.

And it’s still a little bit limited because you might have to attach multiple files or give multiple emails, when we’re given multiple reports at the end of the month, it might be better to save them as a PDF, put them in a cloud drive, zip them.

So you have one attachment, for example, possibly, or we can make export them to excel, which we’ll do in future presentations, possibly using Excel and acute PDF printer to put them on one PDF file, which we’ll see later, we here are just going to be exporting them or saving them as a PDF. So here we go.

We’re gonna save it. Notice I’m just continuing to put them in my folder here. I’m going to change the name down here. So I like to hover under the name so I can change it nice and easy. This is Report Number seven, I believe.

And notice the numbering is kind of useful if you’re going to provide this to someone in a folder like a zip drive, or a one note drive or even as an attachment.

Because then you can give them a suggestion of the order in which you think they should be opening the reports for example. So then we have an income statement summary. Going to save it. Boom, there it goes.

Now let’s just Open the next one, let’s close this one out. And I’m just gonna go back to My Report Center. Let’s go to number eight. This is the standard income statement. Now with the expanded rows down below. This time, when I save it,

And then I’m going to print it to the cute PDF printer just to demonstrate that you might want to know this option. Because sometimes in QuickBooks, and in other programs, you do not have the capacity to have a print to a PDF kind of option or save as a PDF.

And therefore, you can always use a cute PDF printer to do that, using the printing option not to send it to an actual printer, but to a PDF printer. So it’s just a good thing to know about.

They have some charts, I believe in QuickBooks, where we run into that situation where they don’t have the option of saving it as a PDF for some reason. And you can use the cute PDF printer. So this is the income is it going to the right place?

No, it’s totally not going to the right place. It’s going somewhere weird. Let’s copy the I’m going to copy the destination here. And I’m just going to put that up top, that’s where I want it to go. So there it is, and Manthan reports. There it is. So now I’m going to say this is going to be number seven, income statement standard.

Something like that, we’ll save that one. Okay, I’m going to close this back out. Now just note the variety of reports, we have just on the income statement,

you don’t have to give the same kind of reports on a monthly basis. If you’re a bookkeeper, I’m going to open up number nine now is the one we’re on. But these are just some ideas of all the kinds of variances you can do with just a standard balance sheet and income statement.

We’ll talk about more reports in future presentations, I’m going to send this one out, let’s just do the normal save as a PDF. Again. Now this is a comparative report income statement by quarter. So we’re we got the four quarters and then the total.

So these are options that you can you can do when you’re thinking about should, how should I organize this stuff, when I give it to my client, I want to impress them, but not overwhelm them. Alright, so we’re gonna say this is going to be then number.

This should be number nine, I’ve got to number sevens for some reason. So I’m going to say this is going to be an in comm statement by que te quarter. And so let’s save that one. This is the destination folder where they are going, let’s fix that double number seven,

the income statement standard, I’m going to right click on it and edit that one, edit the name and make that number eight. Number eight. Okay, back on over, closing this back out. So now we are on we did number nine, we’re on number 10. Two more here.

So this is going to be the month by month comparison, December the current last month, and then November and then the change and the percent change.

Once again, you could do a comparison of quarter by quarter comparison, as well. So many options. Let’s go ahead and print this. I’m going to save it as a PDF, I should say.

And we’re going to put our cursor right under this and say this is number 10 I would think income statement statement month comparative. So you might think a little bit more deeply on the on the name on which names would be best. Doing this a little bit quickly. I’m going to close this back out and one more number 11. Number 11.

And this is comparing the current month and the current year to the prior month same month in the prior year. Change of the of the dollars and the percents.

We could do this similar thing with a quarter with a quarter for example, comparing to the prior quarter and so on. Let’s go ahead and save it as a p to the D to the F save and this is going to be number 11 income statement statement stay is meant month, month, comparative prior year so we could probably do better with the name on that but it is what it is.

That’s what we’ll do. So those To our our reports. Now, if we were to organize this to give this to somebody, we can go into all these reports, I should probably move this Excel outside here,

of our reports put the Excel like out here. I can give these to them, one by one. But now of course, if I have the balance sheet and income statement reports, now we’re talking 11 reports,

that’s a lot of attachments, probably going to overwhelm someone, which could actually detract from us, you know, trying to impress them with our the information we’re giving them,

we might then want to zip it. So we could zip the report and then attach it, which could make it a little bit nicer. We could, we could also put it on a cloud drive like a OneDrive,

or Dropbox or something so they can access it that way. That’s nice, but still a little bit of an issue, because you got to go online and download it online. So it’s kind of still a little problematic, or in future presentations, we’ll talk about how to use Excel,

as we did with the balance sheet, we’ll just continue adding more to Excel and then use that to make one PDF with all the reports on it, which can be tedious in its own way as well, because the formatting is a little bit different. And it’s going to be one long report.

But attachment wise, it’s kind of nice, because then you can give someone just one report with all the stuff in it, which can be impressive.

So let’s go ahead and just zip this. So if I zip this, I can right click and say zip, we want to zip this file, compress this file compressed to a zip file. And so there it is, so we had one before, this is the latest one. Let’s delete the last one.

Let’s see it this way. This time. We’ll export all these to excel like we did with the balance sheet reports to the same Excel file we set up and then we’ll use that Excel file to create another PDF with all the reports balance sheet and income statements created thus far.