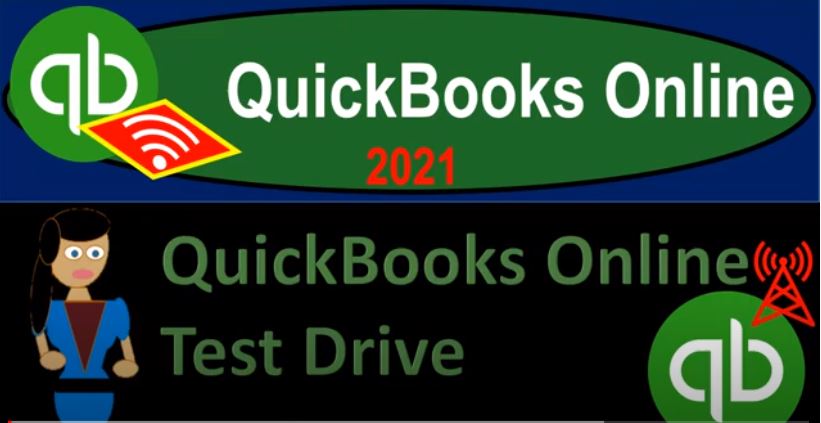 And having a resource or company file that already has data in it is going to be useful for us to do that. In other words, if we set up the 30 day free trial from scratch, when we set up a new company file, that’s great practice to start a new company file and enter data, which we will do in the second half of the course, if you want to jump forward to that component, you can go ahead and do that we’ll go right into making a new company file there. But the first thing to really get under your belt or understand is just the navigation process.

And to do that, we already want to have some data in the company file. Also, by working with this test drive file, we can kind of save some of that 30 day option for the 30 day free trial period that we would recommend taking advantage of, if possible for the second half of the course. So when we get to the second half of the course and we start a new company file from scratch, then you’ll have 30 days to basically complete that section of the course if you’re using a free 30 day trial period in order to work through that practice problem.

So we want to spend the first half of the course doing the navigation without cutting into that 30 day time period, by using the test drive file. Here, we’ll start to continue on this in the following presentations. We’ll also do some comparisons between the desktop version and the online version. And the reason we want to do that is because many times when you talk to different people, they get the two things confused, they hear QuickBooks, and they just assume that you will know QuickBooks on both sides of things.

Or they might be mentioning things that are in the desktop and the online versions. The objective, of course is the same. They’re both bookkeeping systems, but they look a lot different. So it’s kind of nice to be able to see the layout of the two at the online version doesn’t have the mapping, or the flowchart that the desktop version has as well that flowchart for the desktop version might be useful, I think it is useful to just kind of see or visualize the transactions. In other words, the transactions will be grouped by customer, vendor, employee, he and other so but in the flowchart, they’ll actually show you know a flowchart with arrows in it to kind of get used to this, which is good when you’re first starting out.

Also, many people might be moving from the desktop version, which is the older version of the software, meaning it’s still good, it’s still a good software to use, but it’s been around longer. Therefore there might be more people that have an acquaintance with that version of the software. And when they jump over to the QuickBooks Online, it’s kind of a shock. And because it’s a completely different layout on QuickBooks Online. So for that reason, as well, we’ll be doing a little bit of jumping back and forth, which is to see the layout on the QuickBooks desktop version.

And then just find those same kind of areas over here in the quickbooks online version, every time you log out of this version, and log back in, it’s probably going to refresh the data, meaning if we enter transactions, which we may do for test files, we might enter some invoices and some bills and whatnot, they’re not pot and then most likely will not be saved. If you log out and go back in.

That’s okay for the first half of the course. Because our goal isn’t to basically build another set of data files for our goal is just the navigation in the second half of the course, we will have to do things in chronological order, because we’re going to go through the process of entering data from the starting point with a new company file and then enter two months of data, reconcile the bank accounts and do the full process there for the first half of the course. However, when we’re testing an invoice or just looking at something in the customer section, if we make an invoice, we really just want to make it for that particular time period.

If your balance sheet doesn’t tie out exactly to what we Have, that’s okay, because we’re really just looking at the relative issues in terms of how to get to the balance sheet, or what’s the impact going to be with one form or another form. Also note that you can basically do this first half of the course as well with your own company file without messing anything up in it as well, because we’re not focusing in on the data input so much as just the navigation we might do a little bit of data input, just to practice but that’s not really where our focus is.

Our focus is just the navigation of the software to see what different things will do. Jumping back and forth then from these forms that we’re going to be using to enter data into the system and the financial statements primarily being a balance sheet profit and loss or income statement.