So then we’re going to now record the receipt of the inventory last time in month. One we did so by simply paying for it with an electronic transfer with an expense form, basically decreasing the checking account. This time, we’re going to record a bill for it. So that means the bill is going to be saying that we have the inventory inventory is going up. And then the other side is accounts payable because we have not yet paid for it. That means the liability of AP accounts payable goes up.

When you go into it. It’s just going to be a bill the form is just simply called bill. And again, when you see bill, you your mind just goes oh that means accounts payable is going up, accounts payable is going up. Alright, so we’re going to enter the bill for the vendor that we created. Last time it was the new vendor cold fender. So I’m going to type in Fender here fender. Our vendor, that’s who we bought the guitar from and has now appeared when I do so they get this little pop up on the side says, Hey, there was a purchase order for Fender I’m paraphrasing here of 1003. And here’s the amount you can open it or simply add it, and that’s, that’s the one we want. So I’m simply going to add it.

So I’m going to say add that please. And so we’re going to add that information, it has been done. And then if I scroll down, we’re going to put this on the books at 214. So I’m going to say this is to 14, I’m just going to click a plus button till I get up to the 14. Like so, terms, let’s just go ahead and put the terms here for our new vendor vendor and put that on the net 30. We’re not going to be in the category up top, that’s where we would be selecting an expense account. But we don’t want to just simply select an expense account, or even an asset account what you could do there I could select inventory, but we don’t want to do that because we want to put the item to track Not only the, the account that’s affected inventory, but also the subcategory to track that inventory the product.

So we want our sub reports to be able to tie out. Therefore, we’re going to use the deep item detail, which has already been populated for us through the link that it had to the purchase order. So we’ll just review the data here. We’re going to say Yeah, we got a Squire the Squires what we got that looks good. We’re tying out basically the bill that we got and the actual unit of inventory with a purchase order that we sent out prior one quantity, the rate looks good, that’s the same, that’s what we want. And the customer that we’re going to send it to now that we have it in our hands, we’re going to call up that music store stuff and invoice them for that

to help us in that process. I’m going to make this item billable. So I’m going to say it’s billable here and that means when I create an invoice for the customer, which is what I’m going to do next, I’m going to turn around and create an invoice for this new music stuff. Then, then it will populate it for us. It’s not perfect. It’ll populate the cost and we We need to change it to the to the retail price, but it will populate that in and I just want to show how this would work as well, because that billable item can be used for other types of things as well. Anytime you’re paying for something that you want to basically include as part of the cost of the invoice, you can use kind of that same billable option to do so.

So what is this going to do now when we record it, it’s going to be increasing the AP accounts payable for that 168. And it’s going to be also increasing inventory because that’s what we got for the 168. It’ll also affect the sub accounts for who we owe vendor, which is supports the accounts payable and the inventory account that supports the inventory. Let’s check it out. Let’s go to save and close. And let’s open up our reports then. So this is kind of a fairly new thing. So let’s open up our three reports and review it in them. 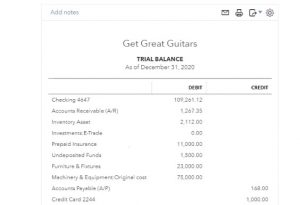 So I’m going to close that back out, going to go back up top and back to our TV, the other side then not go into not going to an income statement account but to an asset account. So here’s the asset accounts, selecting the assets accounts. If we scroll them down, we see there’s our bill for Fender For the asset account, so there it is that increases. And if I go back up top also note, of course, that the supporting document report would track this item for the inventory as well. That’s why we can’t just use the account, because we also need to know which item was was purchased.

So QuickBooks can can track the actual inventory item. So the inventory item would be on the inventory report. I won’t check that this time. Note, if I go to the balance sheet, those two accounts, of course are on the balance sheet, we have the accounts payable going up, and the other side being the inventory, the inventory going up. And there’s no effect then on the profit and loss at this time. Why? Because we haven’t yet used the guitar in order to help us generate revenue we have an asset of a guitar instead. Alright, let’s go back to the first tab. We’re going to be doing this again. We’re going to go back to New or on the first tab. I’m going to go to new I’m going to enter another bill

This time for Epiphone. So this is the other purchase order we had outstanding. We received the guitars for Epiphone. Now, you could select the drop down and find that vendor, I could just type in also Epiphone, and pick up that vendor, we should then get a pop up after I select tab for the purchase order related to them, and there it is. Now, note, it didn’t do it before because I was zoomed in. So anytime you’re like zoomed in over 100%. And if you work with the forms, QuickBooks will kind of get funny sometimes and do some funny things.

So I logged back out when that happens, I went back into the bill, and then I and then I went back to 100%. Okay, same process here. And we’re just going to simply add the purchase order. So we’re going to populate this with the purchase order. So we’re going to add the purchase order here. Looks looks like it did what we wanted. And then we got the date at the February or March, February 14. We’re going to say it’s gonna be net 30s. The terms of a due date is going to be 30 days later, and then once again, we’re not in The categories because we don’t want to just assign an account only, we want to assign an item, which will have the account inventory as well as the supporting documentation.

So it’s going to be an Epiphone, we got three of those at $400 for 1200. What’s this going to do when we record it, the bill means accounts payable will go up to AP will go up, and inventory will go up by about 1200. Let’s check it out. We’re going to say Save and Close. Let’s check this one out using our standard forms using the balance sheet. So let’s go to the balance sheet first. I’m holding down control and scrolling up to let’s say 125. And then I’m going to go into the accounts payable. Let’s go to their accounts payable. It hasn’t refreshed, but I’m going to zoom into it and I think it’ll refresh when I go in there. And so there it is, and if we go to the right, then we see the Epiphone there’s that 12,200 so that looks good, going back up top, then the other side should be in inventory.

So if we go back into the inventory, so that’s going to be up in the asset section. So we’re up in the asset section, because that’s where it’s going to be. And we go into inventory, scrolling back down, and we see the bill for Epiphone there as well. So that looks good. Scrolling back up, let’s just take a look at the supporting reports. Now, if I go back to the first page, I’m going to go down to the reports. And I’m going to hold down Control and scroll out a little bit, back down to 100. So we’re in favorite reports, business overview who owes you sales customers, what you owe. 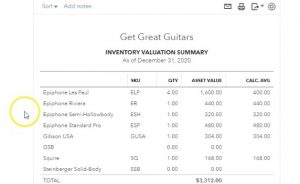 So here’s our inventory valuation. Here’s our new Squire that we got down here. Here’s our four Epiphone that we got if we were to select that item, then we would get the detail for it. And here’s the purchase order where we purchased those last four. Going back up top back to our report. And then we see the bottom line of this report being the 3312. That should be supporting the balance sheet. So if I go back to the balance sheet and see if that is indeed the case, I’m hoping it is I’m pretty sure it will be there’s the 3312 it is it is indeed the case.