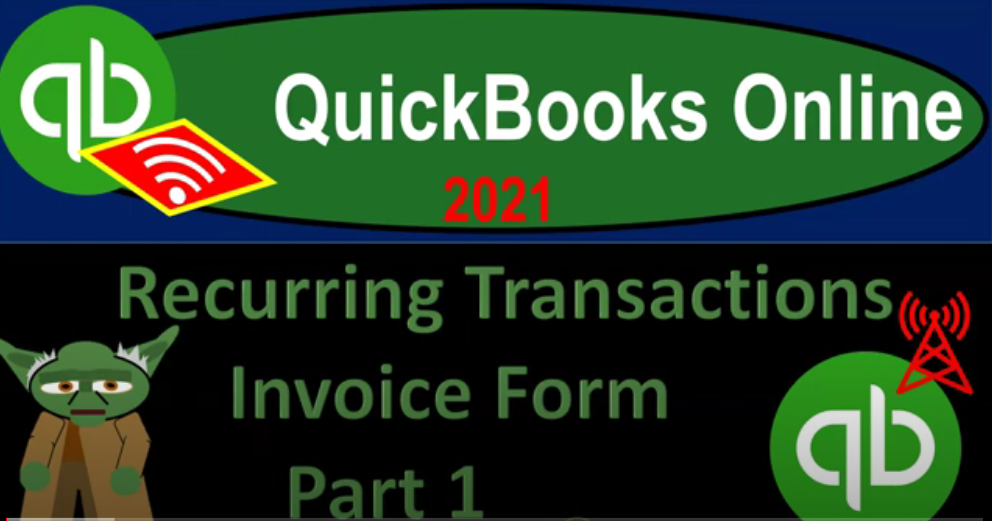 But we might want to save the template of the invoice so that we can create it more easily without having to add a bunch of items into it. So obviously, when we create the invoice, it’s going to be increasing the accounts receivable other side then going to sales, then of course, we’re going to have to be receiving the payment, we’ll be collecting the payment on it, we might be receiving payment directly from the customer, in which case we can match it out to the invoice given us a verification of the transaction that we put in place. Or we might have the bank feeds, meaning customer pays us automatically or something like that.

And then we can have the bank feeds that will tie in which will basically record the receipt payment for us as we match up the bank feeds to the endpoint invoice once again, giving us that kind of double verification. Also note that like with the expense forms and the bill forms, we can set up the invoice as something that will be automatically input so that we don’t have a reminder or have a reminder, or simply put in a template that can be used periodically whenever we need to. So let’s go on back on over to our forums and let’s enter a few of these, we’re going to hit the plus button up top, we’re going to then go into the customer and invoice so I’m going to set up another invoice here.

So this is obviously a fairly basic kind of invoice, which would simply be increased in the accounts receivable by the 400 increase in sales by the 400. And of course, increasing the sub ledger by customer for customer to buy the 400. So if I was to memorize this, once again, our options then to memorize this as something that will be reoccurring and automatically recorded, or something that would be reoccurring and not automatically recorded, be a reminder that we would then have to then create or double check before we record it, or we can create it as something that is a template.

So you can imagine if we had a complex invoice with many more line items down here, we can save it as a template and say this is a standard template type of invoice. I don’t know how often it’s going to reoccur. But whenever we need that standard template, it might be useful for us to create it once and then go back into it and pick it up from the template forms as we go forward. So let’s go ahead and make this reoccurring. And check it out. So we’re going to go to the customer to we’re going to schedule this one to the reminder. So I’m going to start with a reminder meaning it’s not going to automatically record it.

It’s going to remind me periodically to record it and then we’ll double check it and record it. As opposed to, of course, here’s where you select either scheduled automatically recording, or unscheduled, which you might use as simply a template to not actually record or remind you anytime, but could be useful for that template format. I’m going to say one day here, customer, and email if applicable, obviously, you want the email information here, options automatically send the email or print later or include unbilled charges.

So that’s going to be your options if you were to be sending them out. And then you got the online payments, the credit cards and the bank transfers. So then we’ve got the interval, possibly this will probably be monthly or maybe weekly, or something like that. I’m going to do it daily, just so we can see it shortly. And we could see it, I’ll come back into this in a day or so and check it out. So then we’re going to say I want this to happen, I’m going to say oh 220 to one, that’s the current date. So I can come back in and check it out shortly.

we’re going to be opening up the balance sheet and the income statement, otherwise known as the PnL, the profit and loss, we’ll do that going down to the reports on the left hand side the reports on the left hand side, we’ll start off with the P and the L, the P and the L report. And I’m going to scroll up top, I think that date range should work. Let’s bring it back actually to the prior year to see if that prior transaction was recorded. So Oh 10120 1231 to zero and run it. So notice nothing has an income here because we didn’t record a transaction for that for that transaction, we just memorized it to record it in the future, or remind us to do so.

Next tab on over, let’s go back down to the reports open up the BS balance sheet report. And that’s going to be right here. That’s that one. And I’m going to go back up top and close up the hamburger. Let’s go back to the first tab then now we are in our memorized transactions or our record recurring transactions, I’m going to go to the cog up top you can get here by going to the cog, and then go into the recurring transactions. And we of course have a lot going on,

I’m going to close the hamburger because we entered bills last time and then checks. Here’s our new one. Here’s the invoice. If you have a lot of things going on here, you can then filter by filter up top, I can filter by it being scheduled reminder unscheduled hours with a reminder, meaning it’s not going to record it automatically. We can also filter by type, which in this case would be an invoice but I’m not going to do that here. I’m going to close this and just simply apply it. So now we have the bills and the expenses. And then here is our invoice, we can sort out if we wanted to in this format by looking at it by say type.

So there’s our invoice now on top here, and we could sort by any of these other items as well. This is a reminder. So once the time period has passed in a day, we might come back into it in a day, it should show up in our reminders list over here. And we’ll have an item hopefully in our reminders list, we might come back into here and check it out in a future presentation. Back to the recurring transactions. Now we didn’t record an invoice we just saved it as a recurring transaction. If you want to record the invoice as of you know the prior year, we can then say I want to then use this I’m gonna hit the drop down and say use it.

And that’ll basically pull up you know the form that we had entered. Here’s the form here it is at the date of 1231 2020. I’m going to go ahead and then save and send or save and close this item. Now I’ve recorded the transaction as of the date I wanted to record it in, it’s still here as a reminder item that will be reported again in a day which will check out in in a day hopefully, possibly most likely. And then I can go back on over to my to my reports profit and loss, run it and there is our invoice that has been recorded for the first time and then we got to go back in and record the reoccurring transaction once the time has passed.

Now let’s record another one that will record automatically so I’m going to go to the drop down we’ll say another invoice here. Let’s do another one. Just like the other one. And we’re going to say this is going to be customer won’t be just like the other one, though. Some kind of song. So customer three. And we’re gonna save that. And so there we have it, and then we’re gonna we’re gonna go down here this is going to be item. I’ll say item two again.

And we’ll say then there’s five of these quantity five at 100. So there we have it. So standard invoice, it’s going to be increased in the account. Accounts Receivable by by the 500, other side go into sales, then we want to make it a reoccurring transaction, this one recording automatically, we’re automatically going to send them out, possibly emailing them automatically every month so that we don’t even have to look at it, we can just send those out.

And then of course, we can track them as they go through the accounts receivable, sorting them in the accounts receivable at that point in time, so I’m gonna say, Make reoccurring, and it’s gonna be scheduled. So this time, I’m gonna say just schedule it, just do it don’t even don’t even like ask me about it, I don’t even want to know just, and then who’s going to have the email, then of course, we can have the email and you might have it automatically send the email, for example, online payment options possible as well, you could do it on a monthly basis,

I’m going to do it basically on daily again, just so we could check it out in a day and see what happened. Oh, 222 one, there we have it. That’s the current day. And then there is our customer, everything else looks good. If I record this down below, again, it’s not recording anything at this point, that’s probably not the right term I should be using, we’re going to save the template not record anything. If I want to record it, we can then go back into the template and create it again, and record the current item with it. So I’m going to save it as a template and say save it, please. And then something’s wrong, though. So it doesn’t like of course, the email address,

I don’t have one and I told it to automatically send an email, it won’t let me do that I put in a fake email. Let’s see if it will allow me to do that. And it picks that up. Alright, so it’s happy with that. So now, if we go back on over to the first tab, and we take a look at our reminders, hitting the drop down, go into the tools once again and going to the lists, I’m sorry, lists and recurring transactions, I’m going to close the filter by hitting this x. So now the filter is removed.

Here’s all the stuff we have. I’ve sorted it by type. So here’s our two invoices, here’s all the bills, we could then of course sorted if we wanted to hit in the sorting option here, we could sort it by this time the items that were scheduled, if I hit the scheduled items, these are all the scheduled items. Now, one being an invoice, meaning it’s not going to be up in the reminders list. At any point, it’s just going to be scheduled and recorded. And then we’re going to have to basically track it in the receivables. Or you can hit the drop down and sort it by not scheduled but rather by invoice. Now, because we have two invoices, let’s do that sorting it here.