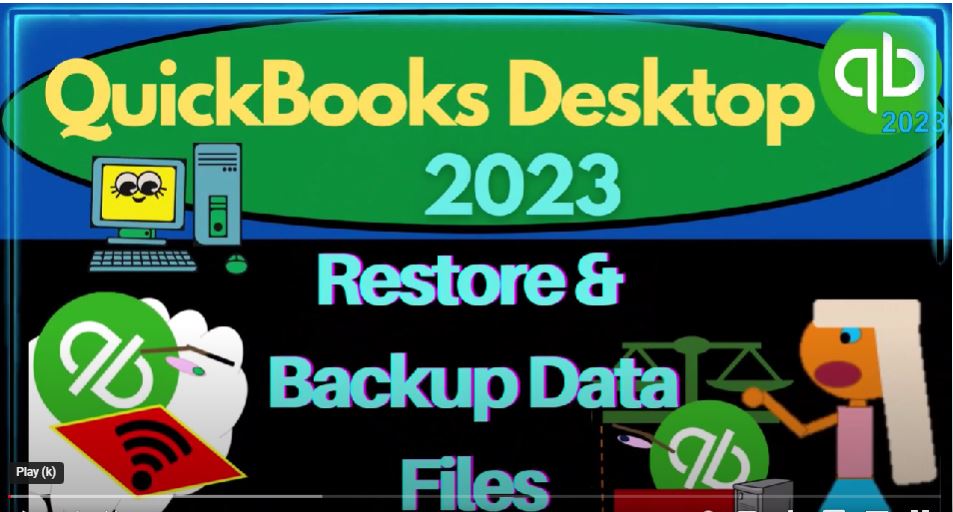 If you work the problem from start to finish, you shouldn’t need to restore any backup files in order to go through that process. However, if you want to jump forward in the practice problem, or if there was an error in the data input,

and we’re going to try to be able to provide those backup files for you to do so. So first, we want to get an idea here of the QuickBooks actual software icon, the data files, and then the backup files.

Now, I’ve already opened up the sample file, which is provided by Intuit, the owner of QuickBooks, and this is the actual data file. So then there’s going to be a backup file,

If you don’t have the sample file already set up, then you can download the sample file. So if it opens up to a company file, and you want to go back to the prior screen, you can go to the File tab.

And you can say I’m not going to exit the entire thing here, but instead just close the company. And that will once again take you back to this intro type of file. Now, in order to get the files that are provided by Intuit, you hit the drop down here,

but it’ll generally give you the whole actual file for that practice problem, which is going to be this this sample file. So if you open that up, then that represents for us here, the data file.

So you want to make sure that when you open up the data file, you put it into its own folder, also realize that sometimes, as we’ll see, when we create a new company file,

So that you can go in there and find it. If there’s a problem, you got to organize these data files. Even if you only have one data file, you still want to know where the data file is.

Because if you’re just working on one company file, you might just have one, but and then you’re also going to want to know where the backup files are. If you’re a bookkeeper, you might have multiple data files for multiple companies. And you want to make sure that you’re organizing each data file into its own folder typically,

So let’s open this one up and just do another backup. We’ve seen this in a prior presentation, I believe. But we’ll just recap this backup process. So that you can you can get a handle on organizing your backup files.

So then we’re going to go up top, I’m going to go and say once I enter the data, which might happen at every night, for example, we might do this on a on a weekly basis. But generally every time you enter new data into the system, you’re going to want to backup your data.

You might use backup data that we provide you restoring the backup data, which can give you a nice practice file to be working with. And that’s another reason you might have the backup files. You might be backing up the backups in order to test something knew, try to enter in a journal entry that you’re not sure of.

And then test it out. If you don’t like it, restore the backup file, right So, so we can hit the drop down and we can say backup, create a local backup, I’m going to make a local backup, you could set up online backups as well,

So I’m going to say Save. And that should save the backup. Now it takes a little while to back it up depending on how much data is in the system. But it shouldn’t take too long. It’s a pretty straightforward standard process.

So as you can see here, the backup file in this case, is right here, it looks like this, it’s a backup file. If you right click on it, and you look at the properties of it,

And so And notice that if you’re working a practice problem, if I provide you with the data files and you want to rework them, then you’re gonna have to download the data file.

And this would only happen if like, if you wanted to jump forward in the practice problem or something like that,

So you want to find the number of the file to the one before the problem you’re working on. Because that will be the backup file through that particular section.

So if you find the one before that, you should have the data file up until or completed until the new thing that you’re going to do in that particular section. So then you’re gonna have to download the backup file.

which again, you can see gets kind of complex because it’s got all this other junk that’s going to come along with it. So to see that I’m going to restore this backup file now. So now I’m going to go back into here, I could restore it, even though I’m in a company file,

I could go to the File drop down and say that I want to restore a company file. Or if I don’t like doing that, when I’m already in a company file,

I could say I want to close the company file that will take me back into this, this intro screen, I could use the open or restore here, I tend to like using the drop down.

it’s going to create another file from the backup file. And then and then make another data file with it. So where do I want to put it now? Where do I want the file to go?

It’s gonna go into the QuickBooks I want to put it into the data file and that I made that New Folder data file to that’s where it’s gonna go. You might want to change the name of it down here. So

it’s sample Business or whatever, number two, or something like that. So I can see the difference, it’s going to restore as a QB W, because it’s restoring the backup file the zipped file, to a data file, a right file, a QB W file, the QB W file will be in this location.

Okay, save it, it could take a little while to restore. But it’s once you do this a few times, it’s a pretty standard process, QuickBooks is quite, you know, it’s a pretty, quite good process, you can be good and confident that the backups will work generally. So now we’ve restored another company file.

So now I’ve got two files that have the same company file, I don’t want to get the two mixed up, I gotta make sure we’re where’s the company file that I’m working on.

So this is the pros and cons of using the desktop version, the capacity for you to have multiple files. So you could do things like testing them out, and make a backup file, then test something out, jump forward into practice problems.

The cons, of course, then are that of course, you’ve got to organize the files to make sure that you’re using the one that you need to use just like organizing Word documents and anything else.

which we put in here, I’m going to show it this way. Notice, it just gave me all this other junk, too. So if you have multiple data files going into one folder,

it’s not the end of the world, but just go to that folder is going to be kind of ugly, because you’re gonna have all this junk in it in each folder. So I kind of like if I can do so having a different folder for each data file.

So I can see all the junk from one file at one place. But whatever the data file is right there, if I had this data file in with this data file, as long as I named it something different, so that I can distinguish the two data files here, that would be fine. And you’d have all this other junk that was saved with it, as well.

But with with a QuickBooks file, we want to when we’re saving the file to another location, we want to have a zipped file, which is going to save some space. So we had then our zipped file that that we created for our backup file.

And then if I need to restore that, which you wouldn’t always need to restore it. And remember, if you’re saving your zipped file, for purposes of not wanting to lose the data,

you want to have it on another drive than the drive we’re out here. That’s not our major goal for this presentation, we want to show how to restore and open it, but you would want it on an external drive or on the Cloud Drive.

But then once you have the backup files, you can save multiple backup files to one folder, typically they’re going to be time stamped, and so on. So that you can distinguish, which is the latest one, if you were to restore that backup file, then that backup file will still be here. And you’ll create a new data file.

And then as you create a new data file, you want to make sure that you’re organized in terms of where the data file is going to go. And so that that organization, which file in my end, not cluttering up your whole computer,

and so on without a bunch of data files and making sure you’re working in the proper data file. It’s just just organization just like a file cabinet that you got to kind of take keep aware of just like you were would with like Word documents. So that’s the general process in the context of the course.

Once again, you shouldn’t need a lot of the backup file holes because if you work the problem from start to finish, but we’re going to try to provide them for key points in the problem to help you move forward or jump forward if you want and work through a particular point or rework something. If there was a problem or if you just want to go back and do something, again