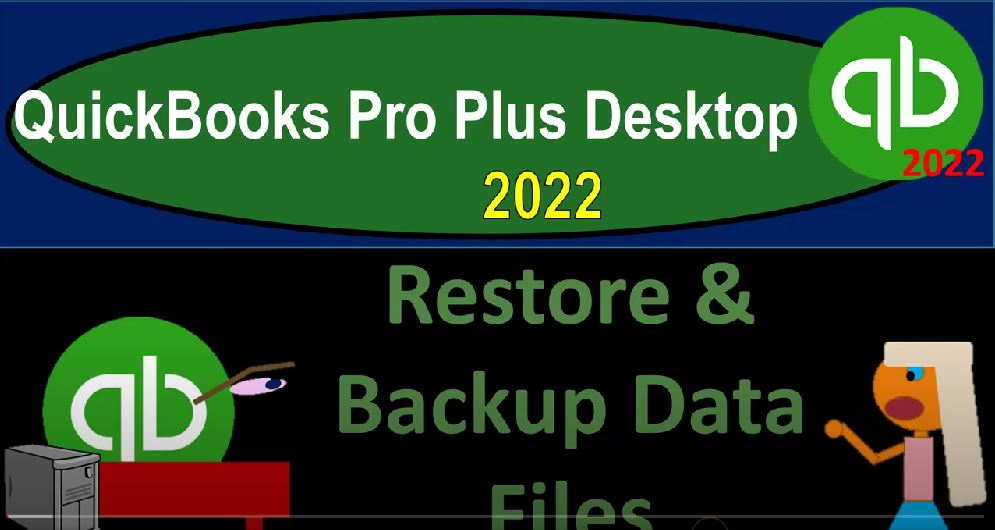 QuickBooks Pro Plus desktop 2020 to restore and backup data files get ready because we bookkeeping pros are moving up the hilltop with QuickBooks Pro Plus desktop 2022. We will be starting a new company file and practice data input from the start from nothing in this section However, before we do so we want to take a look at the sample file and practice the backup process. The restoration process practice being able to see what the actual software icon is versus the backup files versus the actual file that we’ll be using the data file as we enter data into the system.

We’re opening up a sample file. So I’m going to say OK, and then it opens up the sample Larry landscaping and garden supply up top. So that looks good. Let’s see, we’re actually stored it on our folder on the desktop where we stored this file, minimizing the company file in QuickBooks, we then see that if I go into my folder with the data files, double clicking on it, there is our data file, I’ll make it a little bit larger icon. So it looks like this.

But for practice purposes, we’re going to put it on our hard drive which you might use for some reasons, such as given to your accountant or something like that. I’m going to say browse we want to find where we’re going to locate it once again, it’s going to be in this drop down. We’re looking for the second section this time we want to put it in the backup files folder. I’m going to say okay, and that it says do you want to remove the backups after three times here?

I’m going to actually remove that this time so that it doesn’t delete the backups after three times it adds the date stamp as we add it that is good because that tells us which the what’s the latest backup without us having to rename it and date it ourselves. Reminder Four times it’s going to remind us to give us a backup. This is the default for the complete verification, that’s the one I would keep and recommend. We’re going to say, okay, it tells us, Hey, you’re putting it on the same drive that you have on your actual data file, do you want to change the drive? for practice purposes, we’re going to say, No, we’re going to use this location and back it up.

So let’s go ahead and save it. Now it gives us again, the same location where we want to put it notice now it’s a Q, BB file, notice the name has the date and time on it, which is great, because that’ll help us to sort the backup files. When we have multiple backup files. If we want to use them, we want to use the latest backup file typically could take a little bit, a little bit of time for it to backup because it is a fairly large data file. So now we’ve saved the backup file, I’m going to say OK, so now if we go back to our folder and say, Okay, what do we have now in the folder, we now have the the data file and the backup file. So I’m going to make this large.

And we’re in this item. So now we’ve got the backup file, double clicking on it looks similar, but it’s different. If I go into it, this is a QB W. It says backup. I mean, this is a q BB file with an extension QB B, it says backup here versus the data file, whichever go into the data file, which looks like this, and it’s a QBW file. So when I open up the system, it’s going to be opening up this file. If I want to restore to a prior point in time, then I can’t open up the backup file, which is going to be the one we just created, I have to restore the backup file.

So notice, if you have access to backup files in this course, then you might be able to jump to future points in the course or go back in time in the course and rework something with the data to be restructured. However, you got to make sure that when you restore the backup file, it’s going to create a new file. So if I wanted to restore this backup file, then I have to realize that I’m going to restore it, the backup file will remain. And I’m going to create in essence, another data file, which I’m going to put here. And I’d like to name it something slightly different.

So I can say hey, look, this is the this is the data file that I restored. In other words, you got to manage which data file is the current one that you’re working with, you don’t want to mix up your data files, so that you know that you’re working with the latest data file. So five, restore this. Now let’s say I’m going to restore this backup file. And then I’m going to save another data file into this location. So I’m going to go back up top and say now I need to restore the data file, I’m in the program, you could close the current company you’re in but you don’t have to, you could just go to the drop down and say I want to open or restore another data file, it will close the current company file that we are in.

So it’s in the data files. And then I’m going to rename this to something slightly different than this other data file that we have that is the exact same name. So I’m going to say this has a one next to it or before it, let’s say. And that’s going to be our difference between the two data files, it’s now going to restore a QB W file, the actual data file, we will save that and then it should create another file for the new data file.

So there we have it. Now if I go back on over to my to my data over here, we can see okay, what happened now. So now, we have in here are two folders, we’ve got within the data file folder, we got a whole bunch of junk in here, because whenever you have another data file, it puts all this other stuff in it. But now we’ve got mainly these two data files here. The latest one is the one that we lit enabled as one.