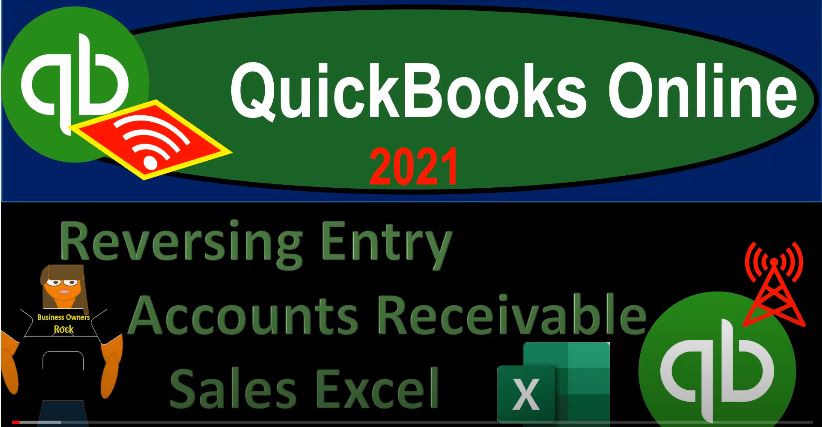 On the left hand side, we’re going to be opening up the P and L Profit and Loss income statement range, changing it up top ending at o 228. To one run in that report, hitting the run Report button to do so close in the hamburger holding CTRL scrolling up just a bit to get to that one to five. Next report to the left, we’re going to open the reports down below once again, this time opening up the balance sheet, the balance sheet report, range change up top ending at point of Oh 228 to one, run it close the burger.

And in the prior presentation, we entered an adjusting entry related to the accounts receivable and sales, in essence pulling an invoice that was entered after the cutoff date but for which the work was done before the cutoff date, and pulling that information back into the current time period by entering a journal entry in order to do so. So right now we’re going to look at it in Excel and think about basically the reversing entry.

Oh 305 to one run that report, the invoice we’re talking about if I go then into the sales and products, scrolling down, we’re looking at this invoice that was entered and it was entered on three, five. So why don’t I do the reversing entry as of three, five, because if I don’t, then it’ll be wrong for like four days it should be I should keep it in there. Up until the point type the invoice is there. But remember that our concept is here is to make a difference between the cutoff period when we make the financial statements correct.

And the accounting period, I want all my reversing entries to be as of the same date, and then make the adjustments periodically sacrificing the fact that we will not be perfectly correct. During the month for some items, we’ll have some timing differences. And those will be then adjusted for periodically at the end of the month, in this case or the end of the year. In some cases. Let’s go on back to the income statement. Let’s see this on the good old Excel worksheet here. So last time, we did this adjusting entry. This is the adjusting entry. When you think about a reversing entry.

You said reversing journal entry. And let’s let’s keep it like that reversing journal entry, let’s say and then this is going to be exactly the opposite. Now I’m not going to try to rearrange the order I don’t care if the debits are not on on top or anything like that. I want to make it as easy to see as possible. So I’m going to put the same order from top to bottom and just change the debits and credits. That’s the easiest thing to do. In my opinion.

And I’m not even sure its opinion, I think it’s just fact, you know, mine happens to be my opinion, but my opinion is oftentimes the actual fact of the matter, as far as I can tell. But in case there’s gonna be, there it is there’s the reversing entry, and then I’ll skip a line, we typically do this second piece as a separate entry, or it’s easiest to see that way, it’s easy to think about it as a separate entry, even though it’s connected when we think about the journal entry on a perpetual inventory system for an invoice. And that’s basically it.

And that’s going to be our transaction, we have the same kind of difficulties we saw before, in that the accounts receivable when I record this in QuickBooks will give us a problem because I’ll have to have a customer related to it or QuickBooks won’t let me record it. The sales tax is something that we don’t want to mess up the the sales tax, I’m sorry, the sales tax is down here.

We don’t want to mess up the sales tax line item in QuickBooks for the little widget sales tax that they use. And the inventory also has a sub ledger that we want to make sure reconciled after having entered this transaction. in QuickBooks, we don’t have those issues in, you know an accounting problem in like a book problem or here in the Excel worksheet, because we don’t have those sub ledgers, but we want to keep them in mind.

Because when we go back to the accounting department, we don’t want to mess them up by messing up their sub Ledger’s. So we want to keep those things in mind. So I’m going to then select these items, I’m going to select the first one make it green, just to represent we are entering that one.

Now, you might want to hide the first two tabs to make sure that you don’t accidentally enter it into the adjusting entry column because we want to enter it in the reversing entry. So it might be easier than to hide column G and H by selecting them right clicking on them hiding them. So that we can know that we’re going to be entering here into this blue area, we got the accounts receivable, so I’m going to go up to the AR, I’m going to say equals and reverse out this 333 99.

So that’s going to make it go back down there. And then we’ve got the sales the income down here. So go on down to the income, going to record this, this is going to be equal to the 380. And then we’ve got the sales tax, which I’m going to record in a separate account. And if you’re working in an accounting department, and you’re recording this information, you probably still want to set up basically the separate kind of account. So that when you give this information to the QuickBooks users, then they will know to set up a separate account and not hit their sales tax account.

And so then we’re gonna have that item, then let’s ungreen a five, this one, we’re gonna greenify this one, so that we can and we’re going to blue a fire because that’s and then we’re going to greenify this one. So we know where we’re looking, we’re looking at the green one, and then the cost of goods sold is down here, we’re always looking at that nice green.

And that’s going to be the 304. And then we’ve got the inventory up top inventory up top should be here, it’s going to go back up. So this is going to be equal to, and then we’re going to pick up the 304. That should then put us back in balance down here. So we got the green zeros on down below. And then if and then if I if I think about this is where we stand as of the cutoff date for what for accrual basis at this point. And then we basically reversed it back out. This is where we stand as of March 1, if we have not closed out anything.

So we still have our income statement here. But we’ve reversed out then these items. And then this would be our post closing income statement. So now we have the income statement that has then been closed out. And these are the adjustments that we have to it meaning this is kind of like our starting point before the accounting department does anything so before the accounting department does anything due to this journal entry, we’ve got a negative income account in here now, which is funny because credit this should normally be a credit and now it’s a debit.

Why would that be? Because we pulled the income back into the prior period. And although you shouldn’t have a negative sales account negative income once they enter the invoice which happens on three, five Fifth, then this will net out against the actual invoice and it will be back down to zero. so this will be wrong for five days until they enter the invoice, which will net it out to zero.

And we already pulled the actual sales item into the prior period it’s recorded in the prior period income that we’d recorded with an adjusting entry. Same with the cost of goods sold, this is a negative cost of goods sold, negative expense shouldn’t happen. Why? Because it will be correct once the actual invoice hits, which happens on March 5, and it’ll zero back out to zero at that point in time. So we’re sacrificing five days of funniness it’d been kind of like wrong, because we want to make it as easy as possible for the cut off between the adjusting process and and then the accounting process.

And to do that we sacrifice some non conformity to the accrual principles in the middle of the time period in the middle of the month. So that’s what we have there. If I unhide, then from FTI, I’m going to unhide from FTI right click, and unhide these items, then we can see the full process here. So we had the the accounts receivable, we adjusted to increase the accounts receivable for the cutoff period at the end of February so that we then include the invoice, then we reverse it back out for March.

So now it’s back out for March in either one of these, the balance sheet items will be the same. And then we’re gonna save an inventory, we decrease the inventory because we’ve we’ve recorded the invoice for our bookkeeping purposes. So there it is decreased as of February 28, the cutoff date. And then we put it back on the books that were backup top 431. Again, no change whether we’re talking about three months, two months in a day, or whether we’re talking about just just March 1 when we’re thinking about the balance sheet, because at the point in time sales tax, we decrease the sales tax.

So this is where we stand as of the cutoff date. Correct for financial statement purposes, then we reversed it for the first day after that. So that once again, we’re back to where we stand for the first day after. And then we’re going to go down to the income accounts for revenue revenue, we increase the revenue because we pulled the income back into the time period in which it was earned even though the invoice wasn’t entered until after the cutoff date, then we reversed it back out. So we’re back to the original point here.

This is where we would be at if we’re talking two months and a day of March 1. This is where we would be at if we had a post closing trial balance as of March 1 with the only activity in it our reversing entry related to this to this invoice that we have entered. Down below we can see the net income this was the starting point on the net income. These are the adjustments that we have made to it thus far up to the blue here up to the equity.

And this is where we stand at this point in terms of the financial statements, then here’s our reversing entries that we have entered which have an impact then if we’re talking about two months in a day, not having closed out the income statement for March and here’s where we stand if we had closed out the income statement post closing trial balance here with the addition of only the reversing entries on the following period that being March