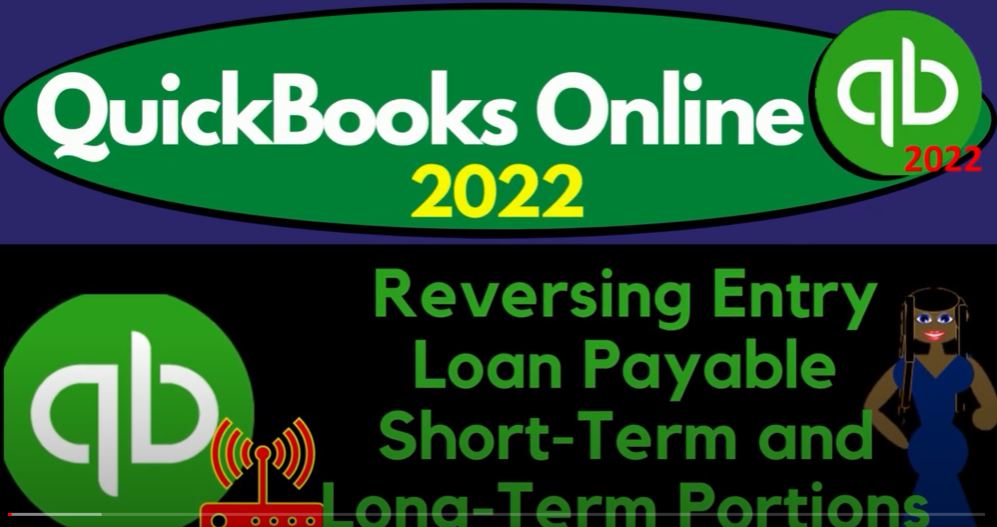 QuickBooks Online 2022, reversing entry, loan payable short term and long term portions and get ready because it’s go time with QuickBooks Online 2022. Here we are in our get great guitars practice file we set up in the 30 day free trial, hold it down control, scroll it up a bit to get to the one to 5% currently in the homepage,

it’s something you can do by going to the cog up top switch to the accounting view down below, we will be toggling back and forth between the two views either here or by jumping on over to the sample company currently in the accounting view.

As that is thinking, let’s see where the reports are located in the accounting view, which is right on the left hand side here under the Reports. When in the Business View,

however, the reports are going to be located we’re in the second tab, by the way, in the business overview here. And then we’re going to go into the reports there, close up the hamburger, we’re going to open some of the common reports up started with the balance sheet report.

Hold on No, it’s thinking, there it is balance sheet report. And then we’ll do the range change up top ranges, they are changing a 1012 to two that one actually stayed the same. But the end point oh 228 to two, that one changed to 28 being the cutoff date,

we’re going to hit the drop down here and make this in terms of months to see the side by side the Jan to Feb go into the tab to the right then going back into the business overview on the left hand side then the reports this time the profit and loss the PnL the income statement closing up the hamburger range change up top from Oh 101 to 202 28 to two.

And then we’ll change this to months again, and run that one Jan Feb tote and then tab to the right, we want to go down to the business overview again,

and then we’ll go up top and do the range change from a 1012 to 202 28 to two and run it. There we have it let’s go back to the first tab or second tab to the balance sheet report that is scrolling down to the liability section in the prior presentation, we broke out their short term and long term portion of the loans.

Just a quick recap on the loans. Remember that you can set them up multiple different ways I would recommend or how I typically set them up, especially if you’re going to have multiple loans, which is quite common, then possibly having a parent account,

which will be the loan payable and then simply listing your loan accounts each individual loan separately possibly indicating it by institution.

But that may not be enough possibly also adding say the last four digits of the loan number so that you can tick and tie and the transactions to the amortization tables like this one, as you make each of the payments.

That’s something that I think would make it easiest for the internal usage. There are other ways you can think about it as well, you could for example, combine all your loans into one account.

And so you don’t have as many accounts and then try to say that I’m going to take and tie or adjust all my amortization schedules as a type of sub ledger that would then tie into that to that amount there. But I think that’s a little bit more work to manage, internally, personally, that I have seen.

I’m just going to record the payments as a decrease to cash decrease to the loan account and then ask my accountant at the end of the period to do an adjusting entry breaking out the interest breaking out there short term and long term portion and so on at that point in time, that method works okay as well too.

And that can make it a little bit easier to record the transactions as they come up given the transactions are not standardized because there’s three accounts that are affected and you have a difference between the interest and the principal,

which makes it something that’s a little bit more difficult or you can’t really memorize the transaction or just pull it in from the bank feed as easily so it’d be nice if you could have a cash basis system when you’re doing In the data input, and then do an adjusting entry possibly at the end of the period,

end of month or year that is, okay, so we were here though, we are imagining that we’re entering the transactions, each each transaction on the bookkeeping side tying out to the amortization table.

But then at the end of the period, I need to break out the short term and long term portion, which we did with the amortization table, we basically just said, here’s where we’re at at this point in time, if I look at then the loan principal only,

not the interest included, that would mean that we have 13 108 54, that is due not including the interest. And so the long term portion is this amount. So we then broke that out on our our financial statements with an adjusting entry.

And again, this is another area where when you’re doing the adjustments, you’re trying to make the financial statements correct, often being done by someone outside of the bookkeeping process.

I can’t easily reconcile between the two, what am I supposed to do break out the short term and long term portion, you know, every time I make a payment that makes it a lot more complex,

you know, that doesn’t make sense to me. So I’d like to do a reversing entry, because on the accounting side, the system that they’re that they’re using, of course, is a good system.

So we’re just going to reverse the entry that was put into place. And we can see that in the registers. So let’s go back to the first tab now. And let’s do this with a register. So in other words, we could do the reversing entry by hitting the drop down up top, and then doing a journal entry,

but there are only two accounts affected. So it might be easier than to go into the register, which we can find in the bookkeeping section down below chart of accounts.

If you were in the accounting view, that would be under the accounting down below. And then the Chart of Accounts accounting and chart of accounts. And so then we’re going to close up the hamburger, and I’m going to go down,

I can use either of the accounts, because they’re both balance sheet accounts. So I could use the short term or long term and go into the register, I’m going to go to the short term.

All of the reversing entries will be as of the first day after the cut off that being three one in our case, memo, I’m going to at least put reversing entry possibly more.

But I’ll at least do that, which is what I’ll do here, we’re gonna have an increase doing the opposite of what we did on the bottom here 50 676 9.59 That I’m going to see if I can find the account.

In the in the Business View, which is somewhat of a challenge. Sometimes it’s going to be loan loan payable, loan payable. Now is this the short term, this is the current line there we want we want the long term right there, that’s the other side.

Not a problem. So that looks good. So let’s go ahead and save it and close it and see if it does do what we want it to. So let’s go close that out.

We’re gonna go to the tab to the right tab to the right, let’s go up top and refresh it running it again, just double checking that we didn’t do anything as of the cutoff date to 28. Because we want to keep that where it is, of course.

So I’m going to scroll down and say that is still broken out between the short and the long term. Let’s go back up and change the date. Then one more period up. Let’s actually make this as of the end of Oh 331 to two and run it so we can See the side by side for Jan, Feb and March. And so we can see the difference, the interplay between the two, the comparison, the side by side, as they say.

So we’re gonna say down here, where am I going, I don’t just just find this numbers with you. Here they are, here’s the numbers. So here’s where we are, we’re at the end of February.

And then we increased it back up to that 69 878 13, which should tie out to the total on the amortization table, meaning it’s the short term and long term 69 878 13 combined together,

so that when we make the next payment, we can record it there according to payment number three, and then we can continue to tie out to the amortization schedule without having the short term and long term portion, messing us up messing up the whole process. If I go down into the long term, we broke it out.

And then we then we took it back out into the long term, so that we only do that periodically, and then bring it back into one account so that we don’t mess up the accounting department when they’re doing what they’re doing.

And they don’t want to break out the short term and long term portion with each with each transaction, because that would be silly, because it’s more work than it’s necessary.

So we’ll do that periodically into the month and or into the year. Alright, so let’s go to the let’s go to the trial balance and check out the trusty TV, see where it’s standing at this point. If your numbers tie out to these numbers, that’s great. If not, try changing the date range. Let’s wait a second.

We’re looking at if your numbers tie out great. If not, then try to change the range like I did. And then sometimes that fixes it. And then we’ll do a journal report at the end so we can diagnose any differences at that time.