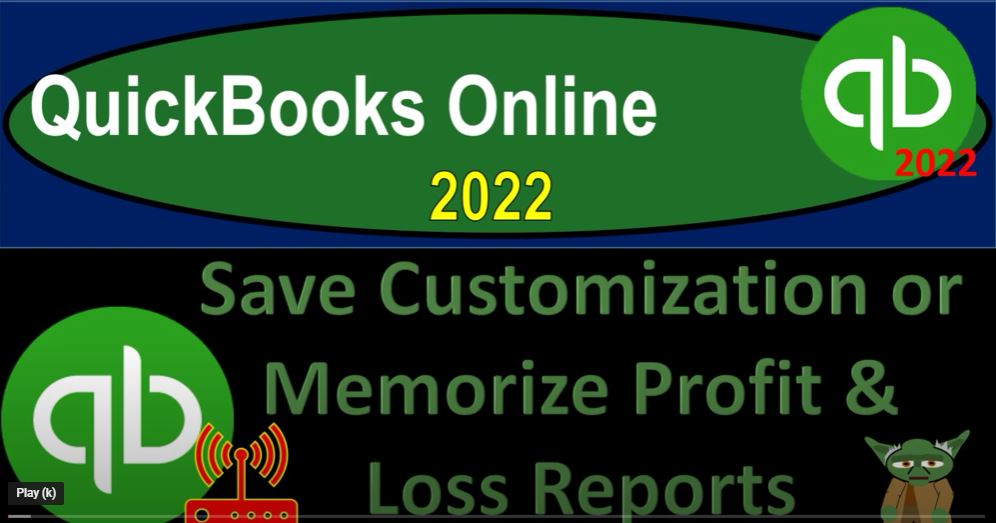 sample company Craig’s design and landscaping services holding CTRL, scroll up just a bit to get to that one to 5%. We also have the free 30 day trial version open just so we can look at the business view as well and compare it to the accounting view. If you don’t have access to it yet.

And as that is thinking, I’m going to go back to the 30 day free trial version just to note where the reports are located in this business view, which is going to be in the business Overview section. And in the reports, if you were to change the view by going to the cost drop down up top and switch into the accounting view, it would look more like what we’re doing here in the sample file.

Back to the sample file. We are in the second tab, we’re going to be opened up the reports the reports now located here in the accounting view on the left hand side, and we want to open up the Profit and Loss report. So we’re going to look at the profit and loss report here. And let’s just stay with that one. For now, I’m going to change the date range up top and say from a 101212 1230 121 and run that report.

Our major goal now is to think about how we’re going to be grouping these items together, and then memorizing or customizing these reports to make the workflow a little bit easier. And so that we can present this reports as easily as possible. We’ve looked at these tools on the balance sheet side of things. So we’re not going to go into it in as much detail as we did then.

But we’re going to add these reports to what we started with with the balance sheet reports. So if we were to give this reports to somebody else, then we have our options here, which is we can email them to them, we can print them out, we can save them as a PDF, and then email as a PDF, possibly zipping the files at that point of time.

So we can then email one file, we can also then export it to Excel, we can use the tool of Excel as well as a PDF printer, such as a cute PDF printer to make all the reports on one PDF file, which could be easier to give to someone like a client could be a nicer thing to do. So it’s all grouped in one file. And we can also go if I go back to the first tab and go to the reports.

And then we go to the custom reports, here’s our custom reports. And then the Manage reports, we can use this tool to make kind of a more formal type of reports, grouping the information together once again creating a one report that we can send in possibly put some text in it and some notes and whatnot, which makes it a little bit more formal. So that’s another method that QuickBooks allows us to do.

No matter what method we do, we might want to then think about the customization of the reports, a couple of kind of categories that we can look at. And those categories are no longer here that we set up in the prior presentation. Because we’re starting over each time with a sample company file, you might want to put the the customization by name, especially if you have your reports versus somebody else’s reports that are working in the same company file.

to give you information and verify that the data input that you are doing as you enter the data using the standard forms, invoices, bills, checks, and so on, is populating as you think it should in your financial statements.

Now remember, if I go back to the income statement, and close the tab, we’ve gone over quite a few different types of reports that we can provide just in terms of an income statement report.

When you get to the comparative reports. You get a lot of income statement reports and And we saw that there’s a lot of balance sheet reports. So you got to think about which reports are most important and which ones do you want to group together, and how are you going to group them together to present them to management, typically, you want to make the easier report up top, and then get into basically more complex reports.

After that, that’s what I would kind of generally do. So you get a comprehensive package of reports, and hopefully draw people in with the more simplified reports up top. Therefore, the first thing you might want to do is, is basically take your standard income statement and collapse it and put this collapse button which is right here, which is going to take all my sub accounts, and it’s going to collapse the sub accounts.

So now I only have a breakout by category and the sub accounts are collapsed. That might be the first report you put on top that will give you the most summarized data. And then you might customize that report we’re going to so let’s do the customization. And let’s say we’re going to take the pennies off of it because it’s an external report brackets, and I’m going to show it as read.

And now it’s nice and fresh, just like a cool glass of lemonade. And we’ve got our report down here. And it’s it’s under our month end reports. So it looks good there. Let’s go back to the income statement tab and do it again, all three surveys, I didn’t hear no bell, you can’t stop until you hear about.

And so now we’ve got the three months. So you’ll you’ll note that as time goes, you can do this kind of report for the year, you could do a quarterly report. So there’s a whole lot of variants that you can do once you do these kinds of comparisons. Note that this one is comparing from the earliest period to the latest period and gives us the total. So you could use a report like this to kind of replace the standard income statement because you still have those total numbers, although again, it’s more complex.

Then on the header and the footer. This is going to be a comparative a, let’s say income statement. Let’s call it income statement. Income Statement by month, let’s say by month because it’s not really a comparative, it’s just breaking out each of the months. And then I’m going to get rid of the report period because that report period isn’t telling us much now and so I’m going to say okay, so there it is.

So now we got the income statement by month. And so if I go back on over to the previous tab, and refresh it again, the reports spoil quickly. And so we’re going to go down here. So now we got the three of them, let’s do it again. The other one might be the other kind of comparison that we want, we might say now I want to compare like two periods the last couple of months.

So this is going to be 1101, to one to 1231 to one. And this time, I want to bring it back on over to the totals, but look at the prior period comparison, previous period, and hold on a second. Now that’s not right, change the date range up top from 1201 to one the last month, and then change the period to the previous period, which is November change, we want the dollar and percent change, run that one.

So I can memorize it, run it. Alright, so there’s that one where we’ve got the change between the two of them. Let’s check this one, again. Custom Field, run it, so that we get this just November. Okay, so there we go. So now I’m going to go up top and say, let’s save the customization on that one, this is going to be number four. Number four, and then save the customization.

Number four, save it. And then if I go back to the prior tab, and refresh it again, now we’ve got the four reports. And then the other common one is that vertical analysis. So let’s do one more of these. And just so we can see how many, we get all these different kinds of reports that you might then, you know, save and just from this one income statement that we’ve created here.

And so now we’re going to say, Okay, let’s do the totals only. And let’s get rid of this, this whole thing, don’t want to do that anymore, run it, let’s change the date range back to the year a 101, to one to 1231, run it. And then we’ll do our vertical analysis thing. So we’re going to hit the we hit the drop down, and we want to compare it to the income percentage of the income. That’s what we want.

So there we got it. Let’s save that one. So let’s customize it. Let’s copy it, so I don’t have to type it again. I won’t spell that one, right two times in a row. better chance lightning hitting somewhere, customize it, save the customization, this is going to be number four, number five. And then we’ll say we’ll put that there and save it. So now we’ve got that. So now let’s go back to the first one and make it and freshen it up again. And now we’ve got our saved reports down below.

And so the next month, the following month, we do this, we can we can open them up a lot more quickly. And if we were to ask someone to provide these reports to somebody as easily as possible, on the end of the month, or a year, whatever method that we use, they should be able to see okay,

I see these reports in order, hopefully, all they have to do is change the to the relevant date ranges, and then compile these reports. And we’ll talk about how to compile them in the future, which of course, again, they could email them, they could print them out and then staple them together.

They could export them to a PDF file and then zip that PDF file so that they can email it as one zip file. They could export it to Excel, and then use Excel and a PDF printer to create one PDF file with all the reports in it. Or they could use this tool that is provided,

which is the management reports tool that can basically add these items to this kind of more formal type of report which could have some text involved in it. Also combining all the reports into a nice, one place that could look nice and professional when you’re giving it to say management