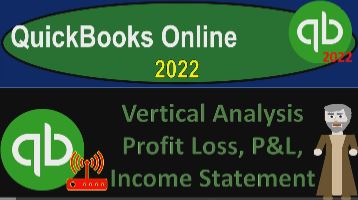 QuickBooks Online 2022 vertical analysis profit and loss P and L income statement and get ready because it’s go time with QuickBooks Online 2022. Online in our browser searching for QuickBooks Online test drive going into the test drive, we’re going to be looking at the United States version of it and verifying that we’re not a robot. sample company Craig’s design and landscaping services holding CTRL, scroll up just a bit to get to that one to 5%, we’re also going to have the free 30 day trial version open.

So we can look at the Business View as compared to the accounting view. If you don’t have access to this yet, that’s okay, we’re going to look at it more in the second half of the course, going back on over to the sample file, we’re going to open up a few tabs to open up our reports in going up to the tab up top right clicking on it.

And we’re going to duplicate that tab, back to the first tab to do it again, right clicking on it doing it again with a duplication. And as that is thinking, I’m going to go back on over to the 30 day free trial version. So we can look at where the reports are located in the Business View,

which is in the business Overview section. In the reports, if you were to change the view to the accounting view by go into the cog drop down and then go into the switch to the accounting view, you would have the same kind of view that we’re looking at here with the sample file. And let’s go back to the sample file to see that view. Second tab now open, let’s go to the reports, which are now on the left hand side right here in the reports. And we’re then going to close the hamburger up top.

Let’s start off with the Profit and Loss report the P and L and we’re going to build a vertical type of analysis with it. Let’s do the range change up top changing the range from a 101 to one, hold on a second. Oh 101212 1230 121, run it. And then we’ll go to the tab to the right to open up that balance sheet report.

Going down to the reports these being our major two financial statement reports the two big guns, the big guys, the main reports. In other words, that’s the point I’m trying to get across. These are like the most important ones, reigns change a 101 to one to 1231 to one, we’re going to run that one as well. Let’s go back then to the income statement.

So the income statement representing our performance over time, we looked at last time a horizontal type of analysis comparing one period to the other. And taking a look at the change that could happen over time in terms of dollar amount, and percent. Now let’s take a look at a vertical analysis. And this will be comparing everything to basically the main function or use of the report.

And let’s do a quick test or thought of what we did on the balance sheet report. Because this type of vertical analysis will be applied a little bit differently, typically, let’s go back to the balance sheet. And you’ll recall when we did this vertical analysis, we just hit the drop down up top. And we said we want to half a percent of the column percent of the column four or five or and then there it is.

And then it took the percentages of the total. So the assets, for example, each line item, we took the asset and divided it by the total assets to get the percent of the total being able to kind of break something out in terms of what it what’s its percentage of the total, which you might be familiar with.

Or it might make sense to think about it in terms of, for example, a financial portfolio, when you’re trying to say how much do I have invested in stocks versus bonds, and so on and so forth, which you might do by basically a percentage type of calculation. On the income statement, we’re not going to have the same kind of thought process because we’re not talking about total assets.

We’re talking about performance over time. And we’re starting to see how well we did remember the analogy being we’re starting over at zero, like starting the domino over when we’re driving a car, and we’re trying to see how far we’re gonna go in, say, a month, for example. So that’s what we’re doing here. So we want to compare everything to the goal of the income statement.

So to hit the drop down, we’re then going to say I want to take a percent not really of the column, we’re typically going to want the percent of income is the one we want generally here, and then we’ll run it running it and let’s pull up the trusty calculator and see if we can make some sense of it. Is there some sense that can be made I like making sense?

Throw some some stuff in the oven and see if we can cook up some sense here. So if we got the total jobs these are all empty Some line items up top. So so obviously, if I took the income, this, this top half would kind of make sense because we’re comparing it to the income line item. So if I took this 473 6.47 divided by the total income, which is down here, and you could tell because it has the 100%, next to it, divided by the 1020,

point seven, seven, we get the point four, six. And if I multiply that times 100, we would get the 46.43. About so on the income line, and that kind of makes sense, because we’re doing a similar kind of process, as you might be doing with total assets, you might then think, and this income line item is, of course, 10, two

Oh, 2.77 divided by 10, two, oh, point seven, seven, which is one, or multiplied times 100 100%. And then the expenses, you might say, well, I should be doing the same thing, comparing the expenses to the total expenses on down below, but no, but no, we’re comparing them to income, because the goal of the income statement, and the business in general is basically revenue generation. So we’re comparing it to the objective of income.

So you can think of that as basically for every dollar you’re getting, you know, on average, you’re keeping 16.6763% About or six 13.63 cents, about of every dollar that you’re earning basically, in revenue is one way you can kind of think of that. And okay, so that’s, that’s the general idea of it very common type of type of statement.

And once again, if you’re looking at the income statement, you’re looking at performance type of statements, and you can compare the dollar amount to prior periods. But it’s sometimes useful to calculate it on a percent basis, especially if you’re comparing to other types of industries. If you compare to other industries, you’re benchmarking to the industry standard,

So for example, if you are looking at a company that has inventory, you might be quite concerned with the level of the cost of goods sold the inventory, that you’re selling the expense of the inventory that you’re selling, as compared to the income because that’s going to be a very significant a line item, typically, for that type of business, not so much here, because we’re talking about a landscaping business. So of course, it’ll be dependent on the business.

And you’re going to be wanting to look at your your expenses, and so on as percentages of income. And you might be able to glean some more information, some more ideas for decision making purposes into the future, then you could, if you were trying to make a comparison, and you were just looking at the dollar amounts to another business that has different dollar amounts.

Okay, let’s do our standard standardization up top, we can then say let’s do some customization of this report. customizing it, we want to let’s get rid of the pennies here. Let’s make the bracketed numbers, bracketed or the negative numbers bracketed. And then make them red so they pop out and then we’re going to go down to the header and the footer.

We’re going to change the name was changed the name to this time a verb to call vertical. Uh, now, uh, now lysis says, I can’t spell it. Analysis income statement instead of Profit Loss just to switch things up. We’re going to get rid of the stuff on the footer. Get rid of the stuff I don’t like when they write stuff on the foot. And then we’re gonna say okay, run it. That looks pretty good. Snazzy looks snazz snap As.

So if we go down, there we go. Nothing’s on the foot. Okay, so then obviously we would we could then save this if this is a report that we want to be giving to our clients and or to our supervisor or something like that to management,