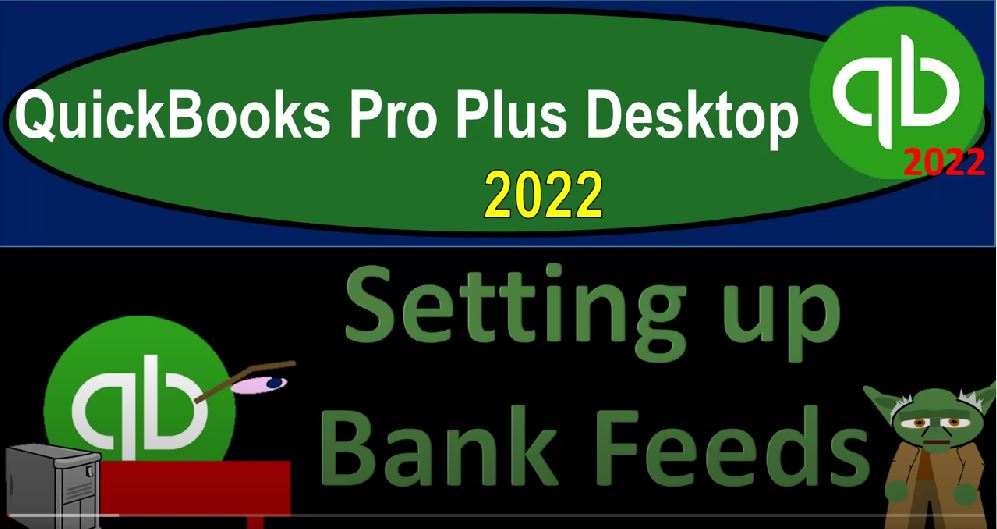 QuickBooks Pro Plus desktop 2020 to setting up bank feeds Get ready because we bookkeeping pros are moving up the hilltop with QuickBooks Pro Plus desktop 2022. We are in our QuickBooks bank feed practice file going through our standard setup process with the view drop down the open windows list, which is on the left hand side company dropped down homepage in the middle, and that I maximize that homepage to the gray area.

Now we’re going to set up our bank feeds the actual process of setting up the bank feeds linking to the banks, fairly straightforward, fairly, fairly easy at least to start out the process that being in the banking drop down in the bank feeds and then set up a bank feed or an account.

However, before we look at that process, you do want to consider a few different things one is going to be how much data are you trying to pull in from the bank feeds meaning are you looking for more current data, you’re starting from this point forward? You only need like a month or so worth of data that be populating into your system? Or are you for example at the end of the year,

and you know that tax time is coming up and you’re saying hey, I got to import a whole year’s worth of data into my system or possibly multiple years worth of data and do some tax returns that I have not yet done or something like that. And so you’re going to significant further amounts back in time pulling in the data into the system.

And so once you have that understood, you also want to be thinking about what does my bank give me with regards to how far back I can go with the bank feeds. So you can go into your actual institutions, your bank, Chase, Bank of America, and so on Wells Fargo, whatever your bank may be, and then see what their terms are with regards to the linking process how far back you can get the data coming from.

You also want to consider the cutoff date. Meaning Where do you want to stop getting the data from and then go forward from that time, noting that we want to be careful not to be missing data, meaning we haven’t pulled the data in from the bank statement. And we want to be careful that we have not duplicated data, meaning we pull the data in twice and now have recorded it two times.

The process of entering the bank feeds as well as the bank reconciliations will help us with those two tasks as well. Also note that as we add the bank accounts, you’re going to be adding check type of accounts, which you could add during the process of setting up the bank feeds. Or you could go to your lists drop down chart of accounts. And then notice we don’t have any checking account types here. If I was to go to the account, drop down or rise up and say I want a new account.

But we’ll show you how to go through the full process. And then we will be importing some data into the system. In future presentations, there’s two ways that you can basically get the information from the bank into your system. In essence, using a similar feature of the bank.

The type of feature one is that you actually connect to the bank, the bank actually feeds in to your system periodically, noting that on the desktop version, of course, we have to make sure to allow it to give the connection to the online periodically, so it can then download the information. The second is for us to actually go to the bank itself and download the transactions in a format that will be uploadable into the QuickBooks system, that being either a QuickBooks type of file for the bank fee file,

which most banks have these days, or an Excel type of file or spreadsheet type file, usually a CSV file, which is like an Excel file without without all the Excel kind of formatting. That second method may be one in which you get more data from the bank. In other words, the bank might say I’m only going to go so far back, I’m not going to go one or two years back with the bank feeds to automatically put them into your system.

You can’t go that far back. But maybe you can download the data and then import it into your QuickBooks system that way, and go a little bit further back if you need to go further back with more data. So we’ll do that in future presentations. If you’re connecting to the bank though, you first choose the institution you could choose from Here’s one of them to the right here are some, like common banks on the right hand side. Or you can type it in here.

Now, the thing that’s a little bit of a problem these days with a QuickBooks Desktop is one of the big ones that you might say, Hey, I would like to track is PayPal, for example. And I don’t believe QuickBooks Desktop currently has the capacity for the online connection to PayPal. But I think that the online version does. So that’s something that hopefully they’ll pick up at some point in time, we might be able to do a workaround with that here.

Because you could still imagine you can download the CSV files from your pay pal and possibly download them periodically, and then just install them or upload them into the QuickBooks system. So we might experiment with that in future in future presentations, but just be aware that, that they don’t currently have the PayPal, which could be important for certain types of businesses, for the tracking.

So those next steps could differ, depending on the institution. If you have a problem with those next steps to do an automatically, then you can contact your actual bank. And hopefully, most large institutions are well aware of these bank fee type of transactions. and QuickBooks is one of the largest type of institutions, you know,

the banking software that uses them, meaning they’re well aware of them, even other accounting software will often use the QuickBooks type of data file in order to import into their system. So this is basically as far as we’ll go at this point, then we would link to it. And then we would say, of course, we would be done.

And we would have the link at that point in time allowing us to download directly from the bank, we’re not going to download directly from the bank. Here, however, we’re going to do the second step, because that will make it a little bit more transparent for us to see the data, you can go back a little bit further, we’ll get practice with downloading the data from a financial institution, and then uploading them to the QuickBooks software.

So we’ll get to the same point whether you’re connected to the bank feeds, or you just upload this the software or the data from the bank. And we get to practice uploading the data from the Bank, which might be something relevant to you, even if you plan on connecting to the bank, if you want to get the data that’s going a little bit further back,

which might be more available to you by downloading it. So I’m going to close out the process here. I’m going to close this out. And so what so we’ll continue on with the creation of an account and then uploading the data in a future presentation.