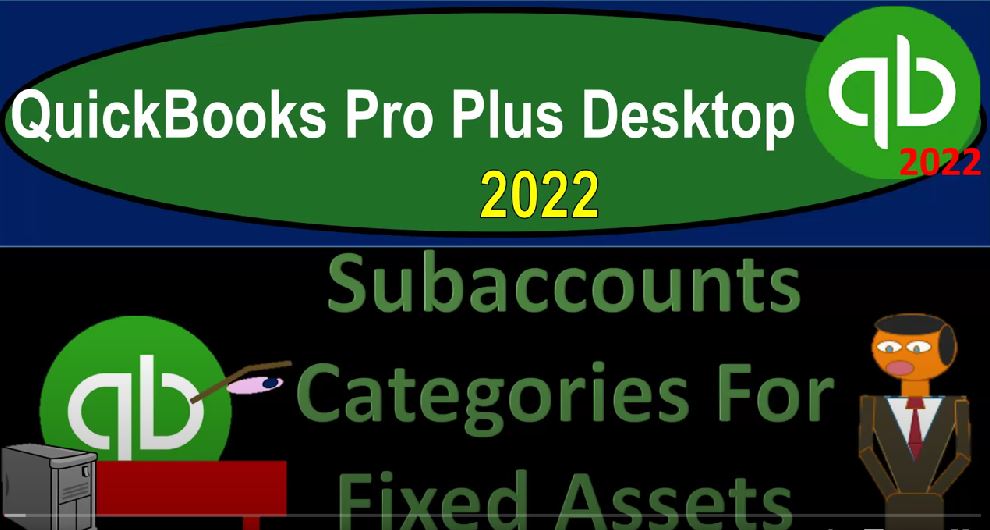 QuickBooks Pro  Plus desktop 2022 sub account categories for fixed assets get ready because we bookkeeping pros are moving up the hill top with QuickBooks Pro Plus desktop 2022. Here we are in our get great guitars practice file going through the setup process with the view drop down the open windows list on the left hand side company drop down home page in the middle maximize in that home page to the gray area. Reports drop down company and financial starting off with that balance sheet, customizing it up top with a range change, oh one to two to 1231 to two fonts and numbers picking that font up to the 14. And okay, yes, please.

And okay, this is where we’re going to stop this time, because we’re focused in on the balance sheet item of the fixed assets. And we’re thinking about how we want to be grouping the fixed assets as we have done thus far, we have been using the grouping that has been given to us by QuickBooks in the chart of accounts that have been set up when we started the QuickBooks system. And the typical policy that we would have as to should I include it in fixed assets or simply expense, something will usually be if it’s something that’s made usually a larger dollar amount item, something that we’re going to use for multiple periods in the future.

And most likely for small businesses off, often you’ll be looking at the tax code as well you say well do I have to include it as a fixed asset for taxes, then you’re going to put it up top as a fixed asset as opposed to expensing it at the point in time of purchasing. And then you’ll have to record the depreciation which is a bit more complex of a system to be using. As you’re using that system.

Then, as we put things on the books as the fixed assets, we want to be supporting have like a sub ledger related to the fixed assets. However, that sub ledger is often a little bit more complicated and a little bit different than the accounts receivable in that we might not give all the details of the sub ledgers in the QuickBooks system, we might depend on an outside system, possibly the tax software for multiple different reasons. Now we do have a list, you could go to the lists drop down and go to the fixed asset item lists, which can help you to kind of kind of organize your fixed assets as well. I think we have another section talking about the fixed assets item list that you that you it’s kind of a specialty area you could spend more time to look in on.

But even when you use that list, it’s not perfect. And one of the reasons that you might depend on say, your accountant at the end of the year is because no matter what happens, you’re still going to have to provide them with the information related to your fixed assets, because they will have to calculate the accumulated depreciation on a tax basis, at least. And if they’re going to calculate it on a tax basis, then your decision is do you want to just record your items on a tax basis to or do you want to have a book basis which will be different, possibly more accurate from from an accounting standpoint, but will then require these two these two schedules to be generated? That’s a lot of detail that gets kind of complicated in terms of the complexity of the sub ledger.

So here’s like an example of a sub ledger. And it gets a bit more complicated to do that. And so you might depend on the tax software to do that. Also, when you’re thinking about these kinds of accounts, then anything that’s in the past from the prior years, if it hasn’t been sold will remain the same. So if you have the ledgers already set up or the schedule setup, possibly in the tax software, you only need to provide your accountant with the changes that increases purchases and disposals for them to update their depreciation schedules, then they might be able to provide you then with the adjusting entries that you can do on a yearly or monthly type of basis.

So that’d be the the general idea. Now if you’re going to do that, then your next question was going to be well, how should I group my fixed assets here, because I could just do the two groupings, they only gave me two groups for the fixed assets and just have this full lump sum of, of basically furniture and equipment, and then one account called accumulated depreciation.

Your other option would be disabled, maybe I’m going to have multiple accounts that will tie into the sub accounts on the sub schedule, which isn’t in QuickBooks, I’m going to use them for my tax software. So you might talk to your tax accountant. And they might give you a schedule like this, which has the furniture and fixtures and machinery and equipment, which are standard kind of categories from a tax standpoint. And if you’re going to use their schedule, it might be easiest to mirror what they have. So you could just record the total down here and keep it keep with what we have and just recorded in one account.

So we’re not going to give all the detail like the so for the chair, and so on in our books, we’re going to just set up these two categories, and then depend on the schedule to basically update periodically from the tax side of things. That’s our general concept. So if we go back into QuickBooks, then I’m going to say, Okay, I’ve already been putting this information into here, what I’d like to do is create two accounts now, instead of just furniture and equipment. And then I’m going to break out between those two accounts, and then two accumulated depreciation accounts that are relative to those those, those two fixed asset accounts.

So ACC D pre equipped, we’ll call it equip. And then we’re going to make that a subcategory of the machinery and equipment. Right there. And so there we have it. And we’ll keep that there. And so I’m going to say Save and Close. So now we’ve got this kind of setup, where we have the furniture and equipment and a subcategory related to it and the machinery and equipment and a subcategory related to it. So let’s look at the balance sheet, see what we have thus far. So now we’ve got it’s only showing this one account because there’s no activity in in the other accounts.

And now what I would like to do is remove and make a journal entry to post into these categories that we have over here because you might be saying, well, what do I do if I already have these categories set up? I’m not going to reallocate that 5000 We just purchased by going into the transaction, we could do that. I’m going to enter a journal entry taking 5000 out of this 103 And recategorize it into the the other account, which is going to be the machinery and equipment.

And I’m going to remove, decrease, in other words, the amount here, which is going to be for the 5000. And it’s going to go into the other account, which is machinery and equipment to and you might say adjust to the deep tax tax, decrease schedule, something like that. And then that’ll take it down to 95, which matches basically, the worst, we should be at the 9898. But that’s because they have the accumulated depreciation up here, I think if I go to the balance sheet, let’s check it out on the balance sheet, we’ve got the 98, right there in the furniture and fixtures.

Now, we’re going to talk more about the calculation of the accumulated depreciation and depreciation expense and the adjusting entry column. But once we get to those items, then you can see you can you can get the book value per category. And those categories still represent then a lot more detail a list of the actual things that we are having with regards to the fixed assets, those things, which we might then use our accounting software or tax software to give us the supporting documentation for it, and then be able to add or subtract to it periodically throughout the month or a year, because there’s not going to be a whole lot of changes, hopefully, to the equipment because we don’t purchase or dispose of equipment on a rapid basis.

However, it’s not quite as necessary. In my opinion on the income statement, you might just record it as one line item on the income statement because it’s going to record depreciation it’s going to roll into then the net income. And what you’re going to be tying out is these items up top, it might make it a little bit easier to tie these items in to the sub schedules that might be generated from tax software. If you have the same categorizations and the subcategories might be useful, it might be easier not to have the sub categories. It’s up to you. But it might be useful to have those subcategories and then tie in by a category by category basis.

So that’s going to be it let’s take a look at the trial balances where we stand on the trial balance at this point. If we go to the accounting and the taxes trustee Trial Balance range change, oh 101 to two to 1231 to two, customizing that report fonts and the numbers change in the Font up to 14. Okay, yes, please. And okay. This is where we stand at this point. If you’re checking the numbers, if there’s something off on all we changed this time was the balance sheet items up top.