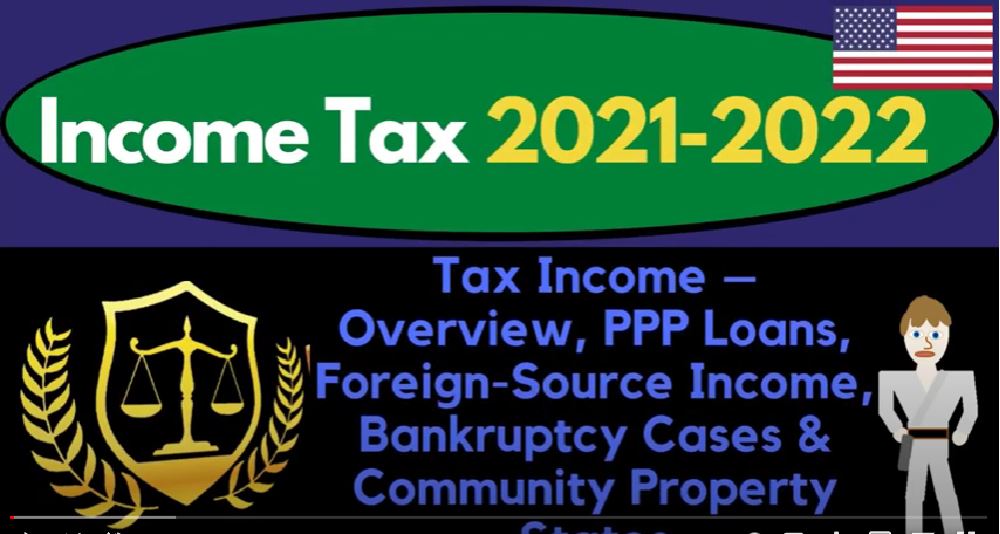 Income Tax 2021 2022 tax income overview PPP loans, foreign source income bankruptcy cases and community property states get ready to get refunds to the max dive in into income tax 2021 2022. Most of this information can be found in the form 1040 instructions tax year 2021 found on the IRS website irs.gov, IRS dot G O V, we’re looking at the tax equation, the income tax equation focusing in on that first line of income.

Note that the primary area where you’re thinking about income being reported is the first page of the form 1040, which looks like this, we got line one, which is the most common form of income,

And when we’re thinking about income, and this is the schedule one, by the way, where we have additional income and adjustments that can then feed into the first page of the 1040. So this is just one added scheduled with other income line items that will feed into page one.

which is normally you want to look good, you want to earn revenue, and you want to have minimal expenses, so that your net income is high for taxes, that’s all flipped on its head, which is kind of some of the problems with the taxes,

there’s a disincentive with taxes to some degree, because for taxes, you want it to be the opposite, you want your income to be low, you want to look bad, and you want your expenses, or in other words, deductions typically, to be high, because that would lower your income, which for taxes would mean if it’s an income tax, you’re going to be paying less tax.

So when you’re thinking about the income line item, ideally, what you would like to have is income that you actually earned, but income that you don’t have to report in taxable income, because you’re legally not required to.

So in general, when you’re thinking about income, then is that the IRS general rule is everything. That is basically kind of a receipt of some kind should be income unless the IRS says otherwise. So if you’re getting something that you think is going to be income, the general rule for the IRS is the catch all rule,

everything’s basically income, as opposed to and unless the IRS specifically says that it’s not income, that’s kind of the position that they’re going to try to hold or try to take here.

also see publication five to five. Now also note that the income line item is one of those areas where the IRS is going to be pressuring most likely to pay or to try to give the information to the IRS so that they can have a double check some clarification on the income that’s, that’s going to other people.

So for example, the most common example is the w two type form, the IRS is going to be requiring employers to not only give you as an employee a W two form, but also the IRS 1099 forms are going to be a similar kind of situation.

and you still are supposed to report it. Because basically the IRS is saying you got to report anything that could be basically income or fall into the category unless they say specifically otherwise.

And then they go on top of that and try to pressure the pay earner because that’s where the leverage is at, to issue the forms to the IRS to the IRS could verify that income has been reported, like WT forms like 1099 forms and so on.

We’ll talk more about that in future presentations but for now forgiveness of the paycheck Protection Program PPP loans, these are loans that went out in response to the pandemic,

if people qualified typically this is going to be a business related item, there was a bunch of questions when the laws were rolling out with regards to them,

because there was a forgiveness conditions if certain conditions were met, you didn’t need to pay back the pay to the paycheck Protection Program loans. And if normally, a bank forgives the loan that looks like income, because you basically got free money at that point in time you took out a loan, the bank saying you don’t need to pay them back. Well, then is that going to be income?

So the questions related to the paycheck Protection Program, forgiveness come down to well, is it going to be income? Is it going to have a tax implication?

Do we have reporting implications related to it? And if I have to report the income, when to report, when do we report it at income as income? Because obviously, when I got the loan, I had not yet met the conditions.

you do need to report certain information related to your PPP loan reff procedure 2021 Dash 48 2021 49 IRB 835 permits taxpayers to treat tax exempt income resulting from the forgiveness of PPP loan as received or accrued one as and to the extent that eligible expenses are paid or incurred to when you apply for forgiveness of the PPP loan.

So that was kind of one of the conditions right you had to basically get the loan you got to spend the money in accordance with what they wanted it to be spent with and then tell the tell the bank that that’s how you spent the money in order to see if you qualify for the gift forgiveness.

And then three when forgiveness of the PPP loan is granted, if you have tax exempt income resulting from forgiveness of a PPP loan, attach a statement to your return reporting each taxable year for which you are applying revenue procedure 2021 Dash 48 And which section of revenue procedure 2021 Dash 48 You are applying either section 3.0112 Or three.

Any statement should include the following information for each PPP Loan One your name address itin or social security number two a statement that you are applying, you are applying or applied section 3.0112 or three of revenue procedure 2021

Dash 48 and for what taxable year 2020 or 2021, as applicable. And that’s where the you know, the kind of cut off information is going to be relevant in terms of you know, when when this took place. Three, the amount of tax exempt income from forgiveness of the PPP of loan that you are treating as received or accrued for what taxable year 2020 or 2021.

And for whether forgiveness of the PP loan has been granted as of the date you file your return. So that again, special kind of case here with the PPP loans, if it’s something that applies typically a business related item might be something that would apply in that instance, foreign source income.

So another kind of confusing topic with regards to income generally foreign source income, you must report on earned income such as interest, dividends and pensions from sources outside the United States unless exempt by law or a tax treaty.

You must also report earned income such as wages and tips from sources outside the United States. If you worked abroad, you may be able to exclude part or all of your earned of your of your foreign earned income for details, you can see publication 54 and form 2555. So if that applies to you, then those publications typically can be found on the IRS website irs.gov.

2014 Dash 552014 Dash four four IRP 753 available@irs.gov. To find out if you can elect to defer tax on the undistributed income reported distributions from the foreign pension plans on line five A and five B foreign accounts and trusts you must complete Part Three of

and reported on the estate’s income tax returns includes earnings from services you performed after the beginning of the case, both wages and self employment income and income from property described in Section 541.

Of title 11 of the US code that you either owned when the case began or that you acquired after the case began and before the case was closed, dismissed or converted to a case to under a different chapter. Because this income is taxable to the estate don’t include this income on your own individual income tax return.

you must also include a statement that indicates you filed a Chapter 11 case and that explains how income and withheld income tax reported to you on Form W two and 1099 are allocated between you and the estate.

So obviously, this would be somewhat of a special time type of situation. But there’s unfortunately more of these chapter 11 bankruptcies or bankruptcies in general, due to the problems that were happening for COVID.

So this is going to be something you want to be aware of community property states include Arizona, California, Idaho, Louisiana, Nevada, New Mexico, Texas, Washington, and Wisconsin.

If you or your spouse lived in a community property state, you must usually follow state law to determine what is community income and what is separate income.

And if you’re looking, you know how to do that up, then you want to make sure that you’re taking into consideration the regulations are in conformity with the state that you’re in, whether it be a community property or not.